Another busy Saturday, or the beast was tamed, then eaten.

As usual, the dogs and cats acted as my alarm clock, getting me up at 6am to feed them. They know better than to bother daddy, for he sleeps like the dead. Since I was up so early, might as well get a head start on spring cleaning, and clean I did. Stripping the bedroom first; sheets, pillows, blankets formed a queue for the washing machine. Rugs and towels from the bathroom followed suit. Out came the vacuum, and the rugs that could not fit into the washing machine felt the wrath of the cleaning banshee. The linoleum and ceramic floors were not spared either. Good thing is was a nice day outside, weather wise, as the dogs were not allowed back in with dirty paws to track on my clean floors and rugs.

By 4:30 pm, I was done with all the cleaning I could muster, and began to start dinner. The oven was set to 400F; sweet potatoes were pricked several places with a fork, rubbed with olive oil, sprinkled with coarse sea salt, and in they went for a full hour of baking (not wrapped in aluminum foil for this makes them soggy from the steam). A half hour later, I was preparing the Elk to be cooked the way Charlie had instructed me to. First the steak pieces were washed in cold water; then lightly dredged in flour which contained a mixture of my chosen seasonings: onion powder, garlic powder, salt, ground black pepper, paprika and brown sugar. These are some of the items I usually put in my rub mix; and Charlie said to go with what I know when it came to seasonings. The proportions, for those who wish to know were: 2 cups flour, 1 tsp each of all the seasonings, 2 Tbsp brown sugar; mix all together thoroughly. 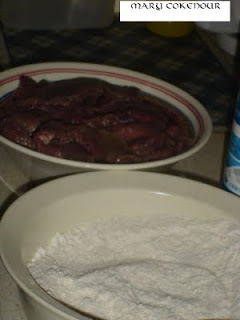 I heated my largest nonstick skillet at medium-high heat, with a ½ cup of canola oil and began to cook the Elk. I let the first side of the steaks lay in the pan till blood began to show, about 2 minutes, then flipped them and did the other side the same way; draining the cooked meat on paper towels till all were done.

Then came the gravy preparation; there was about ¼ cup of oil remaining, so I added a ½ cup each of sliced mushrooms and onions and let them cook until softened, about 5 minutes. Then came a ¼ cup of flour and began whisking till a roux was formed. To this, and still whisking was added first 1 cup of warmed heavy cream. When fully incorporated, then 1 ½ cups of beef broth was whisked in; I let the mixture come to a full boil before turning off the heat. There was no need to add extra seasonings, since the oil had been infused with it from cooking the Elk.

The sweet potatoes were done (the skin is a little crispy, and the meat inside is very soft); cutting them open, I slathered on 2 Tbsp of softened butter, a tsp of brown sugar, a dash each of cinnamon and nutmeg. Dinner was served, and what an awesome meal is was! Everything was so good, and mixed together so well….sweet, savory, salty all came together perfectly. I immediately called Charlie afterwards, thanking him profusely for the Elk. I most certainly will do this again!!! 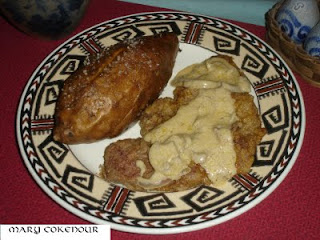 However, by 8pm, the exhaustion of the day caught up with me, and I was out like a light. Yes, it was another busy Saturday, but I can’t complain.

Posted by Mary Cokenour at 2:57 PM