The Third of the Pizza Trilogy - Sicilian Pizza

In a pizzeria far, far away from Utah, square pieces of pizza are being devoured; and I am full of envy and want.  Anyway, this is the third installment of pizza making - Sicilian Pizza.  In case you missed the first two; New York Style was done on January 21, 2011 and Chicago Style was done on February 18, 2011. 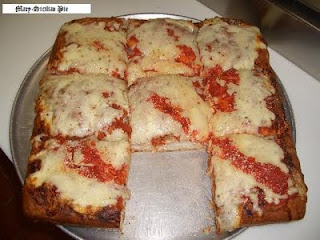 Sicilian Pizza
This type of pizza originated in the Palermo region of Sicily.  This is a thicker dough than used in the round type of pizza (Napolitano), baked in a heavy aluminum rectangular pan. In the United States, it is mainly seen in New York and New Jersey pizzerias, and whether the cheese goes under the sauce or on top is dependent on each individual pizza maker.  In Chicago style pizza, the cheese goes beneath the sauce, the crust is sweeter and the pizza is baked in a round pan.  “Tomato Pie” is a Sicilian pizza that has a thick layer of sauce over the cheese and is topped with a layer of diced or thinly sliced Roma tomatoes.
How to Make the Dough
Ingredients:
2 (.25 oz) packages of active dry yeast
4 cups flour
½ cup warm water (about 110F)
1 tsp salt
1 cup cool water
2 Tbsp olive oil
Preparation:
In a small bowl, combine the yeast with a ½ cup of flour and the warm water; cover with plastic wrap and allow proofing for 15 minutes; stir afterwards to deflate.
In a large bowl, combine remaining flour, salt, cool water and yeast mixture.  Turn the dough out onto a floured board and knead for 15 minutes.   Clean the large bowl, lightly dust with flour and return dough to it; cover with plastic wrap and let rise for 1 ½ hours.
Preheat oven to 450F.  Brush the bottom and sides of a 17 ½” x 11 ½” x ¾” heavy aluminum baking pan.  Punch down the dough, return to floured board and roll out slightly.  Place dough into pan and stretch out to all sides, leaving a lip all around.  Let it rest for 15 minutes before adding toppings*.
Bake for 30 minutes or until crust is golden brown.
Makes 12 servings.
*Note: toppings would normally be a layer of sliced mozzarella cheese and an evenly spread layer of sauce; other toppings such as meats and/or vegetables can then be placed over the sauce. 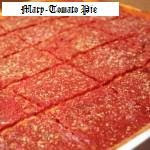