Yesterday, December 26th, was my birthday and I am 21...again.  You know how some women, when they're about to turn 30 decide to be "29 again"; nope, not me, I'm 21.  Someone on Facebook posted one of these quizzes, one about your mental age; well mine came out to 28, so see, I still don't even qualify to be 29 again anyway.  If you're a reader, and hopefully a follower, of my travel blog, you can tell from my adventures that becoming and feeling "old" is not on my agenda.

Actually, I have my life pretty much planned out to the age of 200.  "Impossible!", you say, but why; why shouldn't we all have expectations of a very long life and do what we can to make it all worthwhile?  For my first 50 years of life, I lived on the East Coast, primarily in New York and Pennsylvania; at age 50 though, I moved to Utah.  For the next 50 years I intend on enjoying life in the Southwest, exploring Arizona, Colorado, New Mexico and Utah; maybe even get to a few other states out here.  That takes me to age 100 where I intend on going to Europe and spending 50 years exploring England, Scotland, Wales and Ireland.  I've been a "ghost hunter" since about 1999, so experiencing the haunted castles of these countries is number one of the to-do list.  Roy and I, oh yes, my hubby plans on doing all this with me, want to also visit all those places from our favorite British mysteries: Midsomer Murders, Miss Marple, Hercule Poirot, Sherlock Holmes, Morse.  Our biggest thrill would be to meet Doctor Who, and Captain Jack Harkness (Torchwood); perhaps a Cyberman and Dalek too.  "Ridiculous!", you say; but then again, you're the old becoming old with the nay saying, not me.  Which takes me to age 150 when Roy and I intend to head off for Australia, New Zealand and whatever other lands are in that area.  "Why?", you ask..."Why Not!!!"", I say.

You have to admit these are pretty adventurous goals for a woman who wasn't supposed to have even been born, or continued on living after being born.  No, no; I was not planned; I was supposed to be born a male and named Stephen.   Oh I got the day of birth correct, December 26th, Saint Stephen's Day, but I got the sex all wrong, born with the wrong genitals and all that comes with it.  I did get very sick after I was born, doctors thought I would die, but nope, I lived; and messed up the plans and lives of family members...or so I was led to believe for so many sad years.  With the help of a couple of friends, and most especially Roy, I accepted myself, developed love for myself, and realized that these family members brought their own misery upon themselves; and missed out on a wonderful chance to enjoy a wonderful female...ME!  I didn't quit, I didn't give in, I didn't commit suicide; I knew my death would make others happy and I'd be damned before I'd allow that satisfaction.  That past, however, is past and cannot be changed; now I'm living everyday to its fullest and having a great time!!!  I truly hope what I've just written inspires someone else to pick themselves up and say, "Yes, I am worth every bit of living!!!"

Anyway, last night I cooked up one of the most delicious steak dinners I've ever eaten.  "What!?!  You didn't go out for your birthday?"  No, Roy was out of town on business, but promised to take me to one of our favorite Mexican restaurants when he returns; so it was up to me to treat me. 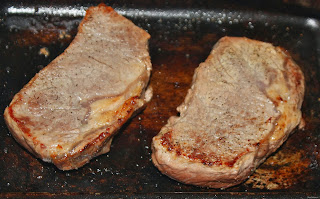 Steak; I purchased two Rib Eye (one for my birthday, and one for a weekend meal) that were a half pound each, 1 and 1/2 inches thick and very little fat.  I seasoned both sides simply with cracked black pepper and crushed sea salt.  First I preheated the oven to 425F and sprayed an aluminum baking dish with nonstick spray.  For ten minutes I seared one side of the steak in the oven; ten minutes for the other side; I reduced the heat to 350F and let the steaks cook to medium-rare for another 10 minutes. 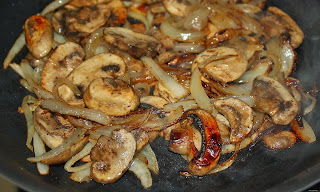 While the steaks seared, I sautéed sliced mushrooms (8 ounces) and a julienned onion (large) in a large skillet; three tablespoons of olive oil on medium-high heat; again simply seasoned with the black pepper and sea salt, with a dash of garlic powder. 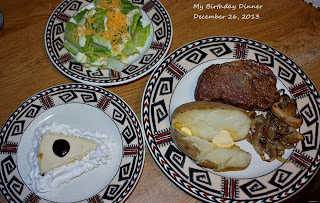 Once the steaks were done, I added a baked potato and a small side salad (Green Goddess dressing and shredded Cheddar cheese).  For dessert, a slice of New York Style Cheesecake with whipped creamed and chocolate sauce.  "Holy Moly Mary, you're not supposed to eat all that!!!"  Hey, it was my birthday, and I deserved every bit of it.  ...and now to make you even more jealous, my blood sugar two hours after was only 97...97!  Another three hours later, I was ready for bed, took my blood sugar and it was only 112.  Next morning, I found I had lost a half pound....oh yeah, you're all jealous and you know it!

Overall, I had a happy birthday; yes, my past still rears its ugly head at times and overwhelms me with sadness.  I find a way to deal with it, to overcome; as the saying goes, "What doesn't kill you, makes you stronger" and I am living proof of this.  Next birthday you have, do not push yourself down by saying, "I'm old", lift yourself up and say, "I AM all that, and the whole potato chip factory too!"

Posted by Four Corners Foodie at 11:35 AM