In October, Roy and I celebrated 19 years of togetherness, and that anniversary day began in an interesting way.  In desperation, a coworker had texted him about not understanding some duties of the third shift.  After coming home, from helping his coworker, well the dogs had to make the huge announcement, and I was dragged, kicking and screaming, out of a lovely dream.  6am, on a Saturday morning, but it was our anniversary, and the Fates had a plan.

We suddenly began to reminisce about the third shift jobs we had back in Pennsylvania.  While we enjoyed working by ourselves, or we only another coworker present, it was a difficult life at times.  While the world outside was in full swing during the daylight hours, we were sleeping it all away.  Our next-door neighbor, retired, would wake us at 2pm daily, using a leaf blower to clean his driveway which was across from our bedroom. Oh yes, we spoke to him about it, but even though he, himself, had been a third shift worker, he was retired, and, “no one can tell me what to do anymore”.

There was one thing though, that made our lives a bit special, every Saturday morning, between the hours of 2am-4am, a meal at Jennie’s Diner.  It was located on Highway 30, open 24/7, considered a dive by tourists, but loved by all locals.  The waitresses were sassy, yet sweet; the food was comforting and better than any a five-star restaurant could serve.  Some dinner items were still available, and the breakfast menu was full of the most delicious choices and combos.  Lancaster County was still farming country, at that time, so a full, hearty, yet heart stopping meal, was still looked forward to.

Saturday mornings, at these ungodly hours, were the time for the third shifters, long haul truckers, and Friday night (oh, so drunk party goers) to get together.  Each booth had a small jukebox, songs were a quarter each, or 5 for a buck; and the Saturday morning crowd had favorites.  Everyone, and I mean even the police that came in for their meal breaks, sang along!  “She Thinks My Tractor’s Sexy” was a personal favorite, but when Neil Diamond’s “Sweet Caroline” came on, oh, the place erupted loudly in song.  It was not unusual to see someone get up, walk up and down the aisle, leading us like a symphony conductor.  Surprisingly, we were all in tune, and cheered when the song ended.  Talk about, “it was the best of times”! (Please, someone get the A Tale of Two Cities reference) 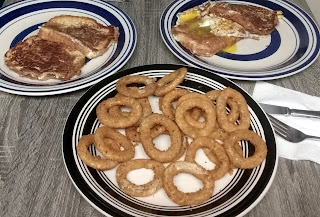 So, while reminiscing, Roy remembered that once, he had ordered French toast and onion rings; and a man sitting at another booth exclaimed, “Hey, just hearing that order is giving me a heart attack”.  Technically, it was our dinner time, but, again, only a few dinner items were available, the rest was from the breakfast menu.  Then it dawned on both of us, didn’t we have a bag of frozen onion rings in the freezer?  Oh yes, we did, and I had just purchased a loaf of Sara Lee’s Artesano Brioche bread, eggs and milk from the local market the day before.  It was our anniversary, and we were going to recreate that French toast and onion rings meal.  I guess this is where, those previous references to French toast, were all leading towards.

After cooking, eating and cleanup, and yes, we sang “Sweet Caroline” in tune, we both agreed that this was the start of the best anniversary day ever!  Later on, we took the drive up, the only paved road, up into the mountains, down Harts Draw Road, along Route 211.  Of course, many stops were made for photography, or to just take in the most beautiful scenery.  That night, pizza, chips and onion dip were enjoyed during our usual Saturday night anime marathon.  Yeppers, best anniversary day ever!

Being together, for 19 years now, we have realized that memories, making wonderful memories together, is what keeps our togetherness alive.  Of course, there have been bad times, no relationship is 100% perfect; well, maybe except for Barbie and Ken’s, but they’re an inanimate couple anyway.  We are grateful for each other; we cherish each day we were given, to be together; and now we wake up each day, and wonder what year number 20 will throw at us.

1 Tbsp. pure vanilla extract (not needed if brioche or challah bread is being used)

In a wide, one-inch deep, bowl, whisk together milk and eggs (and vanilla if needed).  Place two slices of bread into bowl.  At this time, place stove top griddle pan on medium-high heat; or turn on electric flat top griddle to 350F.

Flip over bread in bowl, sprinkle cinnamon on top; place bread on griddle, cinnamon side down, and sprinkle more cinnamon on top side.  Griddles are usually non-stick, but if not, melt two teaspoons of butter, and spread across griddle before placing bread on top.  Cook for 5 minutes, flip, and cook another 5 minutes.  While doing the 2nd-5 minutes, I usually place a half teaspoon, of butter, on top, and just let it melt into the browned side of the French toast.

Also, begin prepping the next two slices of bread; remove finished slices, add more butter to griddle, if needed, and begin cooking the new slices.  Repeat instructions for first two slices till done with all. Pour syrup over, and enjoy!

Makes 2 or 3 servings, depending on how many slices you consider a serving to be.