A Day of Infamous Remembrance.

According to an article, in Good Housekeeping magazine, there are 142 reasons, for celebration, in the month of December.  Instead of only the big three, Christmas, Hanukkah and

Kwanzaa, we have Boxing Day on the 26th, and my birthday as well; New Year’s Eve (31st), Yule/Winter Solstice (21st), Pearl Harbor Day (7th), International Animal Rights Day (10th), and a host of other religious, food related, and rather silly days in-between.

With so many “holidays” to celebrate, it would be only right to try and focus on, not the big three, but on some of the other interesting ones.  The first I have chosen is Pearl Harbor Day, observed annually in the United States on December 7, to remember, and honor, the 2,403 Americans who were killed in the Japanese surprise attack on Pearl Harbor.  The attack occurred on the island of Oahu, one of eight major islands of Hawaii, on December 7, 1941, leading to the United States declaring war on Japan the next day, and forced into entering World War II.

I was fortunate enough to visit Oahu twice, and made sure to put the Pearl Harbor Memorial tour on my visit list, both times.  This is a heart wrenching, heart breaking experience that left, not one person, without tears streaming down his or her face.  First, there is the movie, using historical footage, showing the bombing, the utter destruction of the Navy’s shipyard, and ships.  Then there is the boat ride out to the USS Arizona which is the eternal grave site of 1,102, of the 1,177 sailors and marines, killed during the attack on Pearl Harbor.  Standing at the railing, looking downward into the murky water, a sheen of oil can be seen as it continues to seep from the bowels of the ship.  One can only imagine what those valiant men experienced as the bombs exploded, the ship tore apart, and down into the water it sank; taking most of them with it.

Divers have attempted exploration of the ship, since the sinking, but it was not until submersible mini-subs, and ROVs, were able to go inside.  With modern technology, the interior was recorded, and everyday items like shaving kits, kitchen pots and pans, even uniforms hanging on clothes hooks, could be seen.

Has this information made you sad?  As I have grown older, I have seen the “holiday months” go from one of grateful, friendly and loving gathering to the point of “why bother?” to “it’s only about the monetary amount of the gifts that counts”.  So, here I am, to remind you, that these months were not always full of 100% joy and good cheer.  People suffered to make sure that freedom remained free, and we should be grateful to them for the joy and good cheer we obtained.

Here is a recipe I developed, December 9, 1995, two days after Pearl Harbor Day; those men must have been on my mind, even then. 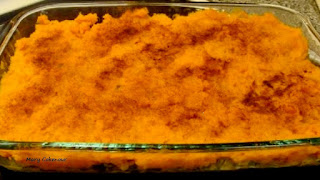 Peel and cut up sweet potatoes.  Cook in a small amount of boiling water, just enough to cover, for 20-25 minutes, or until tender; drain.  Mash potatoes; add milk, salt, ½ tsp cinnamon and nutmeg; set aside.

Preheat oven to 350F.  In a large skillet, cook lamb, mushrooms and onion together until there is no longer any pink to the lamb meat; drain excess fat.  Stir in wine and savory; cook for 1 additional minute and remove from heat.

Spray a 2-quart casserole dish with nonstick spray.  Spread 2/3 of the mashed sweet potatoes over the bottom and up the sides of the dish.  Fill center with lamb mixture; top with remaining 1/3 of potatoes, spreading evenly over filling and to edges of dish.  Bake for 20 minutes; sprinkle orange peel and remaining ½ tsp cinnamon over top; bake an additional 15 minutes.