My first introduction to Country Fried Steak, also called Chicken Fried Steak, was back in the 1980's.  A new restaurant had opened up in Farmingdale, New York which served "Southern" food; after all these years, I don't remember the name of it.  It was a thin piece of steak which had been beaten into tenderized submission; deep fried with a bread coating, served with a white gravy, mashed potatoes and corn.  Personally, I thought the white gravy was pretty bland, so when I started to experiment with making this dish on my own, you know I was intent on jazzing it up. 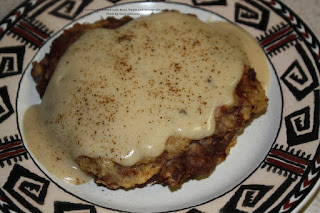 Now when I first visited Utah in 2006, that's when I learned about black pepper gravy; still the white gravy, but packed with pieces of cracked, black peppercorns.  This was considered the traditional Southwestern version of Country Fried Steak. My hubby Roy loved it this way which was understandable, since he grew up in the Southwest, but I wasn't too much of a fan of all those peppercorns. 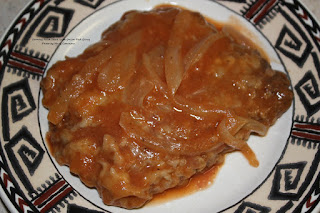 Then there was another way I learned watching one of Paula Deen's many shows on Food Network; prepare the meat the same way, but finish cooking it off in a rich, brown gravy packed with onions.  I love variety in preparing food, so knowing there were different types of Country Fried Steak was a boon for me.  Oh, the term "Chicken Fried Steak" just refers to the method of cooking the thin steak the same way you would a chicken cutlet. 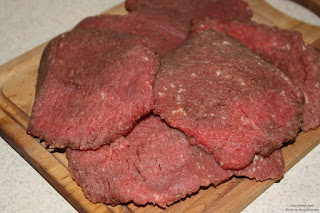 Now what exactly is "cubed" steak? The term "cubed" refers to the indentations left in the meat after the tenderizing process. Originally the meat used was top sirloin and served in finer restaurants; however, the need to tenderize cheaper cuts of meat made the term "cubed" more generalized. Nowadays you'll find cubed steak in the local supermarket and it can be made from chuck, round or flank steaks. The steaks are cut thin, about a half inch, then pounded out to a quarter of an inch thickness. 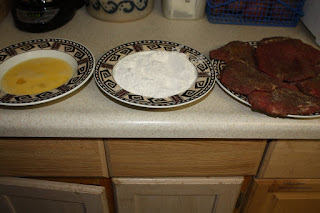 There is a variety of ways to prep the cubed steaks for frying: flour, dried bread crumbs, egg wash, milk wash, seasoning the meat, seasoning the flour or bread crumbs. It is up to the cook how to prepare the dish overall, whether their own methods or following the old family recipe. For me, it depends on my mood; what you see in the side photo is the cubed steaks preseasoned on both sides(one tablespoon each of salt, ground black pepper and garlic powder, plus a half teaspoon of cayenne powder). I lightly coat with flour, dip in an eggwash and then coat with the flour once again. If I use dried bread crumbs, I will use preseasoned as it doesn't lose its flavoring during the frying process like seasoned flour typically does.  My described flour method ensures that the seasoning stays on the meat rather than be leeched out into the oil during frying. 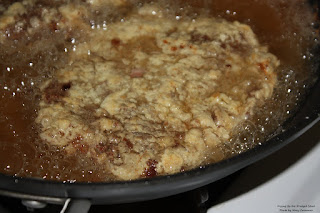 I love using peanut oil for frying. Yes, it tends to be more expensive than canola, vegetable or corn oils, but whatever is fried in it is extremely less greasy and the taste is clean; you taste the food, not the oil. I use a deep 12 inch skillet for frying, fill it about 1 and 1/2 inches with oil and use medium-high heat. You'll know the oil is ready when you drip a couple of drops of cold water into the oil; it will sizzle. If it's popping and splattering already, you let it heat up too long, so turn down the heat to medium and let it come down to the sizzle stage. Turn the heat back up to medium-high and put your first two steaks in. The dredged cube steaks will be large, so only frying two at a time will prevent crowding, and allow even browning.  If you let the oil remain at that "too hot" stage, the meat would have browned very quickly, but be still raw inside. Once browned, remove the steaks to a plate covered with paper towels to let them drain any excess oil.

Lets talk gravy. Now while the typical gravy you might see in restaurants or even make yourself is the white gravy, or the pepper gravy; I jazz it up with some browned, ground sausage. A mildly seasoned, loose breakfast sausage works great.

The next gravy I call "Onion Red Gravy"; I use regular white or yellow onions, but instead of a brown only gravy, I make it sing with a little tomato sauce. 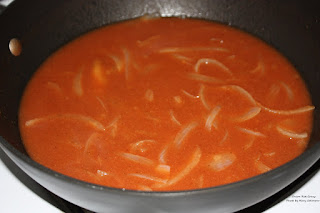 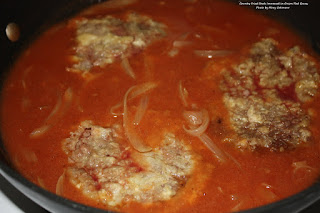 In a deep, 12 inch skillet, heat the oil on medium-high and saute' the onions until they just begin to soften.  Stir in the flour thoroughly before adding the tomato sauce, beef broth, black pepper and garlic.  Bring to a boil and immerse the steaks into the liquid.  Turn the heat down to low, cover and let simmer for 30 minutes before serving.

So there you have it, Country Fried Steaks and two very different gravies to serve them with.  Enjoy!