One-Two-Three-Four and Time for Coffee Too.

One new recipe.
Two families to cook for.
Three complete meals for a week.
Four hours to prep, prepare and clean up.

No, this is not a new nursery rhyme geared towards the kitchen, and it doesn't rhyme in the least anyway.  This was my accomplishment for this morning; can't decide if I'm leaning towards Super Woman status, or Totally Hot Culinary Goddess.  Besides providing meals for myself and my hubby, I also send meals down to my mother-in-law and her other son who live down in Moab...but I'm getting ahead of myself on the 1-2-3-4 scale.

Cut the potatoes in half lengthwise, angle the knife to cut the first wedge; turn the potato half cut side down and repeat wedge cut with knife; repeat.  Depending on the size of the potatoes, there will be 3-5 wedges with each potato half; place in large bowl.  Add the parsley, salt, black pepper and cheese; toss to coat.  Add the olive oil and toss again making sure to mix in any ingredients that may have settled to the bottom of the bowl.

Note:  the olive oil was added last to give the other ingredients a chance to better coat all the potato wedges, not just the top layer which the oil would cover first and make everything stick to it.

Two Families to Cook for.

As I mentioned earlier, I cook for my husband's family also, so hence the two families.  My mother-in-law enjoys the meals I send down to her, and I enjoy doing it.  Simple as that...and yes, I have a mother-in-law that not only enjoys my cooking, but appreciates it and me as well.  Eat your heart out!

Oh, and don't let the upcoming photos fool you.  There are two trays of each complete meal.

Three Complete Meals for a Week. 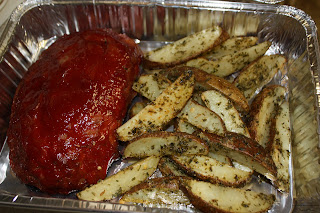 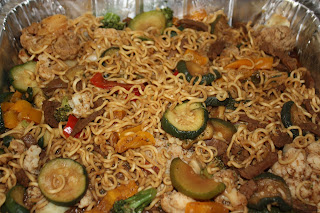 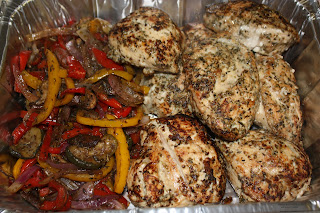 Four Hours to Prep, Prepare and Clean Up.
First off, I made sure to get a pot of coffee going; I love my coffee in the morning!
After getting the chicken and marinade in a bag and settled into the refrigerator, I began making the stir fry.  What made my time go faster is that I often buy extra vegetables that I use a lot of: bell peppers, onions, zucchini, yellow squash, broccoli and cauliflower.  I cut them to the sizes I need, blanch or steam if necessary and portion them out into sealable plastic freezer bags.  When I need them, there they are ready for the using.  The thin round steak was defrosting overnight in the refrigerator, but still slightly frozen when I pulled it out.  This made it so easy to cut thin strips which I mixed with a cup of Hoisin sauce; then I just followed the instructions as listed on my recipe (click  the link over the photo).  While everything was cooking, I had time in between to clean up and start the next meal which was the meatloaf.
Again, simply follow the recipe (click the link over the photo); 45 minutes after placing the meatloaves into the oven, I added the tray of potatoes and they finished up at the same time.  I cleaned up and sauteed the vegetables that would go with the chicken.  Fifteen minutes before the meatloaf and potatoes were finished, I began the initial cooking of my chicken which had marinated for the maximum time of four hours.  The chicken was on the baking tray and ready to finish up in the oven as the other items came out.
Basically, I began all this at 8am and was completely finished up, including cleanup and packaging up the meals, by 12pm...four hours!
During all this, I sipped on Vanilla Nut Creme coffee; dodged cats and dogs milling around my legs, hoping I would drop pieces of chicken or beef; and actually downed a muffin for breakfast.  So, I have decided that not only am I a Super Woman, but definitely a Goddess also.  I'm now going to take a well deserved nap; have a great day everyone!
Mary Cokenour
﻿

Posted by Mary Cokenour at 1:33 PM