Hunan in Cortez is Worth the Try. 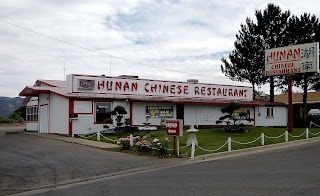 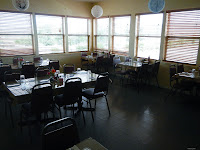 Having been told about Hunan and the buffet by friends, we decided to try it out; unfortunately what we did not know is that the buffet is only served at lunch time.  Arriving around 5pm, we found ourselves to be the only diners in the restaurant; the staff were seated at a back booth talking, but seated us as soon as we got their attention.  After that, service was very attentive; making sure our water glasses were filled and that we were happy with the dishes we had ordered. 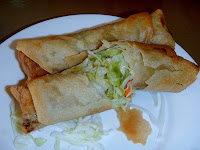 We ordered two appetizers, Egg Rolls and Dumplings (choice of fried or steamed); these are made fresh every morning in house. The wrappers on the egg rolls was lightly fried and crispy; it was loaded with shredded cabbage, so much so, that it was difficult to bite apart, so it all came out of the wrapper in a chunk. I used a fork to break it into smaller pieces to dip in my mixture of sweet/sour sauce and hot mustard. The dumplings were not pan fried like other Chinese restaurants usually do; they were deep fried which made the wrappers hard and too crunchy.

Before the appetizers were served, we were given a bowl of Egg Drop Soup; it was amazingly delicious.  Thicker than usual, with little bits of carrot and so satisfying.  Next time we go back, I'll fore go the appetizers and just enjoy the soup.

We also ordered two main dishes; Combination Rice Noodles and Happy Family.  The Combination Rice Noodles did not have any sauce on it which allowed the freshness of the noodles, vegetables, pork, beef, shrimp and chicken to sing out loud.  A slight sprinkling of soy sauce enhanced this dish more; but it was delicious with or without the sauce.  If you think about comfort food, this is it Chinese style.

Happy Family made us both very happy indeed; the brown sauce was out of this world in flavor; the vegetables were crisp; the BBQ pork slices, beef, chicken and shrimp were all cooked perfectly.  This is one of those dishes that, no matter how full you feel, you still want to keep on eating it.  It was served with white rice which we used to make sure we sopped up every bit of sauce.


Overall, the appetizers were a fail, but the soup and main dishes made up for it in spades.  In the mood for Chinese food and in the Cortez, Colorado area; Hunan Chinese Restaurant is a must try.