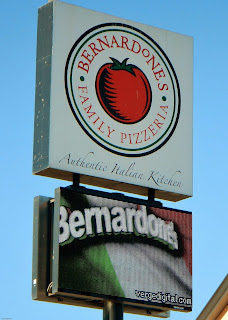 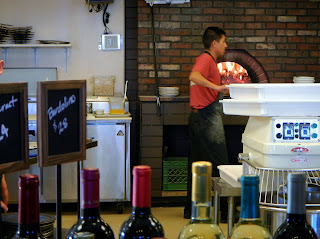 Now being a former New Yorker who has grown up on Italian food, a good amount of it pizza, I was excited about trying out the cuisine at Bernardone's.  While I do judge pizza by New York standards, the use of a wood burning brick oven is pretty impressive; and it does a nice job on the dough. 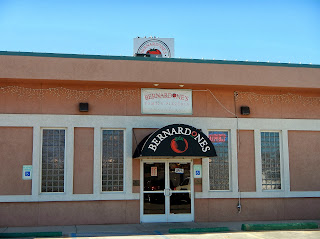 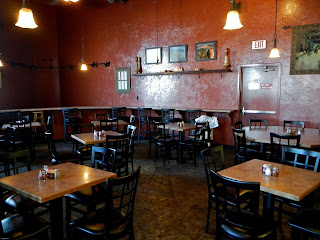 Bernardone's has a sort of fancy look on the outside, but the interior is rustic with booths lining most of the walls while tables and chairs take up the central space.  There is a menu over the ordering area, but it does not have the entire menu listed, so go by the paper version.  Basically you order at the counter, pay and then a waitress will bring your drinks, appetizers and main dishes later on. The staff are friendly and will explain menu items; you will get things your way and with a smile. 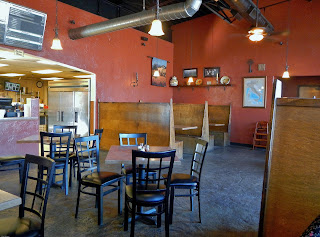 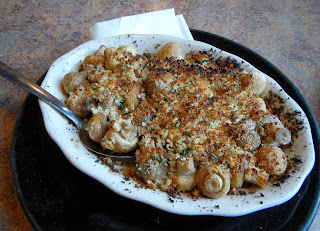 To start off the dining experience, we chose the Baked Mushrooms alla Toscana; button mushrooms coated in olive oil, fresh bread crumbs, herbs and garlic.  It came to the table just as described on the menu, "piping hot from the oven".  The bread crumbs were crispy and flavorful;  the mushrooms were not soaking in olive oil, but had a mild flavor of it which was a nice touch.

There were four of us present, and since it was lunch time, kept the dishes simple; two pizzas, a calzone and a pasta (from the gluten free section).  Yes, I said "gluten free"; Bernardone's created this section of the menu to let diners indulge in pasta, but not suffer for it later on. 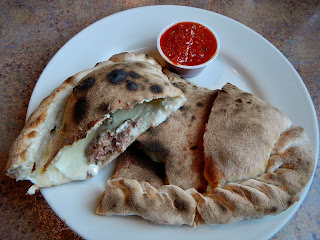 The Cheese Calzone contains Ricotta, Romano and Mozzarella cheeses; I did a little "create my own" by having meatballs added in.  I notice that calzones made out in the Southwest are definitely not like New York calzones.  I'm used to them being so stuffed with cheese, they're ready to explode; while the ones out here have thin layers of cheese in an airy pocket of dough.  Don't get me wrong, this calzone was delicious; but I missed all that cheese.  The marinara sauce served on the side was also delicious and I enjoyed the chunks of tomato it contained.  Being baked in the wood burning oven also gave the calzone a unique flavor overall. 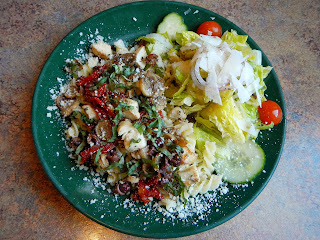 Fusilli Campagnola was the gluten free pasta dish ordered; pasta sautéed with garlic, chicken, sun-dried tomatoes, calamata olives and mushrooms; topped with fresh basil and Romano cheese.  The portions at Bernardone's are generous and the diner who ate this dish merely stated that it was good.  It surely must have been because she basically left her plate clean...no leftovers!

First pizza ordered was the "Pizza Ultimo" 10 inch Personal size; pepperoni, Italian sausage, green bell peppers, red onions, black olives and mushrooms.  Second pizza was a "Create Your Own" 10 inch Personal size consisting of ground beef, green chiles, white onions, feta cheese and fresh basil.  Once again the wood burning oven gave the dough a crispy crust and unique flavor; overall the pizzas were delicious and certainly should be tried when you visit Bernardone's.  Did they live up to the standard of a New York pizza?  Of course not, this pizza was made in New Mexico, not New York; but I still would order one and enjoy it at Bernardone's.


When looking for an Italian eatery in Farmington, New Mexico, I would definitely recommend Bernardone's Family Pizzeria over some chain restaurant that imitates Italian cuisine.  Bernardone's makes their food the true Italian way...with love.