In 2013, Palermo Villa, Inc., put out in the test market a new crafted pizza line, Screamin' Sicilian, claiming this was "pizza with attitude". With querky names, like Bessie's Revenge, Boss Hog, Spicy Clucker, and boxes that were meant to "blow your mind", the product is still on the market two years later.  Now remember folks, I'm a New Yorker with loads of experience with Italian cuisine, and especially New York style pizza.  In other words, this pizza might be what folks in Wisconsin like, but New Yorkers...yeah, no. 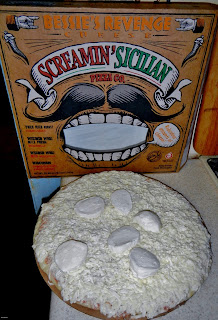 So it came to past that I noticed the pizza box at my local Walmart (good job on that aspect of marketing); a new frozen pizza better than any other out there.  Well I decided to take that challenge, so picked up a Bessie's Revenge which touted, "Thick Robust Sauce" and Wisconsin made cheeses of mozzarella, parmesan, romano and white cheddar.  Since it was frozen, I could not spread the whole mozzarella out, so baked it at the required 425F, checking on it at 13 minutes as instructed.  The artisan crust was browning, the whole mozzarella was still whole; so another 3 minutes went by.  The crust was very brown by then, whole mozzarella still whole, and the other cheeses did not look very melted.  Two more minutes, and out of the oven it came as I didn't want a burnt crust. 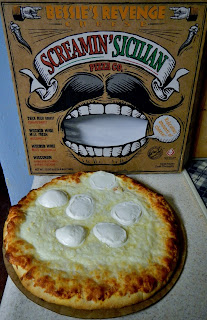 After dividing it up into slices, the first taste was, "Meh".  Cheesy, but not an overwhelming "Wow" from the supposedly robust sauce.  The whole mozzarella was difficult to bite through, extremely chewy, and the center was cool.  The artisan crust was flavorful with herbs and garlic, crunchy; basically the best part of the pizza.

Two of us did this taste test, and we both agreed on the evaluation of the product. Maybe the cows in Wisconsin have attitude, but they weren't putting it forward with this pizza.  Of course the manufacturer will probably claim that we "didn't prepare it correctly", or "don't have a good sense of great pizza"; yeah, I've gotten those excuses before.  However, it is what it is; the taste buds of two individuals were not impressed.

Anyway, you might find it in your local supermarket, so try it out for yourselves; you might agree with this review, you might not.  To each his/her own.