Cold Enough for Soup, but Not Snow.

For San Juan and Grand Counties, snowpack on the Abajo and La Sal Mountains is extremely important during the winter months.  There is much concern that the 2017-2018 season is seeing abnormally dry conditions; drought is a high probability at this point in time.  At the same time, the temperatures are not being helpful, being just above or below the optimum point of producing snowfall.

At the same time, illnesses such as pneumonia and influenza are rearing their angry heads. Roy almost lost his own mother recently when she was hit by a double whammy, both illnesses at the same time!  Thankfully she was taken to the hospital in time and is making a full recovery, but it was touch and go for over a week.

Ending and beginning the years with news items that are detrimental to our communities is not pleasant, but this is where strength of spirit comes in.  It’s a pulling together of all residents to take care of, not just immediate family, but friends, neighbors and, yes, even strangers just moving into the area.  It’s a testament to the pioneer character; stand strong together in the face of adversity.  So, to create a self-fulfilling prophecy, focus on the positive and watch the miracles appear!

…and on that note, let’s talk soup and the comfort it can bring.  Oh come now, I don’t know of anyone who, no matter how down he/she may feel, doesn’t get a soothing smile on the face after diving (not literally please) into a bowl of soup.  Every family has their own special recipe, a soup they swear by as the perfect fix for “whatever ails you”.  That soup for the Cokenour clan is Potato Leek, a creamy concoction of leeks and potatoes pureed into luscious goodness.  While we enjoy the version that has butter and cream added for a rich, silky texture; it can be made without these two decadent ingredients.  Great news for those who do not do well with dairy products, but still want that creamy comfort.

While leeks are primarily used in soups, this relative to the onion, and asparagus, is more versatile than one might think. Due to its mild onion flavor, a leek can be substituted for a regular onion; cutting it will not irritate the eyes either.  Leeks have a small bulb end; and the tastiest part is the white part which grows deep in the ground, and away from the sun's rays. The green upper part is very fibrous, and used for making stock; or thrown into the compost pile. Growing in the ground has the disadvantage of having dirt caked in between the many layers of the leek, so it needs to be thoroughly washed before use. The best way to do this is to cut the white part either into circular sections, or cutting it up into pieces, placing it all in a colander and washing under cool water.  The pieces can then be used in soups, quiches, casseroles, side dishes; anything an onion can be used for, but without the tears!  Sautéed in butter or olive oil, they turn translucent and release a pleasant onion scent that is easy on the nose, and most especially, the eyes. 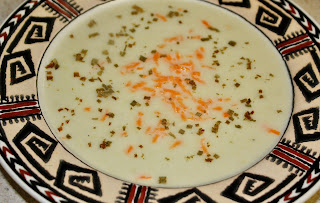 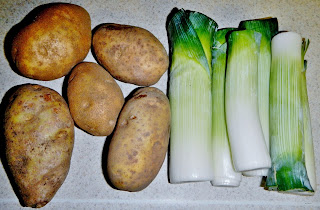 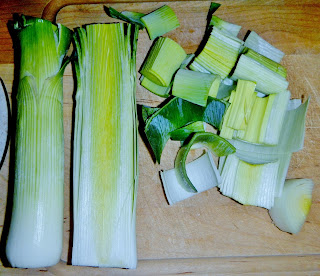 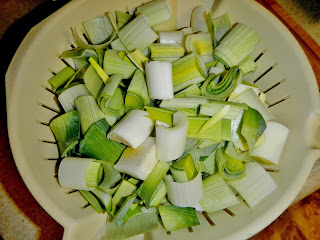 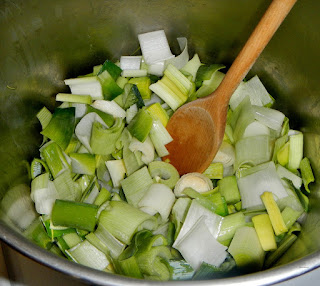 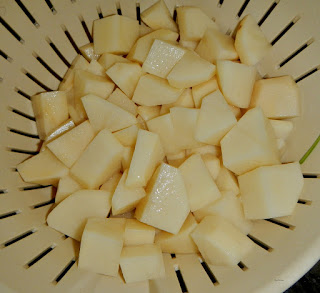 Cover pot and let soup simmer for 20-30 minutes, or until potatoes are tender.  If using a hand-held blender, puree the soup in the pot until smooth.  Otherwise, transfer the mixture, in batches, to a standard blender; puree until smooth.  Return soup to the pot. 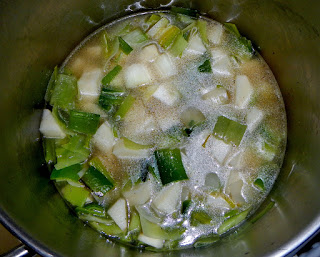 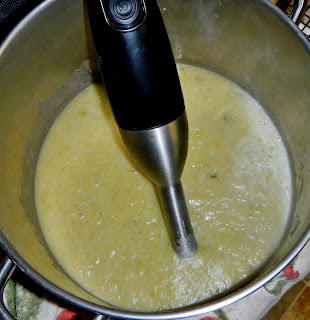 On low heat, stir the cream into the soup mixture.  Let the soup come up to a hot temperature, but do NOT bring to a boil.  Ladle into bowls and garnish with favorite herb (thyme, parsley, chives, etc.) if desired.

As promised, here is a recipe for Potato Leek Soup, but dairy free.  I got this Weight Watchers recipe from my niece, Donna, who is a RN and resides on Long Island in New York State.  After printing out a copy of the Weight Watchers recipe, I compared it to my Potato Leek Soup recipe; pretty similar in nature. I cooked up a pot of this recipe, but added crushed, dried thyme instead of using the chives as they suggested. Wow, was pretty amazed at how good it came out; not as creamy, but it was still thick and rich tasting; the thyme added a pleasant savory flavor. Serving it to my hubby, he too was amazed at how good this non-dairy version was; he equated the texture to cream of wheat, but still enjoyed it...two bowls worth in one sitting.  Donna suggested that I mix in a little low fat or fat free sour cream if we missed the dairy; tried it and didn't care for it at all.

To clean the leeks, slice them lengthwise and then cut into one inch pieces. Put the pieces into a large colander, rinse with cold water until you can no longer see any dirt; separate the pieces as you rinse them.  Let them stand a few minutes to allow excess water to drain out.

Try out both recipes and see which you enjoy the best, but most of all, have a positive and happy new year!