Gluten Free, or Just Another Fad?

I have to admit, when the huge out-cry about gluten began, I was clueless on what the fuss was about.  First off, what the heck is gluten and why is it bad for the human body?  Gluten is, to put it into layman’s terms, glue; a mixture of two proteins, found mainly in wheat, rye, spelt and barley.  When water is added, the gluten helps the grain form a sticky consistency and gives dough elasticity.  I like bread, I bake breads, so that’s good, right?

No, not so good for those who have Celiac disease, gluten sensitivity or wheat allergy; and the main culprits are those two proteins, glutenin and gliadin.  Celiac disease is an autoimmune disease; the gluten is an invader that must be destroyed, but the immune system also targets the lining of the stomach.  Symptoms of this disease are almost the same for those with gluten sensitivity and IBS, so a blood test will be a necessary test; if inconclusive, a biopsy of the stomach lining may be necessary as well.  The most common symptoms of Celiac disease are digestive discomfort, tissue damage in the small intestines, bloating, diarrhea, constipation, headache, tiredness, skin rashes, depression, weight loss and foul-smelling feces. More bad news though, some people don’t show the digestive symptoms, but only show typical signs of anemia; a blood test will hopefully give the truth of it all.

With the huge out-cry came more labeling on all food packaging and cookbooks galore from cooks, chefs, bakers the world over.  With it also came the celebrity push, you know how it goes.  A stream of celebrities suddenly decide to go gluten free; Zooey Deschanel, Miley Cyrus and Katy Perry are allergic; Elisabeth Hasselbeck and Keith Olbermann have Celiac disease.  Others, however, are on the train of, “It just makes me feel healthier, that’s all.” and when a celebrity says that, suddenly their fans have to jump on that train.  Will going gluten free make anyone healthier?  Sure it will, breads and grains are known for putting on weight, and being carb central, are extremely bad for those who are diabetic.

So, it’s no wonder I decided to play with a gluten free recipe for chocolate cookies.  I have to say I take a little exception at the name of the cookies, “Chewy Chocolate-Coconut Cookies”.  Yes, they’re full of chocolate, but coconut?  The gluten free flour used is coconut flour, but I wouldn’t put it in the name of the recipe.  That’s like baking up cookies using regular white flour and putting that fact into the recipe name.  I followed the recipe as written, but then went two steps better; switching out regular sugar with coconut sugar, then also rolling the cookie dough into flaked coconut.  Now that’s what I call chocolate-coconut!

First I’ll give the recipe as is, then list the changes I made for the other two batches I made.  The recipe came from Savory Magazine (page 75 - January 2018), put out by Giant Food Stores.  I gave samples to my coworkers at Canyon Country Discovery Center, located at the northern end of Monticello, Utah.  I got a rousing approval from all who tried the three types I baked up.  Even my hubby enjoyed them, and this from a man who keeps telling me he doesn’t like chocolate! 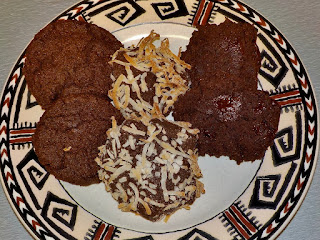 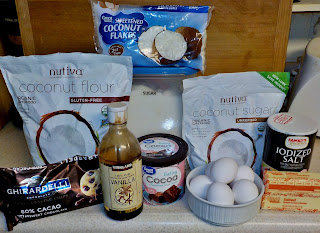 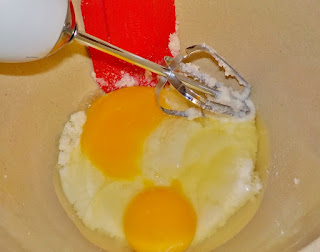 Step 2 – In the bowl of a stand mixer or with a hand mixer, beat the butter, sugar and salt until creamy.  Beat in the eggs, one at a time. Add the cocoa powder and vanilla, mix until smooth.  Add the coconut flour and mix until combined (if batter seems runny, add 1 more Tbsp. coconut flour).  Fold in the chocolate chips. 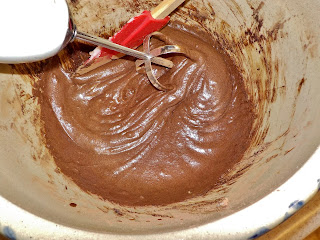 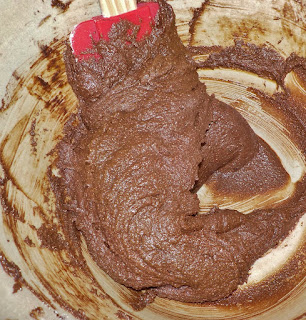 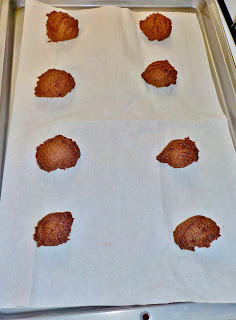 Step 3 – Using a tablespoon or mini cookie scoop, drop the dough onto a parchment-lined baking sheet.  Gently press the cookies to flatten slightly. 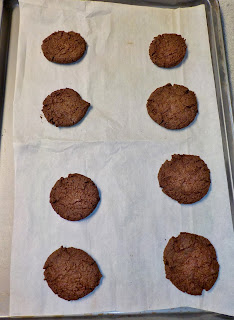 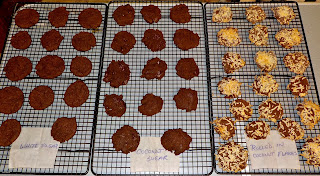 Living at a high altitude, adding the extra tablespoon of coconut flour was necessary.
I let the cookies cool slightly on the baking sheets, but then removed them to baking racks.

Second batch of dough; switch out regular white sugar with same amount of coconut sugar.  Coconut sugar looks similar to brown sugar, but has a lower glycemic index than white or brown sugar. 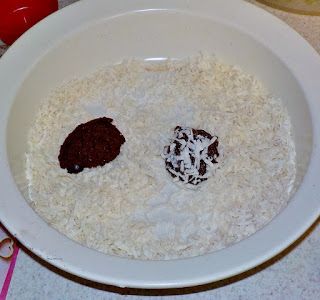 Third batch of dough; again, use coconut sugar, but roll each tablespoon of dough in coconut flakes.