This little story came about due to the posing of a single jackrabbit.  Normally they’re zipping back and forth across roadways, or racing through the desert trying not to smash into sage brush.  Photographing them is next to impossible, those buggers don’t sit still long enough, until that one day.  Sitting at the front desk of Canyon Country Discovery Center, well I have the best seat in the house.  Large window panes allow me to look across farmland and canyon rocks stretching eastward to Colorado; in the far distance are the majestic San Juans.  Typical wildlife that entertains are mule deer, wild turkeys, red fox, antics of chipmunks, aerodynamics of hummingbirds and the zipping of jackrabbits.  Then it happened, a jackrabbit stopped on a gravel path and began to “strike the pose…vogue” (Madonna song reference).  He (assuming it was a he, I didn’t actually check) sat back on those long, power punching legs; turned his head this way and that; then turned his whole body so that the mild wind pushed his ears back.  His eyes slowly closed and I swear that little bugger had decided to take a nap there and then.

So, back to the mention of a little story and let me put the disclaimer now, so those experts on wildlife won’t get all bent out of shape.   The story I’m about to tell about this jackrabbit is totally made up, a work of fiction from my mind; call me crazy and I’ll say thank you for noticing. 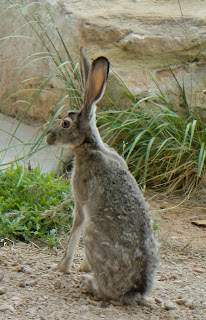 Meet Jack, Jack the Rabbit; he’s not much on commitment; loves the ladies, but doesn’t stick around long enough for a lasting relationship.  He’s a bit of a cad, loves them and leaves them in a “delicate” condition.  Now the ladies, they have their own issues; so busy running to no place in particular that when the babe comes, it’s “pop it out, it fends for itself”.  Jackrabbits don’t build nests in the ground like the cute cottontails; nope, their babies are born wide eyed, bushy tailed and raring to go-go-go.  Jack has a sister, Jackie; who happened to meet one handsome hare from Wyoming.  The Wyoming Alope family are well known in those parts for slick dealing at the gambling table and serving up watered down liquor at their establishment.  Yes sir, Jackie married and became…Jackie ALope.

Then there is Jack’s uncle, Bob; the family don’t speak much about Bob, not since “the incident”.  Seems Bob got into a bit of a mess when he was hungry and decided that elderberries would make a great snack.  Well he was a bit lazy that day too, so instead of picking those berries fresh off the bush, he ate the ones sitting on the ground, not realizing they had fermented into wine.  That Cat was so drunk, didn’t realize that his neighbor’s third daughter was sleeping under that elderberry bush.  Nope, he had his way with her, No, not that way, get your minds out of the gutter; he done ‘et her!  Yep, Bob’s his uncle, but they don’t really talk about Bob in front of pleasant company.

Ah cooking, this column is supposed to focus on cooking, so let’s cook up some rabbit, aye?  In Native American cultures, the rabbit resides in legends from being a good luck charm to a parallel of coyote; the protector of witches and a trickster.  Mesoamerican belief was that a rabbit, not a man, resided in the moon.  No matter the legend, the rabbit was prized for its meat; its fur and tanned hide made into gloves, caps, cradle board cushions or padding.

In the cookbook, Pueblo Indian Cookbook by Phyllis Hughes, there is a kitchen tested recipe for Jackrabbit Stew.  While researching recipes for this article, I found that Native American cooking techniques/beliefs resembled ones I am quite acquainted with. Before serving the meal, a small portion is offered up to the spirits; similar to the offering of a piece of bread and meat to the Greek Goddess, Hestia (protector of the home and hearth; goddess of hospitality).  When it comes to measuring, it comes down to the senses; the feel of the grains, herbs and spices, a sort of knowing, in your heart, what amounts are correct.  That’s what cooking with love and passion are!

So here’s the recipe, and if rabbit or hare are not your type of fare; substituting chicken will be just as tasty.

Cut rabbit (or other) into serving size pieces.  Dredge in flour.  Put oil in large kettle and heat until sizzling.  Brown all pieces of meat on all sides, drain and pour off excess oil.  Return meat to kettle, add water and simmer for two hours, add all vegetables and simmer until carrots are tender.

Note:  Not sure if the repeat of onion and salt are intentional or a misprint.  The majority of cookbooks also have ingredients listed in the order that they are used, while this recipe is a bit of a hodge podge.

Posted by Mary Cokenour at 7:30 AM