Food dehydration has been a part of culinary history as far back as 12, 000 BCE.  The Egyptians used desert heat and blazing sun to suck the liquids out of fish and poultry.  The Middle Ages saw the development of “stillhouses”.  Fruits, vegetables, herbs, even meats were strung up along the ceiling, fires lit, so that the heat would dry them out.  Sounds like the invention of smoking foods can be attributed to that practice as well.  World War 2 necessitated lightweight foods that could be carried in a soldier’s pack; dehydration was the answer.  However, when the soldiers, who luckily survived “The Great One”, came home, families were not having anything to do with that “stuff”. 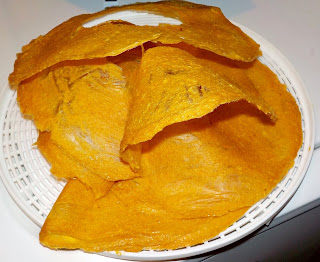 By the 1960s and 70s though, outdoor lifestyles surged forth; sex, drugs and rock n’ roll were the rage for young folks.  However, they had to eat too, and dehydration made a comeback with jerky, trail mix and healthy, organic, dried fruits.  Hiking and camping went hand in hand with this new lifestyle as well, so back to lightweight foods in backpacks. 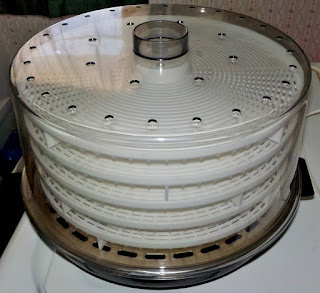 While many food items can be air dried by hanging on strings (herbs, mushrooms, small peppers), you definitely would not try this with liquid rich foods.  Slicing up steak, to make jerky, would only encourage bacteria and insects when hung up to dry.   The invention of the electric dehydrator was a boon to this new type of homemade product making.  The use of low heat temperatures, dry air movement and time guaranteed a tasty food that, if stored properly, would last and last.  Now we have solar dehydrators which, like the Egyptians, use the power of the sun to heat and air dry.  No worries over air borne bacteria or insects as the solar units are enclosed, using mirrors to reflect onto the food.

This year, due to all the winter and spring moisture, the fruit trees are packed with a rich abundance of fruits.  There is canning and freezing to store, but then dad mentioned dehydration; how he loved to snack on dried apricots.  We picked several from his over laden trees; put into a water bath to easily remove the skins.  Then I pulled out the old dehydrator; mine is a Waring from 1990 with no temperature setting (standard 140 F).  It still works well for what I need it to do, so I will buy a fancier, temperature control model once it gives out.  Just because something is old, does not mean it cannot be useful anymore.

There are drawbacks to dehydration; along with the moisture, some nutrients are lost in the process.  The natural sugar content is dense and compressed, so if watching those carbs, this snack could be a no-no.  The end products can be extremely chewy and/or tough; and not always re-hydratable.  Depending on the fruit, vegetable or meat, the time to dry it out can be long hours leading to days.  For example, with my dehydrator, dried apricots can take up to 36 hours to completely dry out; that is a lot of electricity being used up!

What could I make that would take less time, yet be still be a good snacking item; fruit leather, also known as fruit roll-ups or fruit strips, can be done between 6 to 12 hours.  The time difference is dependent on how many trays being used, and how thin or thick the pureed fruit is. 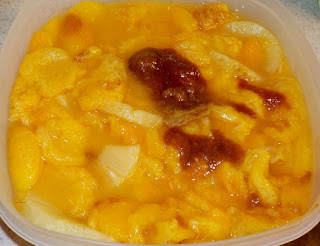 Here is what I did: 80 apricots split and pits removed, put into a hot water bath to make skin removable easier (some folks leave the skin, it is a matter of taste and texture).  To keep the apricots from turning brown, I added two cups of fresh pineapple (yes, lemon juice (1/4 cup) could have been used instead).  For added sweetness, four tablespoons of raw honey; then pureed all (immersion blender, blender or food processor will work) until smooth. 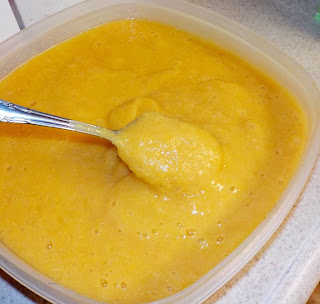 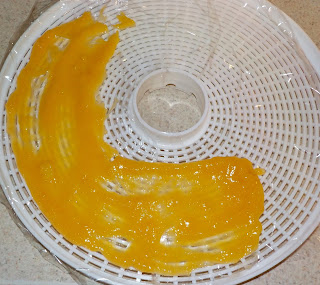 Each tray of the dehydrator was lined with plastic and the puree was smoothed on thinly, but not leaving any non-opaque sections.  A half inch of empty space was left from the center opening to the puree, and the outer tray edge as well.  Plugging in the dehydrator, it immediately began to work; the scent of apricots filled the air.  Every two hours I turned off the dehydrator to check the texture.  Hour 10 was at an almost point, so checking at hour 11 I found the fruit leather to be completely done.  It peeled easily off the plastic, fit into a plastic bag which was sealed (squeeze the air out) and then sealed inside a plastic container.  The puree I had made was in a 3-quart container, and I was able to make 2 batches of fruit leather, using the 5 trays each time. 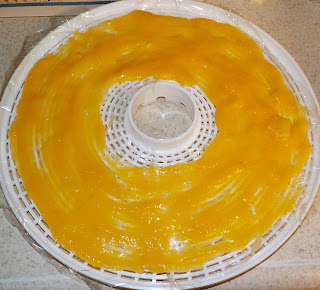 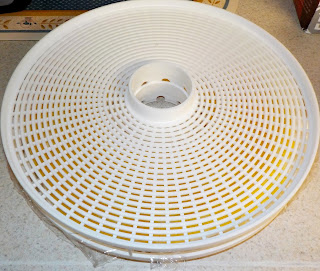 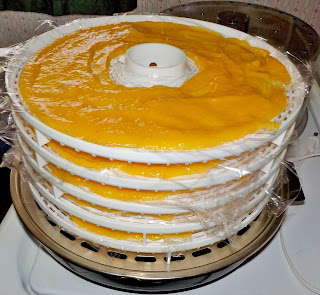 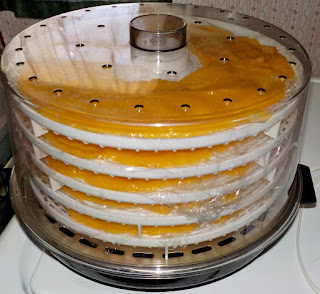 When sealed and stored properly, this all natural, only three ingredient fruit leather can last up to one year; except in the Cokenour household.  Looks like I will be making more in the near future.