Hours of Operation:  11am – 9pm; Monday thru Sunday


Late one June afternoon, a gentleman from Moab, named Sam, made my acquaintance.  He asked me about living in Monticello, the types of businesses in town, but more importantly, what kind of restaurants.  Then he asked me, “What kind of restaurant would you like to see in Monticello?”  I told him point blank that we needed Asian Cuisine – Chinese, Japanese, Thai; heck, all three!  I made up a packet of information for him; map of the town indicating where all businesses, gov’t offices, schools, churches, etc. were located; local phone book; San Juan County guide book; and, of course, 101 Things to Do in San Juan County.  Politely he thanked me for all my help, and that I had given him much to consider and think about. 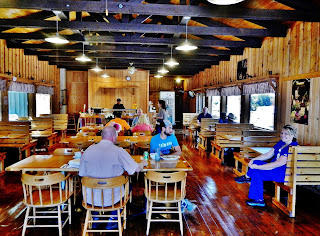 So it came to pass, on Thursday, September 5, 2019, Sampas Janhom, or Sam, had the grand opening for Ja-Roen Thai Sushi.  Located at the old Horsehead Grill, or many remember it as the old MD Ranch House, the southwestern atmosphere was kept intact to match the aesthetics of Monticello.   Inside was abuzz with many a local savoring the Asian specialties, laughing, conversing and having an overall good time.  It was not unusual to hear, “We have been so looking forward this”, “This is so exciting!”, and “We love sushi, and don’t have to go all the way to Cortez or Moab any longer”.  I told several the story of how Sam and I had met, and one response was, “Well Monticello needs to thank you!”, and you are quite welcome Monticello!

Sam is quite an interesting man, born and raised in Thailand, he worked for the U.S. Embassy there in the Immigrant Visa Department.  He was in charge of documenting and approving all Indochina refugees wishing to travel to the United States.  After immigrating to the United States himself, Sam found employment at Miami International Airport as a driver.  Not being fond of American sandwiches, he began cooking meals for himself and this attracted the salivary glands of fellow coworkers.  He began cooking for them as well, and before he knew it, Sam was working his way through restaurants.  Starting at the bottom, he worked up the culinary ladder until reaching status of chef.  Upon moving to Moab, he and his wife, Kloichai Kracha, worked as a chef team at Singha Thai.  He began a great friendship with Kent Somerville, and they became golfing buddies as well.  It was no wonder then, when Sam told Kent about his dream of becoming a restaurant owner that Kent decided to help fulfill this dream.

Manning the knife and bamboo rolling mat is Sushi Master, Sornsawan Chaichan, nicknamed Aussie.  He has been creating masterpieces of Sushi, Sushi rolls and Sashimi for 15 years.  A simple Shrimp Tempura Roll winds its way upon the plate, dragon head in the lead.  Insane Eel Roll resembles pool balls ready for play, and no one will mind pocketing the 8 ball into the mouth.

Our lovely waitress, Shaile Beh, juggled table service, and a continuous ringing in of phone orders.  She is knowledgeable on the menu items, sweet in personality and willing to make sure customers have the best dining experience.

Appetizers are a tantalizing beginning; Crab Rangoon lightly deep fried, stuffed with a cream cheese and crab mixture, and served with a light sweet and sour sauce.  Thai Dumplings are a meat/vegetable mixture, each steamed in a thin noodle skin and served with a hoisin dipping sauce.  At the next table, we heard the oohs and aahs over an order of Chicken Satay; tender grilled chicken strips with a peanutty dipping sauce.


Noodle dishes such as Pad Thai and Pad Se Eew; vegetarian delights, curry of various flavors and heat, and fried rice to pleasantly satisfy.  Oh so many choices!


Ja-Roen Thai Sushi offers authentic Thai and Japanese cuisines plus Sushi and Sashimi specialties to please the eye as well as the palate.  Thank you for coming to Monticello, you are exactly what the dining doctors ordered! 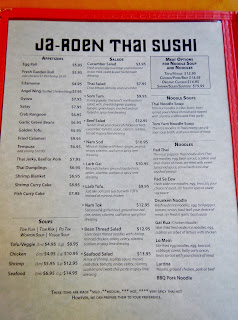 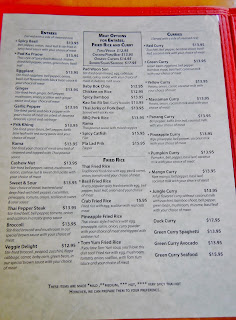 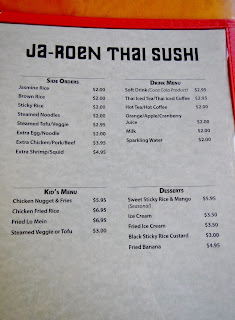 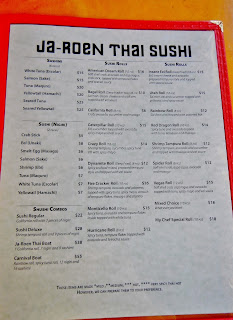 Posted by Four Corners Foodie at 11:47 AM