There are times you want to prepare a particular meal, but what do you do; you ask someone what would they like. Chances are they are going to tell you what they want, and it will not be what you were craving. Again, what do you do; the answer is (a) ignore them, (b) make what they want, (c) come up with a compromise. So it was with a top round roast, my desire for beef stew, but my husband's desire for beef stroganoff. Now if you think about it, a stew and a stroganoff are pretty similar in nature; the differences are more origination of the recipe and the cooking liquids.

With cooking techniques, beef stew can be created in the Oven, on the stove top, or in a Slow Cooker. It's pretty much the same for Beef Stroganoff. They have many of the same ingredients, so creating a compromise recipe of the two isn't a difficult task.  Two worries; how would it taste and how can I make it so it will freeze well?  The first question wouldn't be answered until I actually finished the dish.  The second question was answered by not using any pure dairy items such as milk or sour cream.  By using cream of mushroom soup and mixing it with red wine, instead of milk, I created a cooking medium that would freeze without separating or breaking on reheating.

Cooking time is between 6 to 7 hours with my Hamilton Beach Slow Cooker.  At 6 hours, while the potatoes were at the just beginning to get tender stage; the meat was still chewy.  At 7 hours, however, the potatoes were melt in the mouth as was the beef; the onions were supple and the peas did not become mushy.  The scent wafting throughout the house during the cooking process was enough to drive one's taste buds mad with wanting.

Compromise can be a very tasty experience. 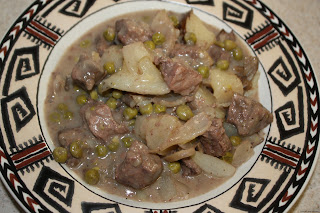 
Set a 6 quart slow cooker (crock pot) on low; spray interior with nonstick spray.  Mix the beef cubes with the flour; place inside the cooker.   Layer the potatoes on top of the beef; spread the onions and peas next.  In a medium bowl, mix together the soup, wine, mushrooms and black pepper; spread mixture evenly over top of all.


Cook for 6 to 7 hours, until beef and potatoes are tender.

Posted by Mary Cokenour at 7:40 AM