Hubby and I love tuna melts; tuna salad with melted cheese on grilled, buttery, crispy bread; this has got to be one of the top items on anyone's comfort food list. Of course, so is the classic tuna noodle casserole. Basically what I recently did was create a tuna melt within a tuna noodle casserole by taking out a couple of ingredients, adding others in and got the best of two comfort food dishes. Nothing fancy, nothing difficult, but everything in taste; and most especially feeling good all the way from the senses of taste and smell to that warm, comfy hug in the stomach.


Instead of typing out the recipe and leaving it at that, I'll do a breakdown of ingredients and preparation steps with accompanying photos.  That way you can compare directly with my first version (click on the link in the first paragraph) and see the differences. 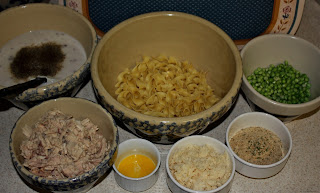 
Question?  Can fresh peas be used?  Most definitely, make sure they are firm, thoroughly rinsed and dried before using though; you want to avoid excess liquid as the casserole should be creamy, not watery.

Question?  Does Cheddar have to be used?  Sharp Cheddar balances out well with the mildness of the sauce, noodles and tuna; adding a mild cheese, it will get lost.  Adding cheese with a kick, such as Pepper Jack will boost the flavor...as to its comfort factor, that would be up to the person eating it.

Preheat oven to 350F; spray the inside of a two quart baking dish with nonstick spray; it doesn't give the casserole an oily residue like butter would. 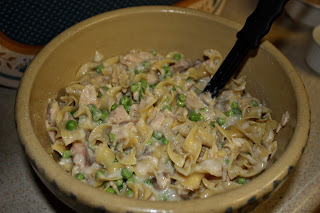 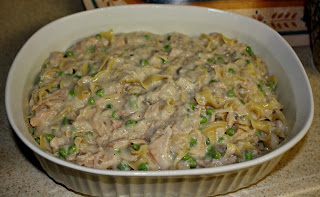 Spread this mixture evenly into the two quart baking dish. 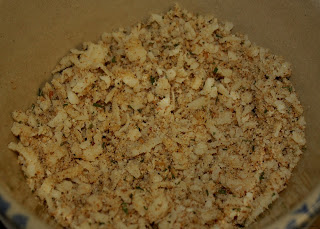 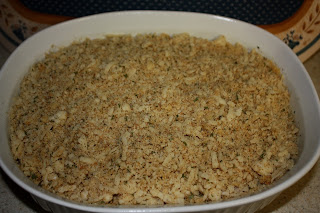 Now take that topping that was set aside and spread it out evenly over the noodle mixture; edge to edge around the dish.  I used the Italian flavored bread crumbs to enhance the flavor of the crust that will form.  If someone doesn't like the crumb crust, it can easily be removed from a serving without effecting the overall taste of the casserole itself.

Place the casserole into the preheated oven and bake for 30-35 minutes; liquid will be bubbling up to the top and the crust will be browned. The crust forms what is similar to the grilled bread and melted cheese of a tuna melt; while the noodle and tuna mixture is the "salad" part. Noodles aren't typically in tuna salad; but if you read my post on tuna melts (click on the link in the first paragraph), you'll notice I did put macaroni and cheese inside a tuna melt. 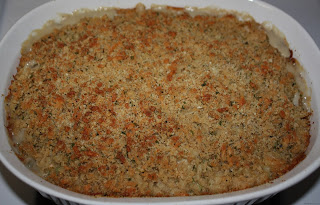 There you have it, my second version of Tuna Noodle Casserole giving credit to a Tuna Melt.  Enjoy!

Posted by Mary Cokenour at 3:45 PM