If you think about it, many food items come in a tubular form; examples are hotdogs, bratwurst, taquitos, burritos and rolled crepes.  In Italian cuisine, examples would be cannoli (a pastry filled with casada cream) and many pastas such as ziti, penne and manicotti.  I guess if you were a Freudian psychologist, you could come up with some type of fantastical sexual reasoning behind the use of this form, but I'm not even going there. 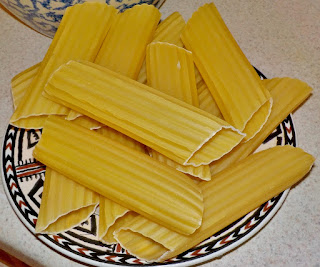 My main focus is Manicotti; a large tubular form of pasta, usually stuffed with cheeses, meats, veggies or a combination; covered in sauce and cheese, baked in the oven till tender.  Hungry yet?

Looking into the history of this Italian-American dish, there is a bit of controversy to its origins.  In the 1770s, Cannelloni is a Mediterranean dish originating in Catalonia, a region in Spain, and served on Boxing Day (December 26th…hey, that’s my birthday!).  However, Italian origins are claimed by Naples and Sicily with the translation being “large reed” in which pasta squares are filled with cheese/spinach mixture or chopped meats, rolled into cylinder shapes, baked in a rich tomato sauce with a Béchamel sauce topping.  The term Manicotti is a typical 20th century Italian-American word; the pasta sheets replaced with a tube form extruded by a pasta machine, or purchased in a dry form from the local shop or supermarket.  The filling and baking are essentially the same with a minor change here or there.

Manicotti can be a bit difficult to make as you have to be careful to not split the pasta when stuffing it.  Using freshly made pasta sheets and rolling them after filling takes the stress out this process.  Package directions say to cook until tender, but I pull them out of the boiling water when they are al dente. That way they are still a little firm, but flexible enough to stuff without breaking open; they'll become tender after the baking process is done.  In the overall scheme, if they break, who cares, they’ll still taste amazingly delicious!

It was suggested to me that I attempt baking the manicotti as I do my lasagna, by leaving the pasta uncooked.  Stuffing the tubes is just as difficult as with al dente pasta, there is still a possibility of breakage if the pasta is held too tightly.  I tried two methods in the stuffing process as well, first filling a plastic bag with the cheese mixture.  Basically this is the same idea as filling a pastry bag with icing and piping it onto cakes or cupcakes; or filling a cannoli shell with a creamy, sweet ricotta cheese mixture.  The cheese mixture is very thick and took a long time to squeeze down the tube; it was easier to break the pasta too.  I then placed one end of the tube into the bowl of cheese, to act as an anchor; held the tube lightly while filling it little by little with a teaspoon.  This process took a lot longer for filling, but no breakage! 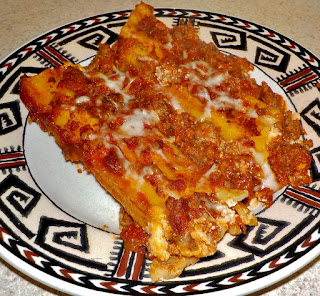 Note: you can add 1 cup of crumbled, cooked meat such as Italian sausage, or chopped raw spinach to the mixture.

Bring a large pot of salted water to boil on high heat; cook manicotti for 10 minutes, or until al dente. Strain manicotti out and place in large bowl of cold water to stop cooking process and keep them from sticking together.  (Skip this step if using the dried manicotti as is.)

While waiting for water to boil and pasta to cook, prepare the filling by place all remaining ingredients, except one cup of shredded mozzarella (one cup for each 4-quart pan) and the meat sauce, into a large bowl.

Preheat oven to 350F; spray a 4 quart baking dish with nonstick baking spray; spread 2 cups of sauce over bottom of dish. Use a teaspoon or piping bag to fill each tube; place into the baking dish. Spoon 2 cups of sauce over them, cover with aluminum foil and bake for 45 minutes.  Remove foil, spread one cup of mozzarella over pasta; return to oven and bake an additional 15 minutes.

Note: This recipe makes 2 full 4-quart pans; bake one to eat, wrap the 2nd pan in aluminum foil, then plastic wrap and place in freezer for up to 3 months. To bake, remove plastic wrap; bake with foil on for 1 hour at 400F; remove foil and continue to bake for an additional half hour.  To test cheese filling, stick fork into one manicotti, press lightly against mouth to make sure hot and fully baked.