In a pizzeria far, far away from Utah, square pieces of pizza are being devoured; and I am full of envy and want.  This is the second installment of pizza making - Sicilian Pizza, also known as The Square.  For those of you who happen to travel to the New York City area, go into one of those older, authentic Italian pizzerias and make sure you order correctly.  If you want to try a slice of the Neapolitan, or round pie, you say you want “a slice”.  If you want to try Sicilian, you want “a square”.  If you just say you want a “piece of pizza”, you will be asked, “Youwana slice or a square?”   Capisce?  (pronounced cah-PEESHis - an Italian word that is used in American slang to say "got it" or "understand."?)  Now you are thoroughly prepared to order.

What exactly is Sicilian Pizza?  This type of pizza originated in the Palermo region of Sicily.  This is a thicker dough than used in the round type of pizza (Napolitano (for Naples)) and baked in a heavy aluminum rectangular pan.  In the United States, it is mainly seen in New York and New Jersey pizzerias, and whether the cheese goes under the sauce or on top is dependent on each individual pizza maker.

“Tomato Pie” is a Sicilian pizza that has a thick layer of sauce over the cheese and is topped with a layer of diced or thinly sliced Roma tomatoes.   Why eat something so loaded with tomatoes?  Tomatoes have a wealth of vitamin and mineral content: Calcium, Potassium, Phosphorus, Vitamin C, Vitamin K1, Folate (Vitamin B9), Lycopene, Beta Carotene, Naringenin and Cholorgenic Acid  The last four are Antioxidants which have been found to be necessary for good heart, skin and joint health.

Enough with the lecturing, let’s get to making Sicilian and Tomato Pies.  Since the “crust” is very thick, like a nicely baked bread, I will also tell you how to make French Bread Pizza.  Now you can make it fresh at home, and not have to buy that frozen product at the store. 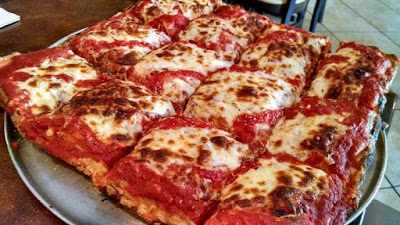 How to Make the Dough
Ingredients:

In a small bowl, combine the yeast with a ½ cup of flour and the warm water; cover with plastic wrap and allow proofing for 15 minutes; stir afterwards to deflate.

In a large bowl, combine remaining flour, salt, cool water and yeast mixture.  Turn the dough out onto a floured board and knead for 15 minutes.   Clean the large bowl, lightly dust with flour and return dough to it; cover with plastic wrap and let rise for 1 ½ hours.

Preheat oven to 450F.  Brush the bottom and sides of a 17 ½” x 11 ½” x ¾” heavy aluminum baking pan.  Punch down the dough, return to floured board and roll out slightly.  Place dough into pan and stretch out to all sides, leaving a lip all around.  Let it rest for 15 minutes before adding toppings*.

Bake for 30 minutes or until crust is golden brown.
Makes 12 servings.

*Note: toppings would normally be a layer of sliced mozzarella cheese and an evenly spread layer of sauce; other toppings such as meats and/or vegetables can then be placed over the sauce.

Lay out the slices of cheese onto the pizza dough; evenly spread out the sauce and then the tomatoes.

Bake for 30 minutes or until crust is golden brown.  Remove pie from oven and sprinkle grated cheese over top of pizza.
Makes 12 servings.

Now I could have made this Pizza Trilogy into a quad, but why drag out a good thing, right?

French Bread Pizza can be found easily in the pizza section of the frozen food aisle; but making it from scratch is just as easy.  Honestly though, would you not rather make it yourself?  The frozen product has preservatives, oven needs preheating, let it bake for 20 minutes and it is sometimes an unsatisfactory product.   Monticello’s food market, Blue Mountain Foods, sells loaves of, what they label French bread, but looks like a very soft version of Italian bread.  I like to use it when in the mood for pizza, do not have the dough handy, but want it now!   When it comes to spontaneous cravings for pizza, sometimes you truly have to get creative.

How to Make French Bread Pizza 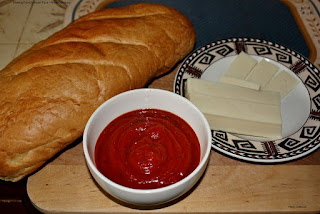 Basically there are three main ingredients: loaf of the wide French bread, a block of mozzarella cheese and pizza sauce. Cut the loaf in half lengthwise to create two half loaves; then cut these in half through the width.  If you want a rectangular look, cut off the heels first; save them to grind up and make bread crumbs.   Place the four pieces of bread, crust side down, on a large jelly roll pan.

Spoon sauce over the interior side of the bread; I use about 1/3 of a cup, but like a lot of sauce on my pizza.  While homemade sauce is best, use what you have handy.  Like I said before, sometimes when it comes to cravings, you have to be creative.   Now cut slices of the mozzarella, about 1/8" thick and lie them side by side until the bread is covered.  I find the sliced cheese melts better and creates gooey texture on the bread.

Of course you can add other ingredients - meats, veggies, whatever you like, but make sure the meats are cooked thoroughly before using.  Also, mix the meats and/or veggies with shredded mozzarella cheese instead; that way the cheese will melt all around the pieces.

Whether you are making this for yourself, other adults and/or children; have fun with it!