Such a Sweet Tart.

When I was a child, one dessert, that adorned the Thanksgiving and Christmas tables, was egg custard.  A firm, yet smooth and creamy, confection within its own small bowl; topped with a sprinkling of nutmeg.  No whipped cream, or any other topping, needed; it was pure perfection as is.  Once we moved to Pennsylvania, and began frequenting the farmers markets, custard pies were offered at every bake stall.  The filling was the same wonderful egg custard, but now baked inside a flaky pie crust.  The best part, I could have this all year long!  No more waiting for those two special winter holidays.  What could make it even better?  Learning to make it myself, and not depend on someone else to create it, or hope there was any left at the market to purchase.

So, of course, as with most of my food related articles, a bit of origin/historical want of knowledge nudges my brain into research mode.  While the French and the British debate on which country invented custard first, it was actually developed in Ancient Roman times.  Bakers and cooks understood the binding power of the incredible, edible egg.  Simmering milk, eggs and honey, in a clay pot, within a wood burning oven, the coagulation of egg proteins thickens the milk during baking.  The ingredients formed a firm texture, yet still had a slight wiggle in the center.

With the invasion of Britain, the Romans also brought with them their culture, and that includes food techniques, tools and recipes.  By the Middle Ages, the English were baking, boiling or steaming their custards.  The French though were adding fruit and fresh cream, then baking the mixture in a round, flat crust which became known as a tart.   While tart referred to “a flat open-topped pastry”, it was not until the 1800s that tart began to refer to “a woman of ill repute”.  Which might answer a question regarding the several cookbooks I have on pioneer cooking, “Why did they make puddings and custards, but no tarts with these fillings?”  Of course, later on in the 1900s, pudding and custard pies began making the rounds of the home kitchen.

Now I must warn you, while the recipe calls for the filling to go to the top edge of the pie crust, be prepared for spillage.  Aluminum foil covering the rack, and even a sheet on the oven bottom itself, will prevent a load of burnt on cleanup afterwards.  Maybe others have a better way of getting a very loose filling into a pie crust, but I have tried several techniques, and always manage to spill.  So I admit to being a baking klutz, but my goodies are still quite delicious, if not runway model perfect.

For this recipe, I also substituted Swerve for the sugar; due to my need for lower sugar content.  Allowing the pie to cool completely, for at least two hours, in the refrigerator, will give it a firm texture, but remain smooth and creamy.  Also, use whole milk as a lower fat milk will cause a need to bake the pie up to an hour longer. 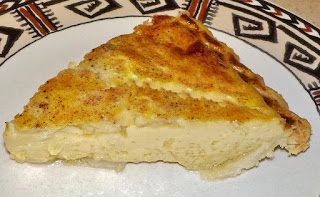 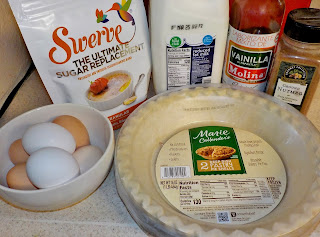 1 tsp. nutmeg, divided in half 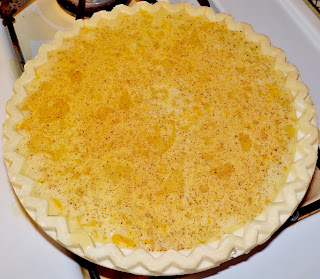 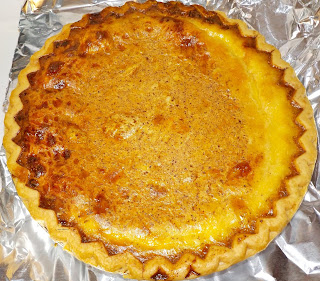 Bake for 45-60 minutes; filling will rise and firm up, with very slight looseness in center.  Remove from oven, let cool for 20 minutes before placing into refrigerator to completely cool; about two hours.

While delicious as is, adding fresh fruit to the top, or on the side will pretty it up.  Whipped cream, I have found, washes out the flavor of the custard and nutmeg.  Enjoy your sweet tart!