I do not believe in coincidence.  I do believe that happenings occur, at a specific time for a specific reason, and it is our life task to figure it all out.

This means that when I watched a favorite anime show, Food Wars, on Cartoon Network, and the main ingredient was bear, it was foreshadowing.  As it so happens, that very evening, Roy received a bear roast from BLM buddy, T.W. Carr.  Excitedly, we watched a rerun of the show, when it aired on another Cartoon Network channel (Dish has 2); the ideas practically jumped on me!  A week later, Food Wars featured the actual challenge, and both contestants, Soma and Akira, made their own versions of country fried steak using bear meat.  Oh, oh, I have made country fried steak, using beef…I could take on this challenge!

Bear meat tastes and smells gamey; the closer the cut to the bone, the more pungent it gets. The roast (1 and ¾ lbs.) had a noticeable, but not aggressive smell; two ways to cure this though; marinate in plain yogurt or red wine vinegar.  I chose red wine vinegar, since it is a tried and true technique for beef.  Slicing the roast up into 9-1/2 steaks, placed in an airtight container with the vinegar, they sat overnight in the fridge.  Next day, it was time to make those steaks into cubed, aka tenderized, steaks.

What exactly is "cubed" steak?  The term "cubed" refers to the indentations left in the meat after the tenderizing process.  Using a meat mallet, the ½ inch steaks are pounded out to ¼ inch thickness; breaking up any fat or ligaments deep inside the meat.  The steaks were then seasoned, both sides, with a mixture of salt, ground black pepper, garlic powder and cayenne pepper (enough to know there is heat, but no raging fire).  A dredging station of flour, eggs whisked with milk, flour again was waiting…light coat of flour, both sides; dip into egg wash; coat both sides and edges thoroughly with flour.


At the same time I was dredging the first four steaks, a large skillet, medium-high heat, was heating up 1 and ½ inches of peanut oil.  Yes, canola or vegetable oil can be used; I simply find peanut oil to be less absorbing by fried foods.  Normally cubed steaks are rather on the large size, just I only do two at a time; the bear steaks were smaller, so four, then five later, fit without crowding.

After three minutes, the steaks will float up and blood will be visible; do not touch them!  Let them fry for a complete five minutes before turning over.  Fry the other side for five minutes also, then remove to a plate layered with paper towels for draining.  Repeat with the next batch of dredged steaks.

On another burner, a saucepan of red onion gravy was simmering away; while a skillet was sizzling up hash browned potatoes containing diced onion and green bell pepper.  All sounds like the perfect making for a countrified dinner.

Slicing into the bear meat, it was perfectly cooked; a faint scent and taste of gaminess very much resembling aged beef.  The meat was tender, flavorful from the mixture of spices; the gravy only enhancing the taste and texture of both fried coating and cooked meat.  The hash browns slightly crisp, yet tender themselves which all lead to a perfect meat and potato meal.

Presenting it to Roy for Fathers’ Day, I could only utter the words of Soma Yukihira (main character of Food Wars), “Order up, and you’re welcome!”

Roy tasted, he swooned; no, his clothing did not explode off his body as it does on characters of the anime show.  His decision was, “Yes, you have won this challenge and may commence to the next level.”

Yeah, no, I did not bow, just said thank you and smiled a very big smile. 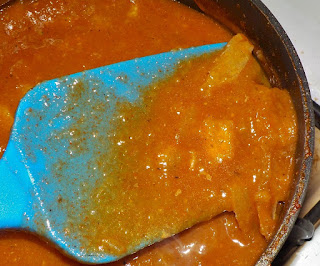 3 Tbsp. oil (oil from the skillet the steaks were browned in)

In a deep, 12 inch skillet, heat the oil on medium-high and sauté' the onions until they just begin to soften. Stir in the flour thoroughly before adding the tomato sauce, beef broth, black pepper and garlic. Bring to a boil and immerse the steaks into the liquid. Turn the heat down to low, cover and let simmer for 30 minutes before serving.

Hint: Make a double batch and freeze half; it defrosts and reheats well.