Anyone who has ever made a bread, from scratch, knows that the process does not go hand-in-hand with spontaneity.  Whether using yeast, or a sourdough starter, a living organism must be given moisture and nourishment to flourish.  Fermentation begins, and this is the creation of natural gases which will make the dough rise.  In beer making, whether breweries, or the home brewer, yeast is used, once again, for the fermentation process.  So, a popular slogan heard at beer festivals is, “Drink your bread!”

Quick bread recipes became popular as the production time was extremely shortened.  A quick bread uses baking powder and/or baking soda for the leavening process.  This means all ingredients can be mixed together immediately, baked, usually within an hour, and be ready to serve; well, quickly.  Quick bread is often referred to as a “cake bread”, as the consistency, dependent upon ingredients and baking time, can be very cake-like; for example, zucchini bread.

Now, who can we thank for combining bread with everyone’s favorite sweet treat, chocolate?  That would be the Jewish communities of Poland and the Ukraine, who brought, in the early 19th century, the recipe for Babka from Israel.  While it was referred to simply as yeast cake in the old country, Babka means “grandmother”, and who did most of the baking anyway, grandma of course!  Babka is basically left over challah dough (a yeast bread) which is rolled out, filled with chocolate (a 20th century addition), cinnamon, fruit jam, or sweet cream cheese; braided and baked.  Since the challah dough has already gone through the proofing and rising stages, Babka can be baked within an hour.

I enjoy reading, actually, it is an addiction and mysteries are my #1 go to.  Then again, I enjoy cooking too, so imagine the joy of finding books that have both!  Joanna Fluke, Joanne Pence, Karen Rose Smith, Chelsea Thomas and Diane Mott Davidson are just a tiny listing of the hundreds of authors putting out this type of novel.  Often referred to as “Cozy Mysteries”, it is the type of novel meant to be read in a day or two with personable characters, except the murdered ones.  Food is often mentioned, sleuths and killers have to eat too, right?  Then several of the mentioned foods have actual recipes printed at the very ending.  Best of both worlds, a mystery and a cookbook!

Hallmark, and Hallmark Movies and Mysteries, are two channels that feature many a movie, sometimes based upon an author’s series, or an original script.  However, do not judge a movie, or book, by its title.  Bread and Chocolate (1974) - about an Italian immigrant working as a waiter in Switzerland, but nothing about baking bread or creating chocolate. Blood and Chocolate (2007) - werewolf horror movie, once again, nothing about baking bread or creating chocolate.

Now that I have given you much to chew on (bread, quick bread, mystery novels and movies); how about a recipe, for Chocolate Banana Bread.  It is very easy to make (I really like easy), the finished product is three loaves (you can share!), and then there is another dessert recipe to try, Caramelized Bread Blast.

Shalena Bradshaw Black (Monticello City Recorder) gave me the idea of frying up the chocolate banana bread slice with butter and sugar.  My hubby, Roy, named it, and I was lucky to get a bite to taste for myself.

It is knock-you-right-out-into-outer-space amazing, and definitely restaurant quality....Order up, and you're welcome!!! 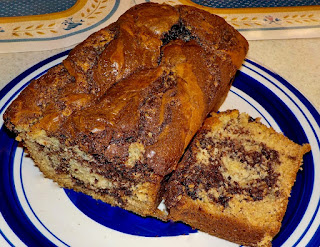 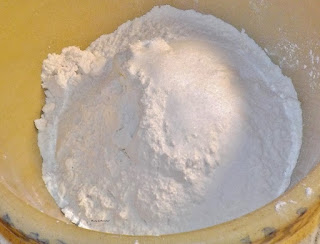 Into a medium bowl, sift together the flour, baking soda and salt. 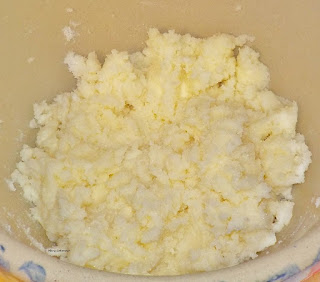 In a large bowl, beat butter and sugar until light and fluffy, about 2 minutes. Add the eggs, one at a time, beating well after each addition. Add the flour mixture and mix on low speed until just combined (will look exactly like a bread dough). Add the mashed bananas, sour cream and vanilla extract; beat until dry ingredients well combined, but not overmixed. 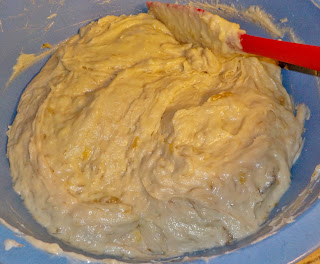 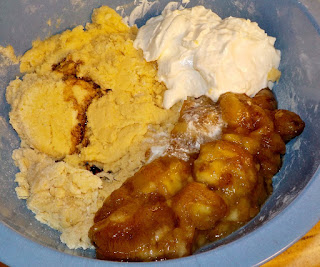 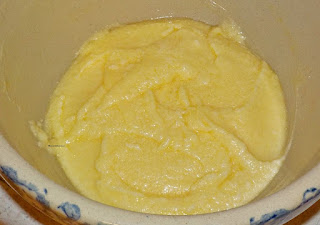 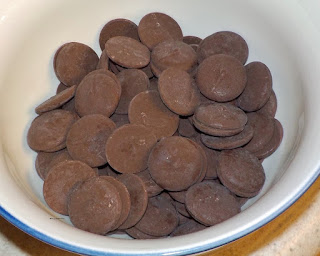 Place the chocolate in a microwave safe bowl. Cook on high power 20 seconds (3 times for full 60 seconds), stir in between each interval.  Remove from microwave, stir until smooth; add cocoa powder and stir until dissolved. 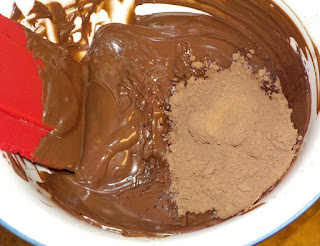 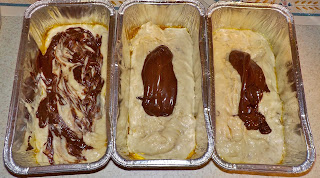 Spoon one layer plain batter and 3 Tbsp. chocolate alternately into the prepared loaf pans. Swirl together with a knife; do not overdo, or it will all look chocolate.  Repeat with remaining batter and chocolate.  Bake for about 1 hour, or until toothpick comes out clean. Cool in the pan on a wire rack to cool completely.  Wrap in plastic wrap; store in refrigerator.  Reheat ½ inch slice for 10-15 seconds in microwave, or butter and heat up in skillet on medium heat. 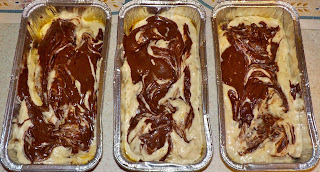 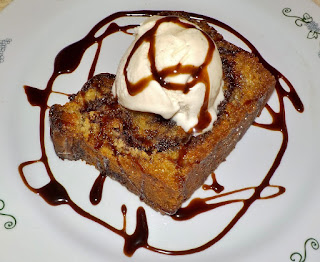 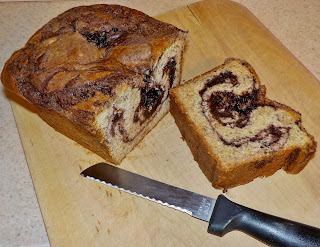 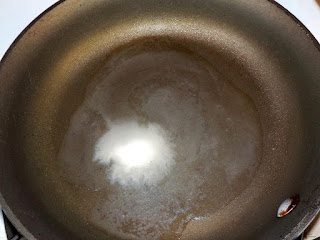 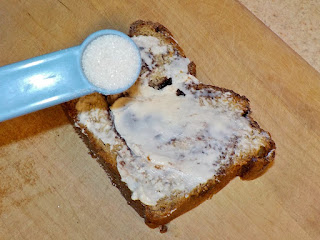 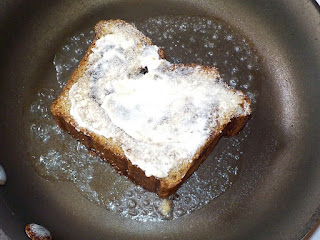 When butter in pan begins to sizzle, place bread, unbuttered side, down in pan and let fry for 2 minutes.  Flip over, let fry 2 minutes; butter and sugar will caramelize. 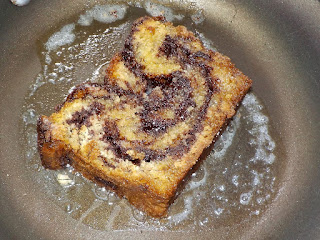 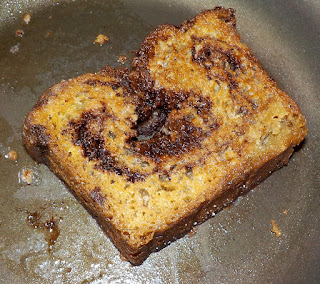 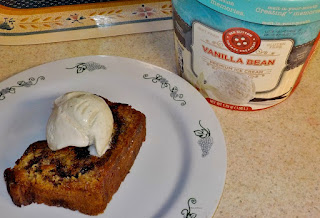 Place bread, caramelized side up, on plate; add scoop of vanilla ice cream; drizzle chocolate syrup over ice cream, and decoratively around bread.