Several weeks ago I received a tropical fruit gift basket and one item included was a coconut.  My first reaction upon seeing it was, "What the heck am I supposed to do with that!?!"  I had never worked with a real coconut before, just the bagged shredded coconut you get in the supermarket. On the counter it sat, watching me, staring at me, mocking me.

Occasionally I picked it up, walked over to the trash can, but no, I did not throw it out.  I refused to be beaten by a mere coconut.  I would shake it and hear the liquid inside; that is a good sign that shows that the coconut "meat" is still fresh and moist. Then I decided to do the most insane thing possible; I gave it to my dog to play with.  She loved tossing and chasing it around the yard, but then I noticed that she had stopped and was licking it profusely.  The coconut had a slight crack, and liquid was leaking out. 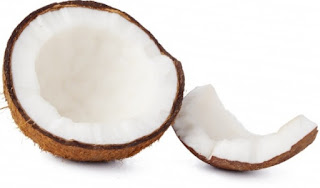 The coconut was small and I did not give much thought to cracking it open and trying to do something with the liquid myself.  Remember, I was looking at it as a protagonist; an enemy that needed to be conquered. Yes, I could have gotten a hammer, cracked it open in a proper way eventually.  What fun would that be? Anyway, I grabbed the coconut, took it out to the driveway and let it drop and split open completely.  The outdoor cats enjoyed the treat of the spilled coconut liquid and I felt good spoiling them a bit. 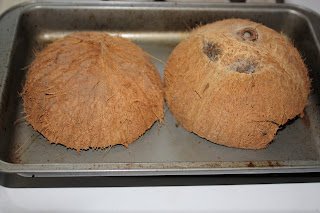 Right, so what do I do now? Finally went on the internet and looked up how to handle a coconut. I gave the two parts a good wash in water to remove any dirt. Most sites said to roast the coconut between 400F to 450F, so took the middle of the road at 425F and preheated my oven. I placed the two halves, open ends downward, into an aluminum baking pan. Now the coconut has a rather "hairy" exterior, so I covered them with a sheet of aluminum foil, leaving the ends open for air circulation. How embarrassing it would have been to have the hair on the coconut catch on fire. 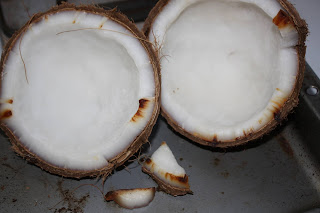 The coconut roasted for 20 minutes; the edges of the meat, closest to the shell, started turning brown. Removing the pan from the oven, the halves cooled till I could comfortably handle them. Using a meat mallet to whack the shell and a butter knife between the shell and meat, I removed the meat; it will break apart if you are not gentle with this procedure. The meat will have a firm brown skin on it and this can easily be removed using a vegetable/potato peeler. Again, be gentle as it can break apart easily. 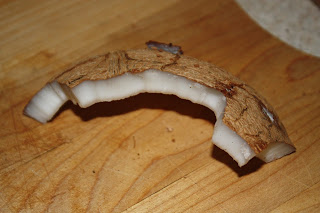 The final tool you will need is a grater for shredding the deskinned coconut meat. Now you might want to use a food processor, but the meat is very moist, so do not be surprised to constantly be cleaning your blades. In this instance, a grater is just more logical and efficient to use.  After shredding, I was able to fill a quart size freezer bag; squeeze the air out before sealing and it will last about six months in the freezer. 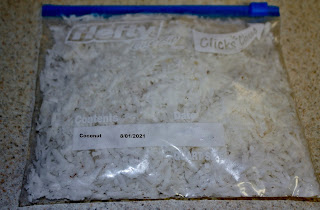 Would I ever try this again?  Yes!  I have a bag full of freshly roasted and shredded coconut that I created with my own hands.  I will be more careful when cracking it open though, and save the liquid for another use.  Sorry dog and kitties, but this treat you only get one shot at.