The BER Months are to RememBER.

I have been seeing many references to the “BER months are here!” which means the last four months of the year: September, October, November and December.  Why do these months have the same ending?  In ancient Rome, the calendar had only ten months, all named after various gods or emperors.  The ninth month had two months jammed into it, September and October.  The tenth month was unnamed, but contained November and December.  Seems like those four months were an afterthought, and not very important, doesn’t it?  Their names were simplified by using the adjectival suffix “ber”, while the prefix indicted the number of the month.  March was the first month of the ancient calendar, and September, October, November, and December were months 7 (from septem, Latin for seven), 8 (octo, Latin for eight), 9 (novem, Latin for nine), and 10 (decem, Latin for ten).  Thanks goes to Julius Caesar for creating the Julian calendar, and allowing those last four months a free reign of their own.

In more modern times, the “ber” took on a weather related meaning.  When spring and summer have been hot and humid almost the entire six months, the start of the “Ber” months signals the start of cooler weather.  Agriculturally related, it signals the time for final harvesting of fruits and vegetables; or time to plant and harvest the winter wheat.

I believe it has a more profane meaning though.  Spring brought blooming trees and flowers, and a time for animals to bear their young.  Summer, even if hot, was fun in the sun, barbeques, and vacations.  Now, with the start of the “ber” months, it is time to begin to RememBER.  It is now time to begin to look back at the year, as its end will be here soon enough.  It is time to begin reflecting on what we experienced, accomplished, created and shared.  2020 was hard on us all, and remembering it did not bring the best memories to mind.  2021 has also been a hard year on us all, but, at times, eased up and gave us time to relax and breathe.

So, as we begin to crave apple cider, pumpkin spice and the last taste of fresh-from-the-garden vegetables, remember!  Remember your dearest friends and family members.  Remember the good times, and how the bad times were overcome with hard work and endurance.  Remember your neighbors!  Did they share with you their garden’s bounty, but you forgot to share yours with those who needed?  There is still time to make amends, still time to pay-it-forward.  Come December, wishes will be made upon gifting lists.  Remember though, whether it is God, another Deity worshipped, even Santa Claus himself; they are all making their own lists of who has been greedy, and who have been giving.

Now, as much as I love a cold glass of crisp and spicy apple cider, attempting to make it from scratch has not been on my to-do list.  I admit it, I was spoiled by being able to buy it at a farmers market; or even the fruit section of a supermarket.  On a cold night though, heating it up, adding a dash of rum or brandy, and a cinnamon stick to act as a stirrer, is a lovely option.

Who knows though, if the price on apples gets back to being reasonable, I just might take on the challenge!

Until then, let me share with you a recipe from another food blogger, Sally’s Baking Addiction.  Her recipe allows for apple cider to be created in either a crock pot, or a stock pot; and she gives directions for storage as well.  Oh, and let’s RememBER to share, and be grateful to those who shared with you. 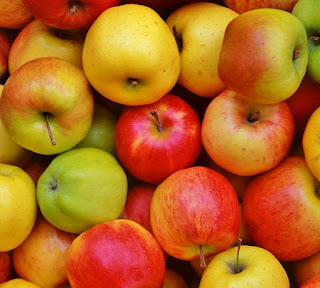 1 - Peel the orange and place the segments in a 4 quart or larger slow cooker. (Pictures show unpeeled- we prefer peeling it for a less bitter flavor.) Wash the apples, cut into quarters, and place in the slow cooker. Add the cinnamon sticks, ground cloves, and sugar. Add enough water to cover the fruit.

3 - After 6-7 hours, the fruit will be very soft. Use a large spoon to mash the fruit and release its liquids. Allow the cider to cook on low for 1 more hour.

4 - Very slowly strain the chunky liquid though a fine mesh sieve into a large pot or pitcher. You can discard the solids. Strain the cider one more time to rid any other solids. Serve the cider warm.

Leftover cider keeps well in the refrigerator for up to 5-7 days. Warm up on the stove before serving or enjoy it cold.  Yields about 1 and ½ quarts.

Freezing Instructions: Cider can be frozen up to 3 months. Thaw in the refrigerator.

*Sugar: Adjust the sugar to your taste. We usually use 3-4 Tablespoons of granulated sugar for a spicier cider. If you prefer your apple cider on the sweeter side (like the kind you buy at the store), use 1/2 cup (100g) of granulated sugar.

No Slow Cooker? No Problem! In step 1, place all of the ingredients into a large stock pot instead of a slow cooker. Turn the stove up to high heat and bring everything to a simmer while stirring occasionally. Once simmering, reduce the heat to medium-low, cover, and simmer for 2 hours. Mash the fruit as described in step 3. Then, allow the cider to cook for 1 more hour. Continue with step 4.

…and once you have made that cider, go back to the November 17, 2020 issue of the San Juan Record, and look up my recipe for Apple Cider Donuts.  The smile on your face will just get bigger as you indulge in those.  Or click on Here to go directly to the recipe, on this food blog.