Thanksgiving leftovers stocked in the refrigerator, and the thought of one more cold turkey sandwich makes you winch a bit?  Now this scenario might not be an issue in your home, but for others it is, as they want the leftovers gone now!  Many, like myself, clean off most of the the meat and freeze for later comfort meals of turkey strata, tetrazzini or added to a hearty soup.  The bones themselves are simmered in seasoned water, strained, and the savory stock also frozen.

For many years, I watched many a show on Food Network or The Cooking Channel, and I gained truckloads of knowledge.  Well I should also admit to watching PBS cooking shows on Saturday afternoons, and this started well into my teens.  Once I moved to Pennsylvania, I would attend a “food-con” in Ephrata, and I attended demonstrations of many of my favorite PBS chefs.  Buying a latest cookbook, getting it signed, and speaking with the chef; oh I was wowed for days; and could not wait to attempt some recipes.

As with MTV (remember when it showed actual music videos!?!), I have noticed, that the channels geared towards food, are now more prone to game shows or competitions.  Too fast paced and definitely not informative enough for me.  Back in the middle 2000s though, there was one show that was a competition, but slow paced enough to allow the viewer to make notes, and learn.  Throwdown with Bobby Flay was looked forward to weekly, not just to see if someone could beat him, but what new recipe might be tempting enough to try myself.

Now why am I rambling on about cooking shows when I first began writing about turkey leftovers?  To share with you all a recipe, learned on Throwdown, tried out at home, and deemed most delicious!  The Hot Brown was featured (Season 2, Episode 13, Air Date: July 10, 2007); Joe and John Castro, chefs of the Brown Hotel in Kentucky, competed and won against Bobby Flay.  The Hot Brown could be considered a fancified version of an open-faced hot turkey sandwich, or, as the originator intended, the Welch Rarebit.  Originally created during the 18th century and called Welsh Rabbit, no actual cute, fluffy-tailed bunnies were used, so the name changed to Rarebit.  Welsh Rarebit is a British dish consisting of a hot cheese-based sauce served over slices of toasted bread, often topped with tomatoes and bacon.

The Hot Brown was created in 1926 by Chef Fred K. Schmidt; he worked at the Brown Hotel, located in Louisville, Kentucky.  “In the 1920's, The Brown Hotel drew over 1,200 guests each evening for its dinner dance. By the wee hours of the morning, guests would grow weary of dancing and make their way to the restaurant for a bite to eat. Sensing their desire for something more glamorous than traditional ham and eggs, Chef Fred Schmidt set out to create something new to tempt his guests' palates. His unique dish? An open-faced turkey sandwich with bacon and a delicate Mornay sauce.” (History of the Hot Brown: https://www.brownhotel.com/dining/hot-brown )

Here is that original recipe. 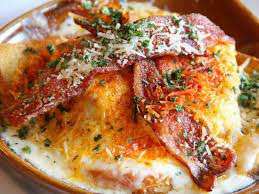 Plus 1 Tablespoon for Garnish

2 Roma Tomatoes, Sliced in Half

In a two-quart saucepan, melt butter and slowly whisk in flour until combined and forms a thick paste (roux). Continue to cook roux for two minutes over medium-low heat, stirring frequently. Whisk heavy cream and whole milk into the roux and cook over medium heat until the cream begins to simmer, about 2-3 minutes. Remove sauce from heat and slowly whisk in Pecorino Romano cheese until the Mornay sauce is smooth. Add nutmeg, salt and pepper to taste.

For each Hot Brown, place two slices of toast with the crusts cut off in an oven safe dish – one slice is cut in half corner to corner to make two triangles and the other slice is left in a square shape - then cover with 7 ounces of turkey. Take the two halves of Roma tomato and two toast points and set them alongside the base of the turkey and toast. Next, pour one half of the Mornay sauce to completely cover the dish. Sprinkle with additional Pecorino Romano cheese. Place the entire dish under a broiler until cheese begins to brown and bubble. Remove from broiler, cross two pieces of crispy bacon on top, sprinkle with paprika and parsley, and serve immediately.

Around the same time, I found a similar recipe, by Paula Deen, but the Hot Brown was made casserole style.  Since we held gaming groups regularly on Saturday nights, I used our players as guinea pigs, and happily there were no leftovers and only praises. 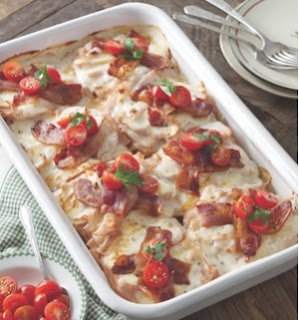 In a medium saucepan, melt butter over medium heat. Whisk in flour; cook for 1 minute. Gradually whisk in milk; cook, whisking constantly, until thickened, about 6 minutes. Remove from heat, and whisk in 1 cup Swiss, Cheddar, salt, and pepper until melted.

Broil until cheese is melted and lightly browned, about 4 minutes.

Top with bacon and tomatoes. Garnish with parsley, if desired. Serve immediately.

There you have it, two recipes to help those turkey leftovers have an original taste, and new recipes to add to your book or card file.  Enjoy!