I'm getting ready to make a noodle side dish to go with my seared chicken and wanted to add corn to it. In my pantry I find a can of Mexicali corn, it has corn and diced bell peppers in it, so that would work fine. The corn is a nice yellow color and firm; the peppers, however, have much to be desired as in "where the heck are the diced bell peppers!?!" They're more like flakes than actual pieces of the vegetables; there are also listed sugar and salt on the can and I'm wondering why do I need sugar in a vegetable dish? Think about the cost too; an 11 ounce can of Mexicali corn is approximately 25 to 50 cents more in cost than a 14.5 ounce can of whole kernel corn. Believe me, flakes of bell pepper do not justify a smaller quantity costing more; and if I want sugar and salt in my vegetables, I'll add them myself, thank you very much! 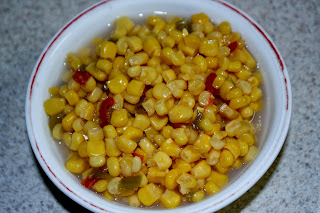 What exactly is Mexicali corn (aka Fiesta corn) anyway?  The name infers a cuisine fusion of Mexico with California, but both areas have corn and bell peppers; where is the distinction?  Looking up recipes in books and on the internet I have made a profound discovery; Mexicali corn is nothing more than a salsa and ingredients are determined more by the cook's tastes than locale.

Well then, instead of wasting my money on a canned product which obviously has ingredients I do not want, and actually is pretty useless altogether; I might as well make my own.  Oh wait, I already have and I named it Confetti Salsa. 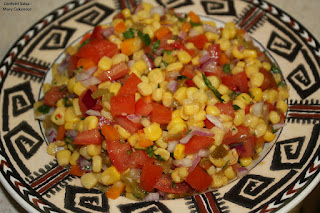 Cut tomatoes in half and scoop out fleshy pulp and seeds; cut into strips and dice. Steam the corn over boiling water until just tender; place in refrigerator to cool. Into a medium mixing bowl, add all ingredients and gently mix. Refrigerate for one hour before serving.


When I make the noodle side dish, I will be leaving out the tomatoes, jalapeno pepper, lime juice and cilantro; as I said, it's up to the cook's tastes.  The complete recipe?  That's for another posting at another time.