Back in 1985, a coffee cake recipe came out in a woman's magazine "Woman's Day", "Good Housekeeping", "Better Homes and Gardens"; I don't know which one.  A friend, at that time, had made the recipe, the cake was delicious, so she passed the recipe on to me.  Somewhere in my many, many handwritten recipes books is the recipe, but I was too lazy to wade through all the paper.  So, I went online to see if anyone had posted the recipe somewhere; I found many versions, but not the one I truly wanted.

Then I noticed "Copycat of Starbucks Coffee Cake", clicked on the link and there was the recipe I'd always used; but with two minor changes.  See, when it comes to recipes, you can make someone else's recipe your own by simply changing two ingredients; so Starbucks used sugar instead of brown sugar, and added a sprinkling of powdered sugar.  Or so I think they did, since this is a copycat recipe, so the blogger basically thinks this is how it's made.  The blog is "Your Homebased Mom", and here is the link to her recipe: http://www.yourhomebasedmom.com/copycat-recipe-starbucks-coffee-cake/.

I made the appropriate changes, typed the recipe up on the computer, and now I have it in a more convenient place.  I made four cakes and the one mistake I made is to forget I live in a high altitude location (7100 feet above sea level), so forgot to add extra flour, and reduce the oil, to the cake mix.  The cake batter bubbled over the topping and was tacky on top of three of the four cakes; but they were still delicious.  Well at least I hope they were; I gave those away, but I haven't heard any complaints, or they're just being nice.

Anyway, here is the original recipe from 1985, so now you can copy me instead of Starbucks.  Of course to get the four cakes, I doubled up on the recipe; and used 8" x 8" aluminum pans; instead of two 9" x 13" ones; easier to give away that way.  By the way, at that time, moist cake mixes were just coming onto the market, so this recipe called for those original "non-premoistened" mixes.  Women began adding extra ingredients such as buttermilk, yogurt or sour cream to get the cake to be moister and richer.  No need for that now! 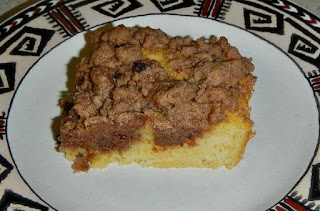 Coffee Cake Made From Cake Mix


Prepare cake mix in large bowl according to directions on box; pour batter into pan.  Bake at 350 for 15 minutes; batter will still be liquid. 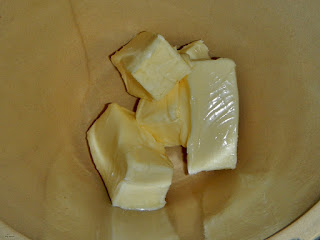 While cake is baking, prepare crumb topping; in large bowl combine butter, flour, cinnamon, brown sugar and vanilla until all crumbly (use pastry cutter or hands).

Immediately after cake is removed from oven, break crumb topping into marble size pieces with fingers, sprinkling over top.  Put back in oven and bake an additional 15-20 minutes;  topping will begin to look less wet, toothpick inserted into cake will come out clean.   Let cool before cutting into squares.

Posted by Four Corners Foodie at 10:58 AM