Squash the Holiday of Thanks.

Thanksgiving Day; a full day devoted to giving heartfelt thanks for family, friends, good health, prosperity, and, in general, the full bounties of life.  These aspects of life should be thanked for on a daily basis, so why the need for an established National holiday?  Let’s take a brief walk down history lane to find out, shall we?  (From The Thanksgiving Book by Jerome Agel and Jason Shulman)


1610 – Only 60 survivors, of 490, remain of the English settlement in Jamestown, Virginia.  A day of Thanksgiving, in the spring, is dedicated to prayer, and praise for the ships that arrive from England carrying supplies.


1621 – Only 55 survivors, of 102 Pilgrims, have a three day celebration for the first autumn harvest (corn, squash, fish and meat from hunting (no turkey!).  The Wampanoag Indians are invited, and this is cited as the first unity between Native Americans and white English settlers.


1789 – President George Washington declares a “National Day of Thanksgiving” to be November 26th to celebrate the ratification of the Constitution.  He left it to each State to decide if it should be celebrated or not; it failed to be an annual event due to lack of interest.


1863 – President Lincoln declares the last Thursday of November to be a “Day of Thanksgiving and Prayer”, believing it would help bring an end to the Civil War; all government departments must be closed.  Sometimes it was the 4th week of the month, sometimes the fifth week until 1941.


1941 – President Franklin D. Roosevelt declares Thanksgiving to be the 4th Thursday of November and that’s the way it’s been since.


As you’ve read, the true meaning behind Thanksgiving depended on life, death, governmental achievements, or the attempt to end war.  Even the Mormon pioneers of 1847 did not celebrate Thanksgiving until October 1848.  The Salt Lake Valley was burnt due to the harsh July sun; the desert was barren, alkaline, with sparse sage brush and cottonwood trees.  Much time and energy was devoted to irrigating and cultivating the soil before a real bountiful harvest could be achieved.  “…the pioneers rejoiced with a Thanksgiving harvest festival, literally giving thanks for their continued survival. (Mormon Pioneer Cookbook by DUP)


One item at the harvest table was Acorn squash which gets its name, not only, from the acorn shape, but from the nutty flavor of the flesh inside.  Acorn squash (Cucurbita Pepo) is low in calories, fats and carbs, since it contains no simple sugars; it is high in fiber and digests easily.  A single serving contains vitamins A, C and B6; also thiamin, folate, pantothenic acid, manganese, magnesium and potassium. The squash itself can be cooked by baking, steaming or microwaving; it can be eaten right out of its shell or stuffed, pureed for soup, added to mashed potatoes, or frozen for later use. If you were thinking that butternut or spaghetti squash were the only versatile ones, aren't you surprised now?


One of the typical ways to make acorn squash is by baking it in the oven and then coating the flesh with a butter and brown sugar mixture (the pioneers used molasses salt, cinnamon and nutmeg).  Reading my food related articles, you know I don’t follow typical recipes. Oh, I did bake it in the oven, but then stuffed it where it could be eaten as a meal in itself, or as a side dish.  Vegetarians would be happy with this dish, and while I add Romano cheese to it, it would be their choice depending on how strict a regime they follow.


From the Cokenour family to you and yours, Happy Thanksgiving; and eat up for tomorrow we diet!  Well, not really until the New Year, but it’s the thought of losing pounds that counts. 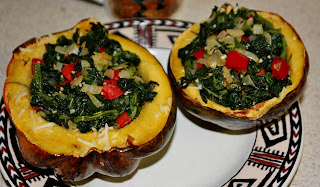 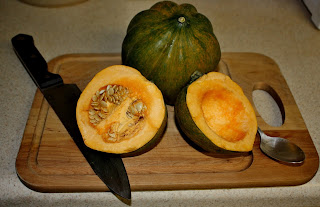 Rinse squash in water and pat dry; cut in half and scoop out seeds and stringy pulp with a spoon. Place on baking sheet cut side down; bake for 30 minutes. 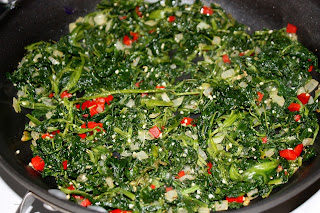 While squash is baking, heat 2 tablespoons of oil in a large skillet, over medium-high heat; sauté’ onion and bell pepper for 3 minutes. Add in garlic, let cook for another minute before adding the leaves, salt and Italian seasoning. Mix thoroughly and let cook for 5 minutes before removing from heat; keep warm. 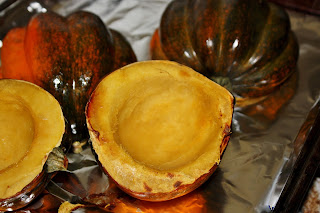 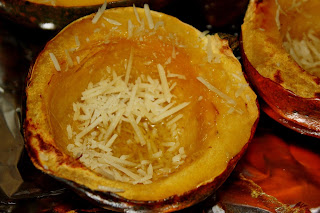 After 30 minutes, remove baking sheet from oven, turn over the squash halves and place together to help hold each other upright.  Drizzle a teaspoon of oil and sprinkle a teaspoon of cheese inside each half.  Stuff with the leaf mixture; return to oven and bake for 5 minutes before serving.


Serves 4-6 depending on size used. 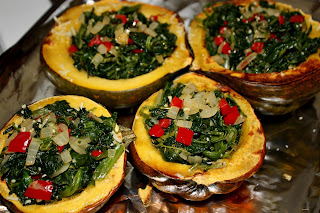