So, here I am, sitting at my desk and typing merrily away on my computer’s keyboard.  It is just going on 6:30am, and I have already experienced many joys of nature.  First and foremost is the backyard neighbor’s “elephant rooster” waking up the household at 5am.  I call it an “elephant rooster” as it trumpets like one from around 5am, sometimes even 4am, and continues throughout the day.  I do not understand rooster language, but obviously this one has much to inform the neighborhood about.

Letting out the dogs to do their morning absolutions, I prepare the food for the indoor pets, as well as the outdoor kitty family.  The kittens are already up, jumping and playing, while Mama Callie looks on with sleepy eyes.  Putting down their food dish, the kittens will not eat until I pick up each one, give kisses and a belly rub, which earns me some very loud purr action.

About an hour later, the coffee, vanilla caramel flavor this morning, is brewing and the food dishes are being washed up.  Gazing out the kitchen window, I am greeted by the lovely sight of a hummingbird at the water feeder.  It enjoys sipping at the sugar water (only natural cane sugar, no red food dye); its wings beating furiously, yet I can still make out the iridescent colors of its plumage.  Oh, now I have just shocked myself as I have spelled “iridescent” correctly, and not even had my first cup of coffee as yet.

While the temperature outside is still cool, a slight breeze swaying the tree branches, I know it will be another hot, dry day.  After experiencing such joy from nature this morning, I remember the fires burning in our forests, and my heart aches.  The trees, plant life, the wild life; spring saw the birthing of animal babies; were their parents able to get them away in time?  Whether by nature’s own doing (lightning), or the sheer stupidity of man (abandoned camp fire), fire destroys, and the loss is heart breaking.

…and now to thoughts on food.

Pepper steak, a stir-fried Chinese American dish consisting of sliced beef steak cooked with sliced green and/or red bell peppers plus seasonings of soy sauce and ginger.  Sliced onions area common addition; bean sprouts for a little more texture.  The dish originated from Fujian cuisine, where it was known as qingjiao ròusi, the meat of choice being pork.  A similar dish, called chin-jao rosu is found in Japanese Chinese cuisine.  As Chinese restaurants began to expand throughout the United States, around 1948, diners were introduced to pepper steak.  However, due to religious, or health, reasons, many could, or would, not eat pork, and beef is definitely all-American.

While researching the origin, I came upon a definition of pepper steak which simply is, “strips of steak sautéed with green peppers and onions”.  However, a second definition gives this dish a French twist, “steak covered with crushed peppercorns, pan-broiled, and served with brandy-and-butter sauce”.  This refers more to Steak au Poivre.  In 1961, Julia Child introduced this recipe to America when it was published in the New York Times.  It is featured in her cookbook, Mastering the Art of French Cooking, and now it is bragging time.  She actually put out two books, Part 1 and Part 2, and I happily found a first edition of each at an antique shop, of all places.  In 2002, food blogger, Julie Powell challenged herself to cook, daily for an entire one year, a recipe from these Julie Child cookbooks.  The movie, Julie and Julia depicts the adventure, and while a well done movie, there is no way I personally would ever take up a challenge like this.

However, I do challenge myself to come up with new ways of cooking up an “old” recipe.  Did you ever get in the mood for a dish, but wanted another one as well?  Do you cook up both, pick just one, or do something unique like combining?  Well I ended up combining ingredients that would fit pepper steak, but also Russian stroganoff; and all due to not having any fresh, or canned, mushrooms!  Basically I fused a Chinese dish, pepper steak, with a Russian one, stroganoff, and came up with…oh, the smell, the taste, it was all intoxicating!

I have written up stroganoff before, but as a reminder, credit for the recipe has been given to three people. The history behind this dish is vague: #1 – 1850s created by a chef for Count Grigory Stroganov who had rotten teeth and needed the meat to be very soft.  #2 – 1891 created by French Chef Briere for Count Pavel Alexandrovich Stroganov; using shallots.  #3 – 1871 Elena Molokhovets writes a cookbook for young housewives; her recipe uses mushrooms, onions, bouillon, allspice and mustard.

My recipe calls for the dish to be cooked in a crock pot for eight hours; the beef becoming so tender, it simply melts in the mouth.  So now, I present to you, Pepper Steak Stroganoff. 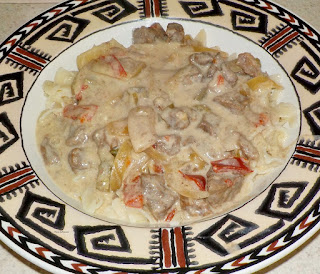 1 cup each green and red bell peppers, cut into half inch slices

Spray 4-quart crock pot with nonstick cooking spray.  Add in beef, sprinkle flour over cubes, vinegar, Worcestershire, bell peppers, onions; in that order.  Mix together stock, black pepper and garlic; pour over all in the pot.  Cover, set on low, and cook for 8 hours. 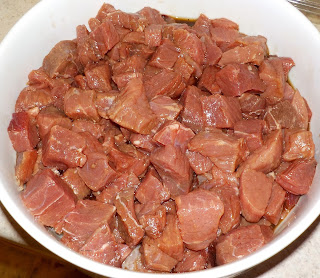 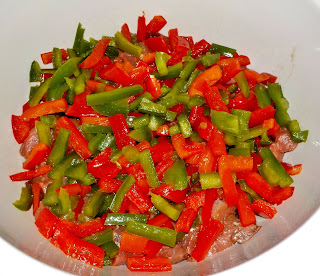 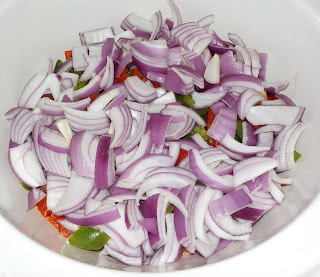 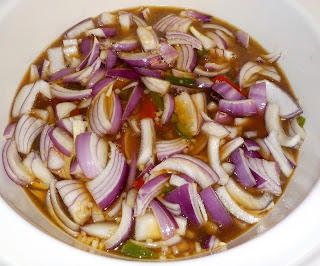 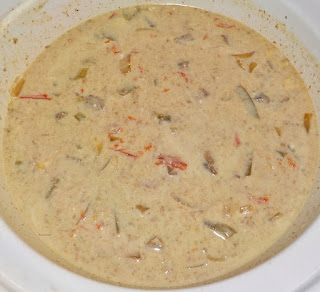 At the 7 hour mark, cook the egg noodles according to package directions, drain, and place in bowl; gently mix in butter until melted and noodles coated.  At the 8 hour mark, add sour cream to crock pot, mix well, and serve over egg noodles.