Reversal of Fortune, Butter into Cream.

“If you’re afraid of butter, use cream."

"The only real stumbling block is fear of failure. In cooking you've got to have a what-the-hell attitude."

Depending on the recipe, there are often times that cream, whether half n’ half or heavy, can be substituted for butter.  Then again, what is butter, but emulsified fat globules from the churning of milk or cream. In using cream, there is a satisfying smoothness that coats the tongue, whereas butter can be an unsatisfactory oil.

One of my favorite recipes is piccata which, in Italian, translates to “larded”.  It is a technique where chicken or firm fish is sliced thin, coated in flour, browned in oil, and finished off in a sauce of butter, lemon juice, and capers.  What are capers? They are berries that have a lemon tang, yet the flavor of olives that have been brined, aka salty.  They are more often found in Mediterranean and Middle Eastern recipes, since they grow primarily in those areas.

However, in France, piccata refers to the word “pique” which means “sharp”, and the sauce is made with butter, lemon juice and spices; no capers. The cooking style of dredging in flour and frying though is the same.  So, whether you travel to Italy or France, definitely try piccata, but expect a sincere difference in sauces.

Now, I am not afraid of butter, as Julia Child’s quote might imply, but I do enjoy experimenting in the kitchen.  I believe most of my experiments come from, “I have this (insert name of food item) in the fridge or pantry, and I wonder what would happen if I substituted it for…?”  It is a curiosity behavior inherent in the human psyche.  How else would we have all our modern benefits, such as the wheel, exist, if we were not curious beings?

So, instead of traditional butter, and a couple of minor adjustments, my chicken piccata found itself draped in a creamy lemon sauce.  As side dishes, I took a 16-ounce bag of frozen California Mix vegetables, added a cup each of julienned bell peppers (more colors the prettier it looks) and onions.  The vegetables were stir-fried in two tablespoons of olive oil, seasoned with salt, ground black pepper and a couple of dashes of garlic powder.

The other side dish was a saffron rice; 2 cups of rice, cooked in 4 cups of chicken broth with 10 strands of saffron.   What is saffron?  A spice collected from the saffron crocus; the threads/strands are the stigma.  The taste is sweet and floral while saffron that tastes bitter, metallic, or plastic-like are cheap imitations that should be avoided.  This spice is rather expensive, so a substitute for the 10 threads is ½ teaspoon turmeric plus ½ teaspoon paprika.  The use of chicken broth diluted the saffron’s red color, so the rice allowed the vegetables to pop their colors on the plate, yet was still a delicious addition.

In one month’s time, I needed to make this dish twice, as Roy became addicted to it.  The tanginess of the lemon, the smoothness of the creamy sauce; oh yes, you will want to lick that plate clean!  Not telling if Roy did that, I will just leave it to your imagination.

Meals becoming a little boring, or need a wow factor for guests?  Try Chicken in Creamy Lemon Sauce, and wake up your, and everyone else’s, taste buds. 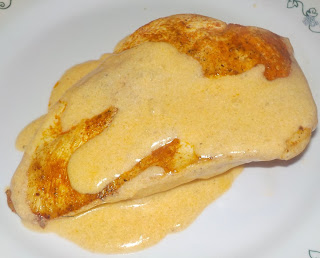 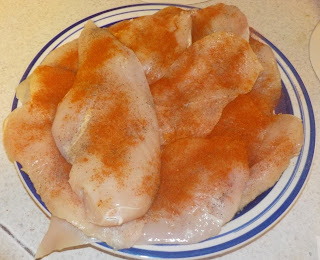 Mix together salt, pepper and paprika and season one side of the split chicken breasts.  Heat olive oil, medium-high heat, in large skillet, and brown chicken, 5 minutes, on both sides.  Add vinegar and lemon juice, cover skillet and let simmer for 5 minutes.  Remove chicken to plate.

Raise heat to high, add chicken stock and flour, whisk till smooth. Add half n’ half, bring to boil; whisk until smooth and creamy.  Spoon sauce over chicken. Makes 8 servings.

Posted by Mary Cokenour at 2:51 PM