When you hear the term "Homemade Pasta Sauce", do you immediately think that that is its only use? In Italy, pasta sauce is referred to as gravy, so while it can be used to cover, or enhance, something cooked, it can also be used as a cooking medium. 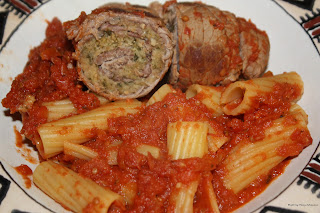 I'm going to take sauce and show you how to make Braciole, or Italian Stuffed Rolled Beef; and it is essentially cooked in homemade pasta sauce. Braciole can be looked at as one of those "fancy" type of meals, and I've only had it at holiday time.; served with pasta of course.  It is actually not a difficult meal to create; it's the tying of the meat rolls with butcher's string, and then untying after cooking that can get a bit annoying. Hint, don't do each roll immediately upon rolling; make a group of them and then tackle them one by one, so you develop a rhythm of tying, knotting and snipping excess string. You're done before you know it! 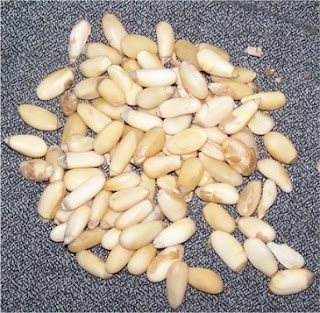 One of the ingredients in my stuffing is pine nuts.  The most common designation for nuts in Europe is "pignolia," a term which refers to pine nuts of the Italian stone pine, grown for the most part in Spain, Portugal, Italy, and North Africa.  Nuts of a different species called "pinion," a name derived from the Spanish word for pine nut, are produced in the western United States. These pinon nuts come mainly from the Colorado pinon tree, a two-needled pine which grows wild in the states of Colorado, New Mexico, Arizona, and Utah.  These nuts are expensive whether you use the type from Europe or the United States, so if they're way out of your budget, you can leave them out.  They do add a little crunch to the stuffing, and a nice nutty flavor, so for this dish I'd say, "Blow the budget!", especially if it's for a special meal. 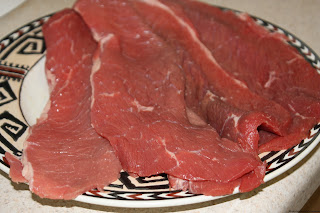 While you could buy a roast, partially freeze it and then cut the slices needed to make Braciole; most supermarkets have it available in packages, or their butcher will slice it for you. Top Round or Sirloin are my choices, and you want the slices between 1/8 of an inch to 1/4 of an inch thick for easy rolling. 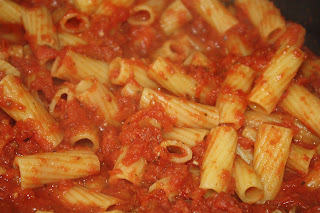 For the pasta, a tubular pasta such as rigatoni, ziti or penne goes nicely with the meat.  Cook the pasta till just about to your desired doneness; some folks like it al dente (to the tooth); some, like myself, like it softer.  Either way, finish cooking it off in the sauce while you're waiting for the Braciole to rest. 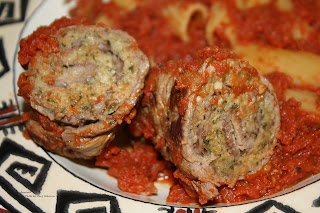 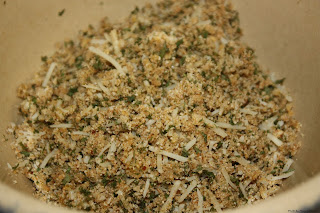 Lay out steaks on flat surface; mix together bread crumbs, cheese, parsley, pine nuts, garlic and egg in a small bowl till all ingredients are moist, yet crumbly. Evenly distribute stuffing between the four steaks, leaving one inch border all around; press stuffing down slightly. 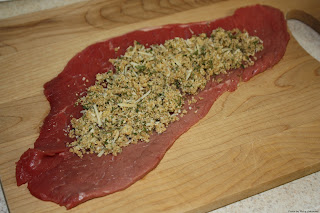 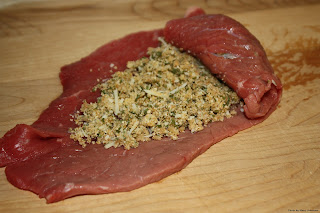 Begin at one short end and begin rolling the steak over the stuffing; work slowly to keep stuffing from falling out the sides. Using butcher’s string, carefully tie off one end; loop and tuck the string twice more around the meat roll before tying off the other end. 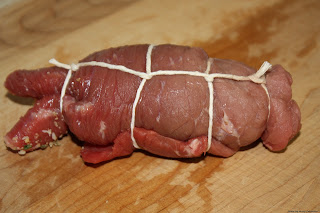 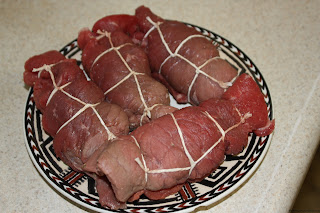 In a deep, large skillet, heat the olive oil on medium-high heat; sear the meat rolls on all sides. Reduce heat to low and pour pasta sauce over the meat rolls; cover and let simmer for two hours. 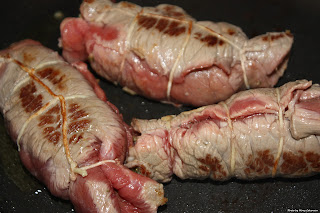 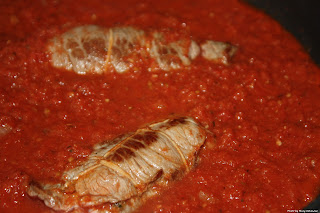 Remove meat rolls and set aside to rest. Add pasta to sauce, cover and let it finish off cooking to desired doneness. Carefully remove string from each roll; serve one meat roll with a portion of the cooked pasta and sauce.

Please remember to remove the string before serving and eating the Braciole.  Also, be very careful removing the string as the meat is extremely tender, and you don't want to accidentally break it apart with excessive manhandling.  Enjoy the adventure!

Posted by Mary Cokenour at 4:21 PM