Another boring evening of reruns, so I decided it was a good time to clean out the fridge once again. There were so many different bread products - hot dog, hamburger and sub rolls, pita pockets, English muffins and what did my wandering eye see, a forgotten loaf of Texas toast bread. Only slightly stale, therefore, still usable for some recipes: French toast, garlic toast, stuffing or something that I have wanted to make from scratch for a long while, but never got to it - Bread Pudding.

I had a few recipes, looked them all over to see what was similar and what was different, and then like Dr. Frankenstein in his lab, began to experiment. Making a vanilla sauce, so I don't want the bread pudding to be overly sweet; cut the brown sugar and granulated sugar down. Love the scent of baked items that have cinnamon, nutmeg and vanilla, so lets up that a little more. Milk is just too thin while heavy cream is too thick; I'm going with half n' half. Eureka!!! It's alive, it's alive!!! I mean, "it tastes good!, it tastes good!", and it did. The bread pudding by itself is not overly sweet, but once the vanilla sauce is poured on...perfect, not to the extent of being sickeningly sweet either.

The moral of this story is, " to conquer boredom, become creative". 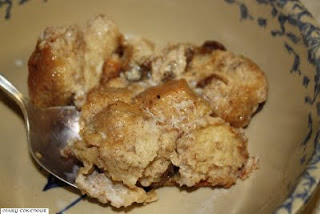 Preheat oven to 350F. Grease bottom and sides of a 1 ½ qt baking dish. Put bread cubes into dish and sprinkle raisins over top.

In a small saucepan, melt the butter in the half n’ half over medium-high heat; do not let it boil. While butter is melting, whish together brown sugar, eggs, cinnamon, nutmeg and vanilla. Slowly add in milk mixture to bowl, constantly whisking to keep eggs from scrambling. Pour this mixture over the bread and make sure to work the mixture between the bread cubes; press bread down to help it soak up liquid.

Sprinkle sugar over top; bake for 45-50 minutes; top will be browned and all liquid would have been absorbed. Serve with vanilla sauce**.

In a small saucepan, over medium heat, combine all ingredients and bring to a boil; stir occasionally while letting mixture continue to cook for 5-8 minutes to desired thickness. Pour over bread pudding.

K & A Chuckwagon looking to hit the trail.

Another local establishment is looking to sell which gives someone new the option of being a restaurant entrepreneur in Monticello, Utah.  The Chuckwagon has been a staple of Monticello for many years and seeing it close down for good would be a shame; especially in a town which has so few businesses as it is.

Currently the business is only open during the warm seasons as it is an outdoor establishment; barbequed foods and sides of beans, salads, warm bread with honey butter being the primary faire. The potential is there to build and make it an indoor/outdoor facility open all year round that is available to locals, tourists and the thousands of travelers who come through the area. So all you would be restaurateurs and entrepreneurs, this could be another notch on your belt, or your first big step.

The owners are looking to sell to the person who would agree to buy for "the right price", so anyone interested should call them at: (435) 459-4961.

Posted by Mary Cokenour at 9:53 AM 0 comments