One of my neighbors has chickens, not unusual in San Juan County; and the fresh eggs they lay are better than any purchased at a store.  The yokes are a deeper colored yellow, with a fuller richness and the whites seem to cook up fluffier.  However, due to a hole in their fencing, several of their chickens like to walk over to our front yard; pecking at goodies only a chicken seems to enjoy.  Usually they all run back home when we are outside, except one; light brown with dark brown tail feathers standing definitely clucking at us.  This one gained the name of “Dinner”, while we would never think of hurting the little devil, I like teasing it with the threat of becoming dinner.

For a long while I roasted chickens according to packaging directions; 350F for 20 minutes for each pound.  While the meat itself was moist, tender and very tasty, the skin was still pliable and fatty; we ended up pulling it off and feeding it to the pets.  Then I read a recipe where the cook roasted her chickens at 450F to 500F; the only seasoning used was salt.  The fat melted off the chicken, the skin was crispy, but she did warn that it caused a lot of splattering and smoking.  You know I had to play with this concept of roasting chicken….for dinner. 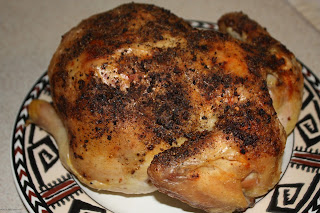 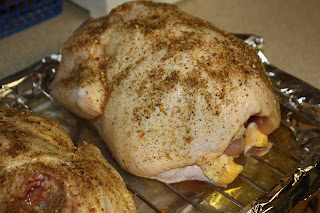 After removing the organs from the cavity (the outdoor cats truly enjoyed that treat), the chicken was washed inside and out with cold water; then sprinkled a generous amount of salt also inside and out.  Prepping the roast pan is by lining with aluminum foil; one cup of water plus one can (10.5 oz.) chicken broth poured into the pan; sprayed a rack with nonstick spray and placed it inside the pan. Why the water/broth mixture? As the fat dripped into the pan, the liquid would keep it from splattering, burning and smoking from hitting the foil straight on; and it will become the base for a great gravy.  Placing the chicken on the rack, I drizzled a few tablespoons of olive oil over the top and just allowed it to slide down over the chicken. Now I have this Organic Salt less Seasoning that I enjoy using; 21 organically grown herbs and spices ground together; a generous portion was rubbed over the outside of the chicken, knowing the oil would hold it in place.

The oven temperature had been previously set at 450F; pan inside the oven and patiently waited for the internal temperature to reach 180F.  Where it used to take 2 1/2 to 3 hours for a 5 pound bird, it now only took 1 and 1/2 hours.  The fat had dripped into the pan, the skin was crispy; yet the seasoning mixture had only browned, not burned.  The flavoring permeated the meat which was tender, moist and very juicy. Removing the chicken from the pan onto a platter, I let it rest for 15 minutes before beginning to carve it. 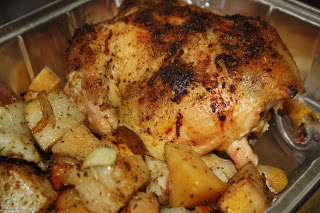 I took advantage of the high temperature setting by mixing together chunks of potato and butternut squash, slices of onion, salt, Italian seasoning blend, minced garlic and olive oil. This mixture was placed in an aluminum baking pan and put into the oven at the same time as the chicken; it finished cooking while the chicken rested (an additional 15 minutes).  Actually, I made two chickens and one was given to my mother-in-law with a generous amount of the roasted veggies; she was very pleased.

As to the smoking and splattering the other cook warned about, I experienced none of that and all because of the liquid I had put into the pan.  To make gravy, I poured the after roasting liquid into a plastic container, placed it into the freezer until the fat rose and solidified (about one hour).  At a firm, but not frozen, stage, the solid fat was scooped off; placing the liquid into a saucepan, bringing it to boil on medium-high heat, I whisked in a little flour for thickening.

There you have it, roast chicken at a higher than recommended temperature, and it is so quick, easy and extremely delicious.  Enjoy!  …and no harm has come to Dinner, it’s still pecking away at our front lawn.

No Wrong Way Touchdown with These ‘tizers.

First and ten, huddle; tension in the air as the players take the field; captain calls off numbers, “13, 9, 45…hut, hut, hut”, the ball is thrown, no…wait…hidden pass off to the running back, tight end guarding his flank down the field…..going, going…holy cow….TOUCHDOWN!!!  The crowd erupts in a roar; coach of the opposing team throws his clipboard, almost scalping a benched player.

Its football season, American fans are pumped up and excited; faces painted with team colors, jerseys of favorite players freshly washed and worn with team pride.  At the stadium, beer, hot pretzels, brats on a bun might be the typical fare to be purchased at exuberant prices.  Then there are those who planned for weeks on going to the game; tailgating parties in the parking lot.  Tables filled with platters and trays of any food imaginable; and more cooking on the grill.

The stay-at-home fans do the same type of planning; who makes the best dish to bring, and who gets stuck buying all the beer.  Neighbors bring over extra tables and chairs, no walking room, so just start passing the food.  Keep the fried onions away from Uncle Harry, you know how badly he gets gas; geez Sam, get your elbow out of my tater salad!

What we know as football today was a branch off of British rugby in 1863, and it’s come a long way since then.  Playing with no protective gear gave birth to leather helmets thin as a glove which facilitated development of stronger, heavily padded, hard shell helmets.  Talk about a contact sport, at first, football was a free for all, similar to rugby, with all team players massing on top of the poor smuck who had the ball.  Debilitating injuries, deaths forced the development of rules, regulations, formation strategies, and the roles each athlete played within the game.

Throughout American football’s history, there have been moments of drama, sadness, and hilarity.  Take, for example, the 1929 Rose Bowl game between California’s Golden Bears and Georgia Tech’s Yellow Jackets.  Midway in the 2nd quarter, Golden Bears center, Roy Riegels picks up the fumble, bounces off a Georgia Tech tackler and begins running towards the wrong goal posts.  Georgia Tech ends up with a 2-0 leads which put them in the position to win the game; and Riegels obtains the nickname, “Wrong Way”.

Now here are a few appetizer ideas for your tailgate party, and you won’t be going the wrong way with these. 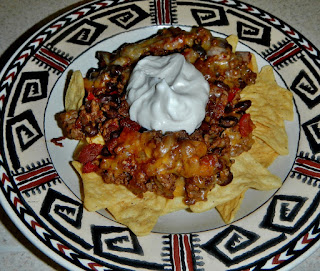 In a large skillet, medium-high heat, brown the ground beef and drain excess grease; set aside. In same skillet, sauté peppers and onions till soft, but not browned.

Note: mild, medium or hot is the cook’s option for both the diced tomatoes with chilies and the taco seasoning. 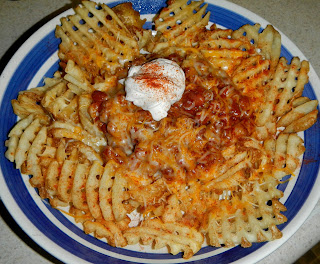 Option:  Deep fry waffle fries until golden brown, top with meat mixture, sour cream and/guacamole.  Who says nachos can only be made with tortilla chips!?! 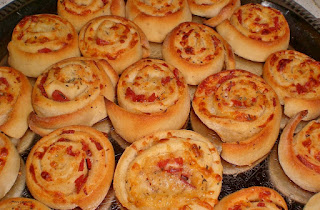 Lightly flour a wooden board and roll out the dough to a 14"x20" rectangle; mix the olive oil with the herbal mixture and lightly brush the rolled out dough. Sprinkle the cheese and pepperoni over the oiled dough. Starting at the top edge of dough, carefully begin rolling towards the bottom edge; make sure to keep the roll tight; the oil will help seal the roll. 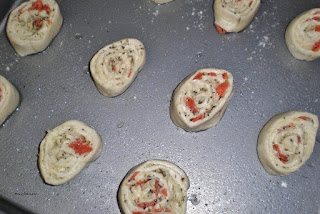 Cut off a little of the far ends of the roll; cut the roll into one inch pieces. Carefully transfer each cut piece to the jelly roll pan, cut side up. Lightly dab the herbal oil mixture, and sprinkle a little grated Parmesan cheese, onto each piece.

Bake for 15-20 minutes; until dough is golden brown. Remove to serving plate and serve with dipping sauce.

So, in the immortal words of coach, Vince Lombardi, “Football is a great deal like life in that it teaches that work, sacrifice, perseverance, competitive drive, selflessness and respect for authority is the price that each and every one of us must pay to achieve any goal that is worthwhile.”