When you want to nosh, what kind of appetizer or snack is your must have? Basic home snacks could be anything from a bag of chips, bowl of popped corn, crackers with a topping, veggies and dip, even cookies or a cupcake. If you are out at a restaurant, you might see on the menu: mozzarella sticks, cheese fries, nachos, deep fried veggies or ravioli, or chicken fingers. Been there, done that; same old, same old? Now is the time to try something very different, romantic (hey, it is Italian), yummy and healthier (I know, I know, bad word, especially around kids, but not this snack!).  Bruschetta, and while it might be a little difficult to pronounce the first time; you will not forget after you have had it.

Bruschetta (Italian pronunciation: [brus-ket-a]; American pronunciation: [bu-shetta], ignoring the “c” altogether) is an appetizer from central Italy whose origin seems to date back to the 15th century, but possibly even older than that. It was a way to use stale bread by toasting or grilling it, then enhancing the flavor by rubbing with garlic and topping with extra-virgin olive oil, salt and pepper. Variations may include toppings of spicy red pepper, tomato, vegetables, beans, cured meat, and/or cheese.  The most popular recipe, especially in America, involves basil, fresh tomato, garlic and onion, or mozzarella; similar to a snack version of Pizza Margherita.  Brushchetta can be served as an appetizer, simply enjoyed as a snack, or depending on the ingredients, and work put into it, a meal.

Grill both sides of the sliced bread; or place under a broiler for one minute, flip slices, place under broiler for another minute. Cut the cloves of garlic in half and rub cut sides over one side of bread; drizzle olive oil, sprinkle on salt. 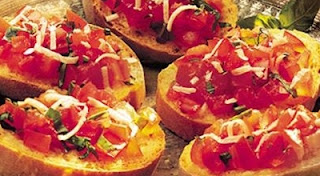 half loaf of Italian bread, cut into ½ “slices

1/8 tsp. each of salt and ground black pepper

Grill both sides of the sliced bread; or place under a broiler for one minute, flip slices, place under broiler for another minute. Smear one side of each slice with minced garlic.

1 – Shaved parmesan cheese can be placed on top of mixture.

These are the two basic appetizer/snack recipes for making bruschetta.  Now let us get to the meal versions, or should I say, my experiments in bruschetta style meals.

This recipe was published in Taste of Home Magazine, September 2007 issue. I had sent it to them way back in 1997, and then suddenly they contacted me in 2007 to say that they were going to publish it. Imagine my surprise! (https://www.tasteofhome.com/recipes/crab-bruschetta/) 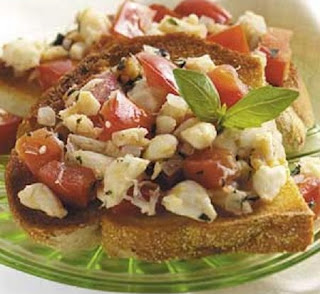 In a large skillet, sauté’ shallots and garlic in 2 tablespoons oil until tender. Add the crab, tomatoes, basil and oregano; cook and stir for 5-6 minutes or until heated through. Remove from the heat.

This next meal version I say is “bruschetta without the bread”.  Having received some eggplant, I figured I would make the same old, same old eggplant parmigiana.  Roy and I both do not like eggplant, so it gets distributed to his mom and brother, down in Moab; and Richard Watkins down in Blanding. However, a recipe that used eggplant as the top and bottom of a sandwich type appetizer/main course item, with spaghetti and sauce as the filling, appeared on my newsfeed.  While the photo looked pretty, I truly did not see the point of it; but it did get my mind going into a creative direction.

To the refrigerator I went to look for ingredients that would work with the eggplant; Roma tomatoes and mozzarella cheese, but then I spied the chicken cutlets defrosted for another recipe.  Suddenly the picture of a recipe came into my mind, like little photos, and I was off and cooking!  The eggplant would be the base ingredient, just as bread was for bruschetta; olive oil, garlic, Italian herbs, tomatoes and cheese were a given.  The chicken, however, would give the entire dish a new dimension in flavor and texture; this would be one of those recipes that could be an appetizer or a main meal.

Enough chit chat and let’s get to cooking... 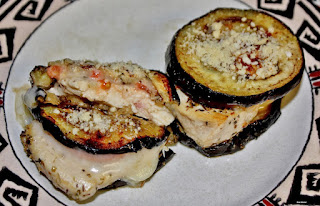 4 Tbsp. olive oil, divided in half

Line a platter or baking sheet with paper towels; lay out eggplant slices, sprinkle with salt and cover with additional paper towels.  Wait a minimum of one hour before pressing the paper towels onto the eggplant to remove excess water that has been drawn out by the salt.

Heat 2 tablespoons of oil, medium-high heat, in a large skillet; place eggplant into skillet, brown one side, turn to brown other side and sprinkle garlic powder over first browned side.  Remove to paper towels.

Build a stack: eggplant slice, chicken piece, tomato slice, cheese slice, eggplant slice.  When all stacks are made, place on the baking sheet and top with 1/2 teaspoon of grated cheese.  Bake in oven for 5 to 7 minutes to allow mozzarella cheese to melt.

Posted by Four Corners Foodie at 11:06 AM 0 comments