Within every home I have ever owned, a room was always set aside for relaxation; well my type of
relaxing at least.  A standing lamp, poufy recliner, end table, overloaded bookcases, and shelving full of houseplants; many plants hanging from the ceiling as well.  This was a personal haven, a place to read, nap and enjoy the beauty all those plants put forth.  Cacti were a fascinating addition; beautiful flowers blooming on a plant that took enjoyment from stabbing any fingers that came too close.  While the majority of houseplants needed consistent watering and maintenance; the cacti needed little to survive, especially attention.  One could almost say they were introverts and quite antisocial.

Here in the southwest, the cacti enjoy the freedom that comes from outdoor living; all that fresh air, sunshine, dry soil.  Perfect conditions for growing, thriving and becoming a staple for the Native American people who inhabited the land.  This last part was not on the to-do list of the cacti, so it is no wonder they grew long, sharp needles to deal with those human hands and fingers.  Notice, as with any living entity, I have given the cacti personality traits; survival and enjoyment being two.  I am very certain that horticulturalists and botanists are rolling eyes right out of their sockets by now. 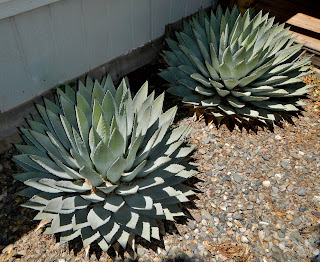 In my lifetime, I can now say that I have seen the blooming of the “Century Plant” which is often referred to as a cactus, but is actually an agave (Agave americana) which is a succulent.  The other nicknames for Agave americana are “sentry plant”, “maguey” and “American aloe”; get ready for this, it is not an aloe plant either.  This agave is native to Mexico, so it is not surprising to see it in New Mexico, Arizona and Texas.   Mormon pioneers brought it to Utah when settlements were, not politely asked, but forced to leave and resettle in the United States.

Though it is called “Century Plant”, it typically lives only 10 to 30 years; flowering only once.  This agave expends all its living energy to produce a towering 25 to 30-foot-tall stalk laden with lovely, yellow blossoms.  Suckers are produced at its base, ensuring that new plants will take hold, grow and continue the lineage.

While there are many uses for a local cactus, Prickly Pear (love the jelly and syrup products), why was the Century Plant so prized by Native Americans, and the Spanish explorers?  Within the tall stalk, and before it flowers, a sweet liquid called aguamiel (honey water) is found in the hollow center; once fermented, an alcoholic drink called pulque is produced.  The leaves of Agave americana grow 3 to 5 feet in length; the fibers called pita, can be used to make rope, matting or coarse cloth.  Found artifacts exhibited that the fibers were also used in leather embroidery; now those are tough fibers!

The yellow flowers of the agave, and their buds, need to be boiled or steamed before they can be eaten. After boiling, the flowers can be battered and deep fried, equal to those fancy battered squash blossoms at an overpriced restaurant; or diced and added to scrambled eggs, breakfast casserole, or any dish really that needs some added veggie sweetness.  Hint, remove the pollen tips before boiling the flowers as they are quite bitter.

Needless to say, this has been an interesting adventure into the knowledge regarding cactus vs. agave.  Not only did I get to delve into history a little, but botany, uses of a plant by Native American culture, and a culinary tidbit here and there.  Hope you enjoyed the journey as well.