The Challenge is...Wrap it in Bacon!

Recently I saw two friends post similar recipes on Facebook for "Bacon Wrapped, Cream Cheese Stuffed Chicken Breasts".  I looked both recipes over and basically they had one difference; while one used chopped green onion, the other used chopped jalapeno peppers.  I threw down the gauntlet, or oven mitt, and challenged myself to make this recipe more intriguing.  I thought back to the sandwich I had eaten at Sweet Cravings in Moab; how the jalapeno jelly and cream cheese had brought such great flavors to the turkey breast.  Why not do that with chicken!?!

Looking in the pantry, I found a jar of both mild and hot jalapeno jelly.  While I intended on using some green onions, I also diced up red onions and a multicolored selection of bell peppers for their natural sweetness.

﻿
The chicken breasts need to be pounded out to about 1/4 inch in thickness. Always use the flat side of your meat tenderizer, or you can purchase a flat sided mallet. Do not use the mallet directly on the chicken; place it inside a plastic bag, or between 2 sheets of plastic wrap. Also, placing a clean linen towel over the plastic will most definitely ensure that the tender poultry meat will not shred, but extend out smoothly.  Gently pound out the chicken to the desired thickness; this is not the type of meat to take your aggressions out on.

After pounding out the chicken, spread one tablespoon of the mild jelly (green) or the hot jelly (red); leaving about a half inch border from the edges.

A tablespoon of cream cheese was spread on next; in the other recipes, only two tablespoons of cream cheese was used for the stuffing.  I pressed about two tablespoons of the bell peppers with red onions, only green onions, or bell peppers with green onions into the cream cheese.
﻿
Now you might be wondering why no salt sprinkled over the chicken; the bacon is going to take care of the salt issue.  Also, in the recipes I read, they called for the bacon to be partially cooked before wrapping around the chicken.  I used totally raw bacon as I wanted it to be pliable enough to fully wrap around the rolled breasts; also to allow the fat to baste the chicken and keep it moist as the bacon began to crisp up in the oven.  I used a roasting pan with a rack which allowed the bacon to crisp up on the bottom as well as the top, so no need for a broiler later on.  Preheat the oven to 400F; line the roasting pan with aluminum foil and add two cups of water to keep any bacon drippings from burning and smoking.  Spray the rack with nonstick spray and place back inside the pan.  Now for the chicken rolling...

Lay two slices of bacon on your board, about one inch apart, and carefully lay the rolled breast with the first bacon slice's seam facing upward.  Wrap those two slices around the chicken and let the ends come together to form a seal.

Carefully pick up the bundle and lay it, bacon seams side down, on the roasting rack.  Leave about an inch in between each bundle, so the bacon can crisp up on all sides.  Place the roasting pan inside the oven and let it cook for 40-45 minutes; until the internal temperature reaches 165F. 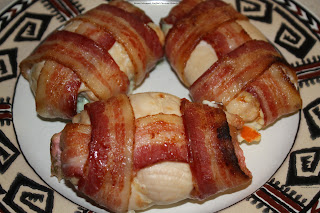 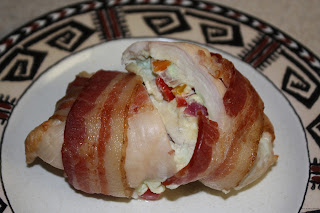 There you have it, Bacon Wrapped Stuffed Chicken Breasts.  The jalapeno jelly and cream cheese mixture combined to form a decadent stuffing which enhanced the natural sweetness of the bell peppers and red onions.  With the green onions, they combined with the jalapeno jelly to give that Southwestern flavor sensation.   The bacon kept the chicken moist, yet seasoned it at the same time.