Tetrazzini is strictly Italian, that is if you're the opera singer Luisa Tetrazzini who had a recipe created for her back in the early 1900's.  While Tetrazzini enjoyed a lavish career from 1890 to 1920; her life ended in poor health and poverty.  Now two sources claim to be the creators of this recipe named after the famous opera star, the Palace Hotel in San Francisco, CA and the Knickerbocker Hotel in New York, NY.  Just another version of the West coast versus the East coast; but whoever invented it, I bet, didn't foresee the casserole becoming such a hit with the home cook.

Basically, Tetrazzini is a casserole made with some type of cooked poultry, canned tuna or raw shrimp which is mixed with diced vegetables, cooked spaghetti and baked together in a luscious, buttery cream sauce.  It's one of those recipes that can incorporate all the food groups in one sitting; if you add diced tomatoes, well there's your fruit group right there.  One thing I know for certain, there will be no leftovers for this casserole. 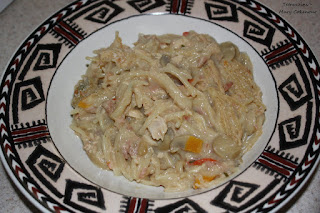 Make a roux by melting 3 Tbsp butter, on high heat in a large saucepan; whisk in flour until smooth. It is important to keep whisking, or roux will burn; and the process will have to be started over. Continue whisking while adding chicken broth; sauce will thicken. Whisk in cream, sherry, cheese and black pepper; remove from heat when mixture is smooth.

In a small nonstick skillet, on high heat, melt 2 Tbsp butter; sauté mushrooms and onions until softened; about three minutes.

**Options: Use the equivalent of cooked chicken, canned tuna or shrimp (raw, peeled and deveined)