Don't throw that sauce away!

Did you ever make a recipe that centered around some type of sauce or gravy? Did you ever have a lot left over, but didn't know what to do with it, so threw it out? At the time you probably thought, "what I am going to do with this; it's not like I'm going to use it again." Why not? Granted, sauces and gravies that have dairy in them will not freeze well and when reheated will separate and/or curdle. Not so with freshly made pasta sauces chock full of tomatoes and other vegetables; even if it's only as little as 2 cups worth. They freeze well and can be reheated easily for use as is, or incorporated into other recipes.

Take for example my recipe for Chicken Cacciatore; guaranteed there will always be extra sauce left over and I freeze it for future use. I might use it to create Chicken Cacciatore again; or do a simplfied quickie version. Today was one of those "I need something" quick days and it only took 3 main ingredients, plus a little olive oil and garlic.

First I put on a large pot of salted water, high heat,to bring to a boil. That was for the 1 lb bag of frozen cheese tortellini I was going to make. Secondly, I cut up 4 boneless, skinless chicken breasts halves into bite sized pieces and sprinkled a tablespoon of fine sea salt over the pieces. On the stove I had ready a large skillet with 3 Tbsp of olive oil and 1 Tbsp of minced garlic which was heating on medium heat. The chicken went into the skillet to brown in the oil/garlic mixture.

Big deal you might be saying, so how is this all going to come together for something simple and tasty? What I had waiting on the side was a 2 cup container of leftover chicken cacciatore sauce which I had defrosted overnight. Ok, chicken is nicely browned in the skillet; tortellini is floating in the water; strain the pasta and put it into the skillet; add the sauce and let it all cook together for 10 mintues. 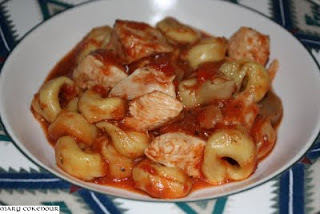 Four servings of absolute deliciousness; and took just a little effort. Between the prep work and the actual cooking; about 30 minutes; not bad I'd say. So next time you have a couple of cups of sauce left over, don't throw it out because it just might make that quickie skillet dinner you just needed to make.