After reading many reviews online, I was a bit hesitant about having a meal in this local establishment. However, I wouldn't be very useful at restaurant reviews if I just went by what others wrote. Camera and reading material in bag, off to R & F I went to get my own conclusions.

As I was walking up to R & F's door, I was greeted cheerily by employees standing outside; and even had the door opened for me. My hostess and waitress was Fana; and if you want to feel like a little kid in grandma's kitchen, she'll oblige you with a smile. Now I could have been a tourist passing through or a local dining alone, the employees there didn't know, but they treated me very, very well. 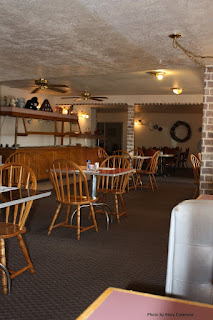 The interior is reminiscent of an old time country kitchen and that decor is intentional; just like the feeling of being in grandma's kitchen. The entire place is clean and that includes the kitchen area which I was allowed to visit. R & F is open 7 days a week for breakfast, lunch and dinner; 90% of the menu items are house made. 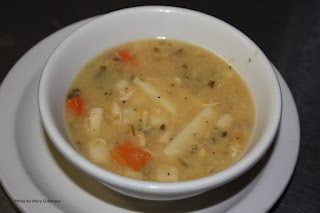 For dinner, I chose the Chicken Strips which came with a choice of potato, vegetable of the day and a cup of soup or a salad. I tried the soup of the day which was Chicken Noodle. A savory seasoned thick broth with old fashioned noodles, carrots and shredded chicken; a real stick to your ribs kind of soup. Just writing about it is making me crave more. 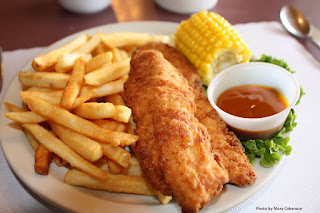 The chicken strips are coated in a mixture of flour and cornmeal; then deep fried to a crispy golden brown. At a half inch thick, the chicken was tender and juicy; it came with a spicy bbq sauce on the side, but you didn't really need it. The fries were crispy on the outside, fluffy inside and piping hot. The corn on the cob was hot, sweet and a perfect side for what I had ordered. No dessert for me; the meal I had just eaten was just right.

R & F is on Route 491 as you are going to or coming from Colorado; and if you're hungry, make sure to stop on in. There are many hotels and motels in Monticello, Utah and I hope they're giving their guests a hint about R & F. Oh, and if you're there on a Wednesday, stop on in for Mexican night; we're talking authentic Mexican cuisine. Whether you're a tourist or trucker passing through, or one of the locals; you'll feel welcomed comfort at R & F.