The Many Ways of a Traditional Comfort Food – Chicken Pot Pie

For generations, the pot pie has been a comfort food staple for many a family.  Whether it was made with chicken, beef, pork, seafood or simply vegetarian; the family ate well on a cold winter’s night.  Made from scratch, fresh or leftover meats, and vegetables, were encased in a crust, and then baked in an oven with a hearty simmering sauce.


The typical crust is the pie crust, browned and flaky with sauce oozing from slits made in the crust to help release steam.  However, many a recipe will replace the pie crust with biscuit dough, cornbread, or dumplings.  I, myself, experiment with various forms of dough, and have found that French bread dough gives the pot pie a very rustic flavor.
The Amish and Mennonite of Lancaster County, Pennsylvania have a recipe for chicken pot pie which is not baked, but made in, as the name suggests, a pot.  Instead of a pie or bread topping, thick pasta squares are cooked in the sauce with the chicken and vegetables.  While these can be freshly homemade, they can also be purchased pre-made and dried; both methods work just as well. 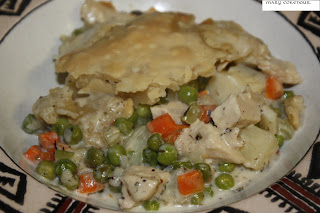 In a saucepan, combine chicken, carrots and peas.  Add water to cover and boil for 15 minutes. Remove from heat, drain and set aside.  In a separate saucepan, cook potatoes until fork tender, drain; add to drained chicken and vegetables.

In the saucepan over medium heat, sauté’ onions and celery in butter until soft and translucent. Stir in flour, salt, pepper, paprika and thyme.  Slowly stir in chicken broth and milk. Simmer over medium-low heat until thick. Remove from heat and set aside.

Place the chicken/veggie mixture in bottom of a 1 ½ quart baking dish. Pour hot liquid mixture over. Cover with pie crust; crimp edge around dish.  Make several small slits in the top to allow steam to escape.

Bake in the preheated oven for 30 to 35 minutes, or until pastry is golden brown and filling is
bubbly. Cool for 10 minutes before serving. 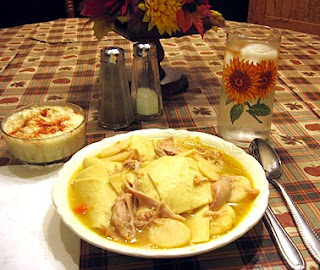 Preparation -
Mix the flour, egg, and shortening together. Knead this dough mixture, while alternately adding small amounts of water until the dough holds together well. Divide the dough into two or three pieces. Roll each piece to about 1/8" thick on a floured board. Cut the rolled out dough into squares - about 2 inches to 2-1/2 inches wide. Allow the freshly made pot pie noodle squares to dry for about 30 minutes or more before cooking.

The Stew
Three to four cups of shredded chicken or turkey leftovers can be used instead of a whole stewing chicken for this recipe. When using leftovers, use chicken broth instead of the 2 quarts water. With leftover chicken or turkey. I use about 4 cans of chicken broth, such as College Inn® Broth.
·  1 - 3 lb. stewing chicken
·  2 quarts water
·  5 medium potatoes - peeled and cut into bite size chunks
·  2 cups chopped celery
·  1 small onion - chopped
·  1/2 cup finely diced carrots
·  1 T. dried parsley
·  1 tsp. salt
·  1/2 tsp. pepper
Preparation -
Cook the chicken in water until tender. Remove the chicken from the broth and separate the meat from the bones and skin. Cut or shred the cooked chicken into bite size pieces. Meanwhile, add the vegetables and seasonings to the simmering broth. Cook for about 15 to 20 minutes, then add the pot pie squares to the broth mixture, a few at a time, stirring frequently so they don't stick together. After all have been added, cook gently for about 6 to 8 minutes or until the noodles are tender.
Add the cut up chicken and cook over low heat, stirring occasionally for 10 to 15 minutes longer. Cover, and let stand for a few minutes before serving.