Father’s Day, the celebration of a supreme male influence whether by birthright, adoption, remarriage, mentoring; or some other loving relationship in which a male figure is looked upon as a father.  It does NOT have to be by blood alone; sometimes the bond of, what some call “water” can be stronger than blood.  Nowadays the term “baby daddy” has various connotations; a man who proudly helps create a child he cherishes and cares for; or a man who is simply a sperm donor having no concern over the child or even the woman who carried  the baby.  I, however, still say that “anyone can be a father, it takes a special man to step up and be a daddy”.  Personally, I never knew my father; he went off to marry another woman, create three children with her, and never have any interaction with me.  Father’s Day, father/daughter dances, a powerful male influence and protector were for other little girls.  I don’t feel sorry for myself, I feel sorry for him; the loss of me and the wonderful woman I have become.
A little history on Father’s Day; it was not an official holiday in the United States until 1972 when President Richard Nixon proclaimed it a holiday by law.  From 1908 until 1972, many attempts were made, but “Tricky Dicky” is the one who made it stick.  However, in Middle Ages, primarily Catholic, Europe, it was celebrated each year on March 19th (St. Joseph’s Day).  St. Joseph was viewed as the fatherly Nutritor Domini ("Nourisher of the Lord") or "the putative father of Jesus".  Nowadays, over 40 countries worldwide celebrate a Father’s Day, but its date could well be anytime from January through December.

Luckily, to justify the recipes I’ll be giving you; Greece just happens to celebrate on the same day as the United States does.  So, in honor of Zeus, and all the dads out there; let’s get them to the Greek! 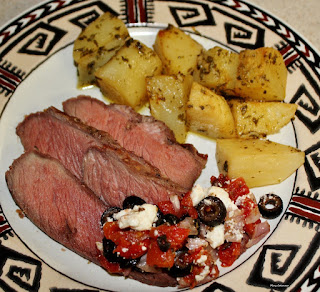 In a small bowl, whisk together half each of basil and oregano; the garlic, olive oil, vinegar and lemon juice.  Before placing the meat inside a resealable plastic bag, lightly score both sides with a sharp knife diagonally against the grain.  This will allow the marinade to seep more easily into the meat, and can be used as a guide for slicing later on.  Pour the marinade over the meat, massage it onto the meat, seal the bag and refrigerate for two hours; after one hour, turn bag over. 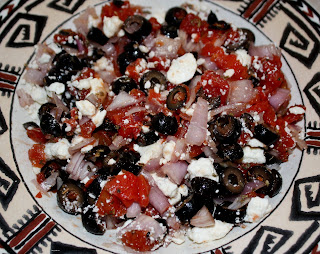 ﻿Also after one hour, prepare the "salsa" by lightly combining the tomatoes, shallot, olives and remaining half teaspoon of the basil and oregano; cover with plastic wrap and refrigerate.   Add the feta cheese to the mixture just before serving with the meat and potatoes. 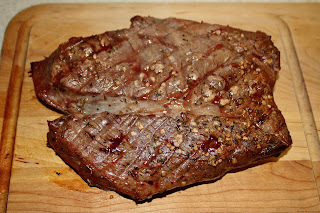 Line a roasting pan with aluminum foil, spray the rack with nonstick spray and insert into the pan.  Take the meat out of the bag (discard the bag and excess marinade), place on the rack and place the pan on the center rack inside the oven.  After 20 minutes, turn the roast over; after 15 minutes the meat will be rare, 20 minutes for medium-rare.  Remove to a cutting board and let it rest for 5-7 minutes to allow its juices to settle within itself before slicing; slice against the grain and thinly.  Serve with the Greek "salsa". 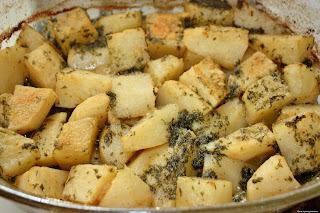 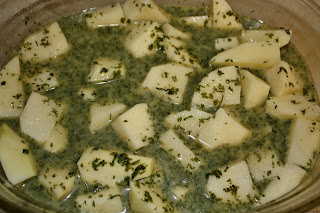 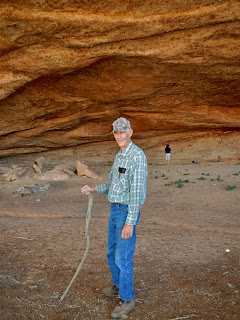 There you have it, my Greek Inspired London Broil and Lemon-Parsley Potatoes with a Parmesan Cheese Crust.  Believe me, leftovers will be slim to none.  Enjoy, Happy Father’s Day to you and yours, and Happy Father’s Day to Bishop Richard Watkins of Blanding who adopted my husband, Roy, and me as his own children.  Love you dad!