“Things falling apart is a kind of testing and also a kind of healing. We think that the point is to pass the test or to overcome the problem, but the truth is that things don’t really get solved. They come together and they fall apart. Then they come together again and fall apart again. It’s just like that. The healing comes from letting there be room for all of this to happen: room for grief, for relief, for misery, for joy.” ~Pema Chödrön

This quote describes life in general, does it not?  A day, in the life, of any individual has ups and downs; some expected, some a complete surprise.  Through most of 2021, the Cokenour household coasted through the year.  In October though, we lost our 11 year old Australian Shepherd dog, Tippy.  11 years of having our “big puppy”, and suddenly he was gone; a victim of cancer that had ravaged his body.  Where had 11 years gone?  How had we missed his getting older, when he constantly acted like a young puppy!?!   Then, in November, we lost our Maine Coon cat, Monkey; 15 years old and the last of our pets from our life in Pennsylvania.  To say the Yule and Christmas holidays were swallowed up in sadness would be an overwhelming truth.

As good as 2021 had been for us, it had no intention of letting us get away with an almost completely happy year.  But that is life in reality, full of ups, downs and all-arounds that have your heart, mind and soul permanently strapped into a Tilt-a-World ride.

Now here it is, the New Year, 2022; and still no flying cars as depicted in the cartoon series, The Jetsons.  Hello 2022, what new adventures will you be flinging our way?  That is correct, we will be welcoming the New Year with open arms, eyes and mind.  Taking whatever lessons the past year has ingrained within us, taking this new bull by the horns, and riding till our butts are thrown upon the ground.  Give up?  You do not know us very well then.  Oh no, we dust ourselves off, look that bull in the eyes and say, “Bring it on!”  So, to all of you who have had it bad, and wonder if life is worth going on, we say, “Yes it is, so get on your own bulls and ride!”

When it comes to cooking, many households, throughout the world, welcome the New Year with a specialty menu.  It is geared towards filling the senses with happiness, and bestowing luck onto all who partake of the meal. Of course, while New Year’s Eve is geared more towards the consumption of alcohol (what better way to forget the old year?), the Day might be geared towards relieving a hangover.  You do you, right?

Back to food, and wondering how the pioneers, of Utah, celebrated the New Year.  Reading through The Mormon Pioneer Cookbook, I discovered there were two versions; one British and the other Swedish.  Since we enjoy British recipes, this is what I focused on more.  New Year was full of music, drama, dancing; celebrating the accomplishments of the past year such as building homes and good harvests.  In 1852, Social Hall was built in Salt Lake City, and was reputed to be the first theater built, west of the Missouri River.  It became the center for all social activities in the ever expanding Mormon community.  For New Year’s Eve, a late supper (British menu) was held, dancing till dawn, and then breakfast (Swedish menu) served.  The meals were buffet style, with households preparing and bringing all the dishes to share.  The late supper consisted of Irish Soda Bread, pork pies, Cornish pasties, Wassail (a hot cider drink full of citrus) and Scottish Shortbread; amongst other homemade and delicious foods of British Isle descent. 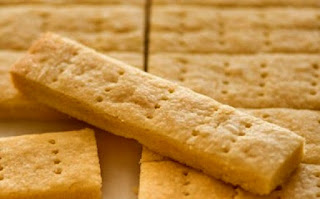 Scottish Shortbread is a simple recipe containing three ingredients: sugar, butter and flour.  Traditionally it is baked in a rectangle shape, and then cut into rectangular “fingers”.  It is considered to be a biscuit, but has been described as a cookie, due to its shape being changed by manufacturers.  Think of shortbread as Scotland’s version of Italian biscotti.  Sometimes a simple design would be pressed into the shortbread, before baking, with a cookie stamp; or holes indented with the tines of a fork.  Eaten by itself, or smeared with a fruit jelly or curd, and the New Year will start off being very happy indeed! 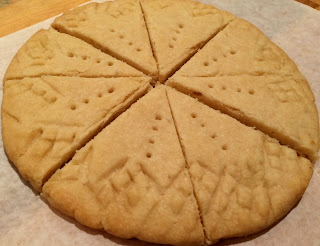 (The Mormon Pioneer Cookbook by Daughters of Utah Pioneers, page 62)

Cream together butter and sugar until light and fluffy.  Gradually blend in flour, mix well.  Chill.

Divide dough in half.  Press into two 6-inch rounds on a lightly greased baking sheet.  Prick tops with tines of fork.  If desired, flute edges.

Bake in a 300F oven about 30 minutes or until delicately browned.

Cut each into 8 segments while hot.

So, for 2022, I have been thinking to start the New Year with a bit o’ beef, Yorkshire pudding, gravy, new potatoes baked in butter, and, of course, Scottish shortbread for dessert.

From the Cokenour family to you and yours, Happy New Year!!!