“Come on, shake your body, baby, do the conga.

I know you can't control yourself any longer.

Come on, shake your body, baby, do the conga.

I know you can't control yourself any longer.”

Here we are, the end of August and the official start of autumn is less than a month away.  Fall Equinox, aka Mabon, will be on September 22nd, and it will also be the celebration of the second harvest.  Colder temperatures will be moving in, and those vegetable plants that need more heat will be giving up their final gifts.

Our jalapeno and Roma tomato plants were full and ready for the picking, a lovely abundance of green and red.  Would I be making pasta sauce with those tomatoes this year?  Sadly no, as the tomato plants were not as fruitful as gallons of sauce would require.  However, those jalapeno peppers were screaming at me, “Don’t you want your taste buds to dance with us?”

Who was I to argue with hot peppers, so being agreeable, I pulled out salt, garlic, onions, cilantro and lime juice to join the conga line.  It was salsa making time!

What is salsa, and who invented it first.  Salsa is typically, in our modern world, a combination of chopped, diced, minced tomatoes, onions, garlic and peppers with seasonings added for flavor boosting.  However, when the Spanish invaded…. umm, discovered and explored, Mexico and Central America, the recipe consisted of tomatoes, chile peppers and squash seeds.  While we think of salsa being a traditional Mexican dish, it can be traced back to the Aztecs, Incas and Mayans.  The Maya were native people of Mexico and Central America, while the Aztec were located mainly in northern Mesoamerica (today’s countries of northern Costa Rica, Nicaragua, Honduras, El Salvador, Guatemala, Belize, and central to southern Mexico) between 1345 and 1521 BCE.  The Inca lived in ancient Peru between 1400 and 1533 BCE, and extended across western South America.  Then the Spanish came in the 1500s, and changed up, not just life and culture, but the native cuisines.

The overall flavor of salsa is dependent, not just upon ingredients used, but how it is created; raw or cooked.  Then there is the chile peppers used, each having its own discernible flavor, and heat intensity, which can also be changed via drying or cooking.  The peppers get their heat primarily from the seeds, so keeping them in the recipe will gauge mild to medium to hot.  When I make salsa, for a two-cup recipe, usually one large jalapeno with seeds and white pith (aka ribs) removed.  The heat of the pepper tingles the lips, and the edges of the tongue; however, full flavor of the tomatoes, onions and garlic are front and center.  That is how we like it, and dicing and mincing via knife skills, creates a chunky, not watered down, mixture.

Have I purchased jarred salsa off the market shelf?  Sure have, but I drain the contents, saving the juice for when I make enchilada sauce.  Chunky salsa plus starter for enchilada sauce; sounds like a win-win situation for me.  Of course, homemade salsa does not contain the preservatives that store bought must have to avoid spoilage.  So, when making a large batch, have in mind how to store; canning or freezing.  Be aware that the water content of tomatoes will affect the salsa by breaking down the texture of the tomatoes.  That is why I like using Roma tomatoes, for sauce and salsa, as they are meatier, have less seeds and less water content.

Salsa is a trifecta of dip, condiment or snack/meal that will make your taste buds dance.  Might as well put on some music, and have your entire body dance to the rhythm as well. 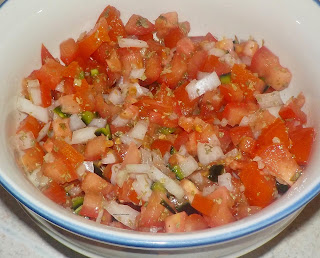 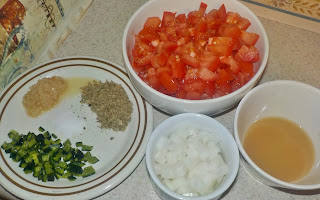 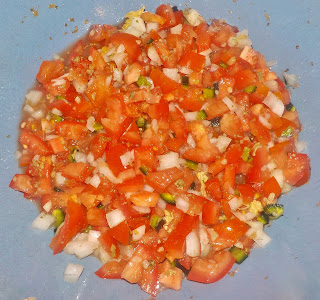 In large bowl, mix all ingredients together.  Let settle for 15 minutes; mix again before serving.

Place in airtight container, or freezer bag pressing out as much air as possible.

Water content in the tomatoes can break down texture, so use within two months; except if using Roma tomatoes, then three months. 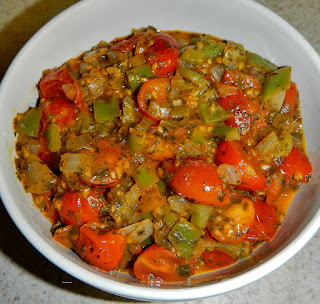 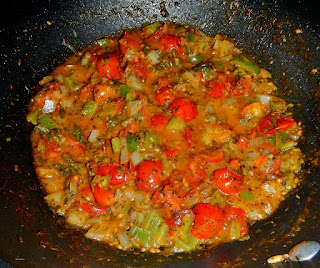 In a medium skillet, or small Wok, heat oil on medium heat; add tomatoes and cook for five minutes to release juice from the tomatoes. 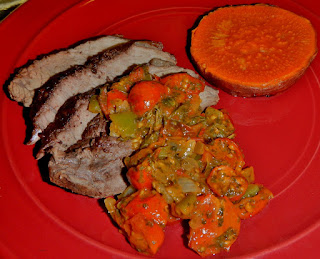 Use as garnish for meat, pork or chicken; use as dip or condiment.