Growing up, there were basically only two ways we ate Schnitzel.  The first was a thin veal cutlet fried in bread crumbs and served with a side of fried potatoes and vegetables.  The second was what I would equate to Italian style which is veal parmigiana; thin veal cutlet fried in bread crumbs, covered in tomato sauce and cheese, served with a side of pasta.  Doing research for this blog post, I found there was half a world of different styles, and all originating in Europe, Russia or Scandinavia.  For the sake of my own sanity, and not to bore you all senseless, I'm only going to deal with three styles: Wiener Schnitzel and Jager Schnitzel (both from Germany) and Becki odrezak (Croatia). 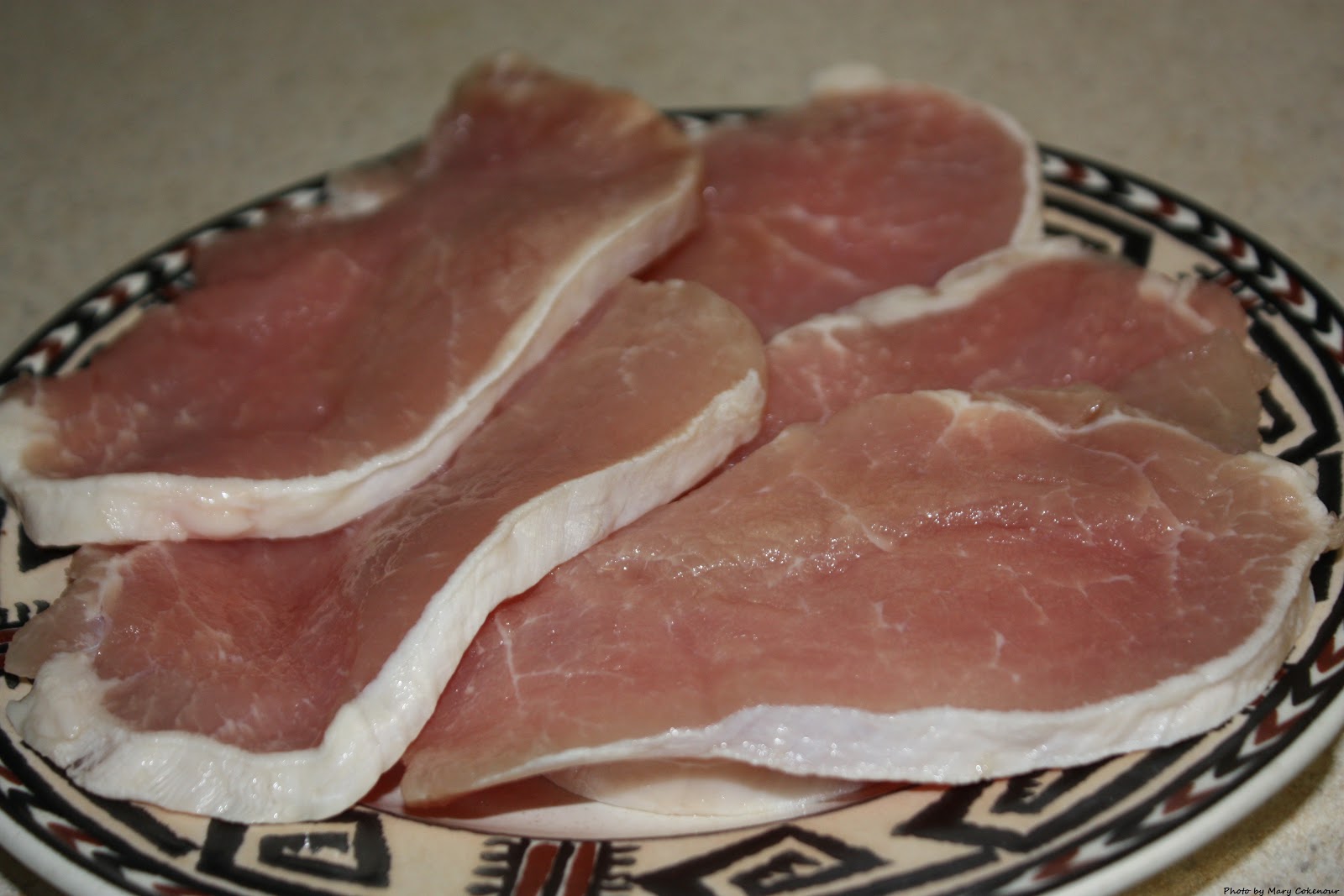 Schnitzel is essentially made with a meat product such as veal, beef, pork or wild game (elk, deer, wild boar).  The meat is sliced thin into cutlets, anywhere to 1/4 to 1/2 of an inch in thickness; then pounded out to 1/8 or 1/4 inch in thickness.  Leave a little fat around the meat; during deep frying some of the fat will melt and keep the meat moist and juicy; the rest will crisp up.   In the United States, Country Fried Steak could be looked at as a form of Schnitzel; a cutlet of beef which is only slightly pounded out, but left thick, and fried in bread crumbs. 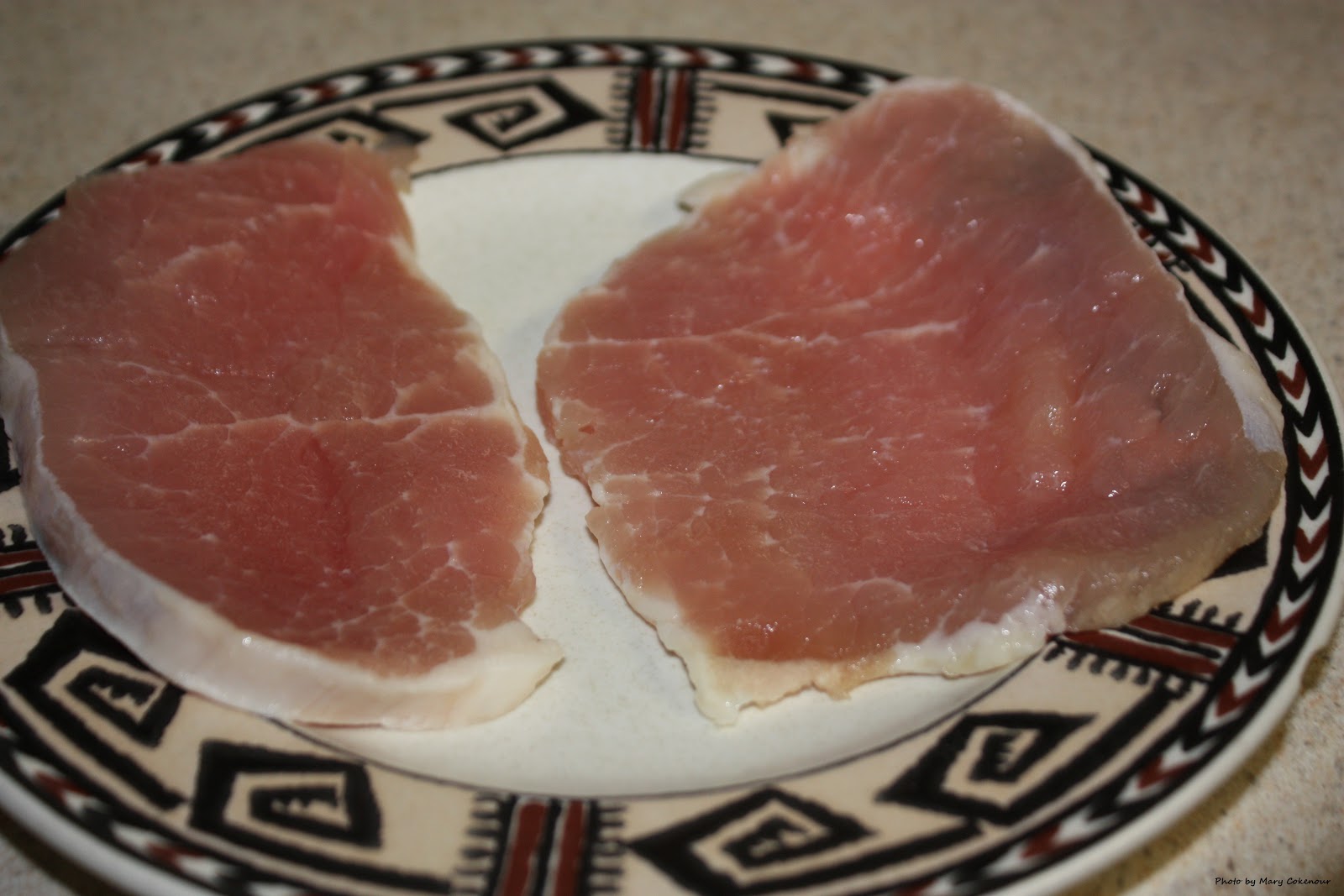 Pounding out the meat breaks up any connective tissues and fibers, so the finished product will be very, very tender.  Use the flat side of a meat tenderizer as you want to flatten out the meat to almost double its original size, but not to the point of being able to read a newspaper through it, or shredding the meat itself.  Tenderizing meat is great for getting out frustrations, but don't think of anything too maddening; you want to flatten out, not annihilate.

Now I'll give you a basic recipe for making the Schnitzel and it works for whichever meat you choose to use. 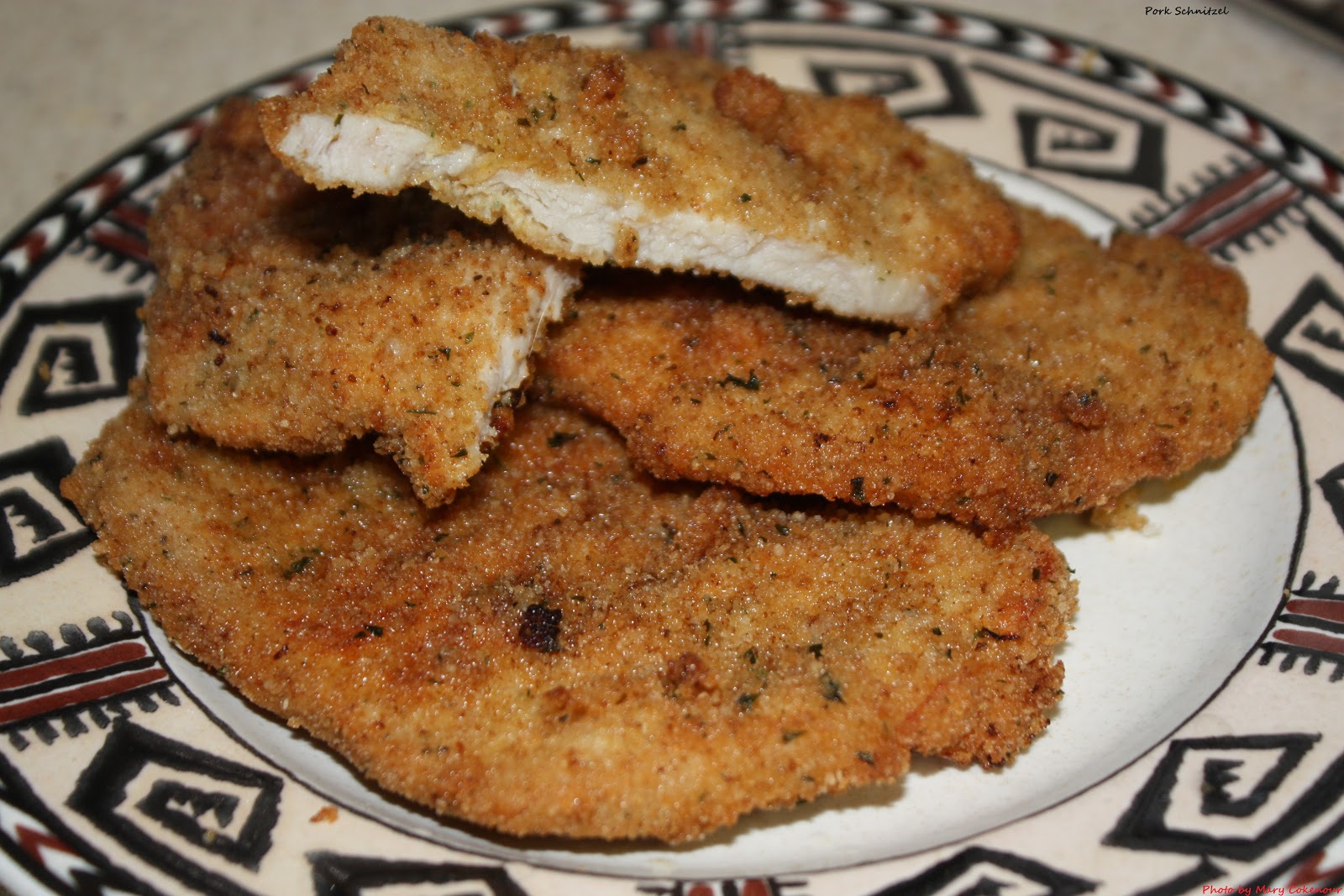 So here is your basic recipe for whichever country's Schnitzel you want to visit next. 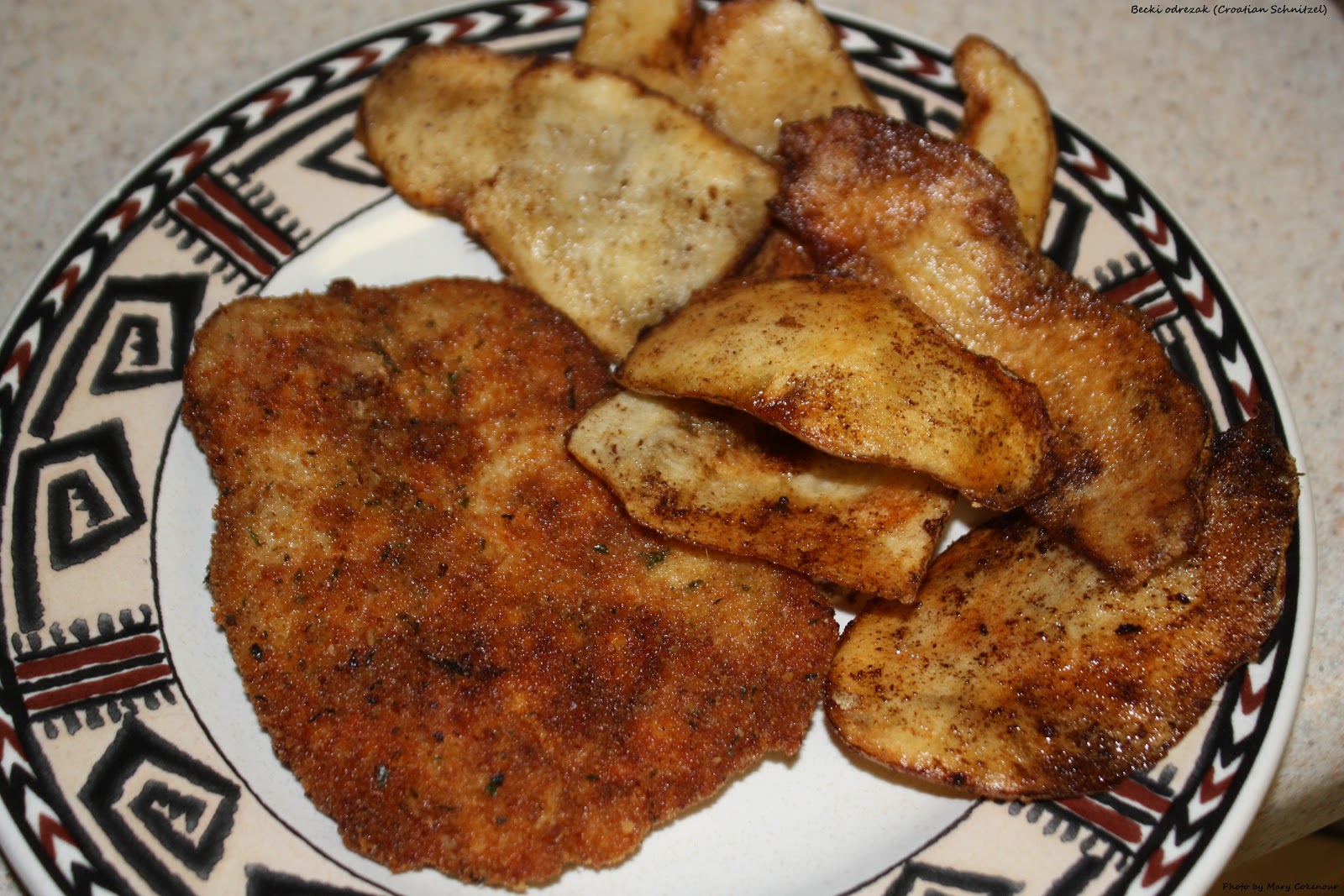 I'm going to Croatia first, since that is the land of my ancestry.  Remember when I said above that I ate Schnitzel with fried potatoes; since the meat was being deep fried; throwing some potatoes into that oil to make a side dish was the norm.

Now when you think of Schnitzel from Germany, two versions come to mind.  The first is the popularly known Wiener Schnitzel; a fried veal cutlet with a sunnyside egg on top. A teaspoon of melted butter in an eight inch skillet over medium-high heat; carefully drop in your raw egg as to not break the yoke; season with a dash of salt and pepper.   Use a spatula to move around the white and clear liquids of the egg, so they will cook thoroughly around the yoke.  Carefully place it over the cutlet; when you cut into that yoke and down into the cutlet, the yoke will become a rich sauce for the fried meat. 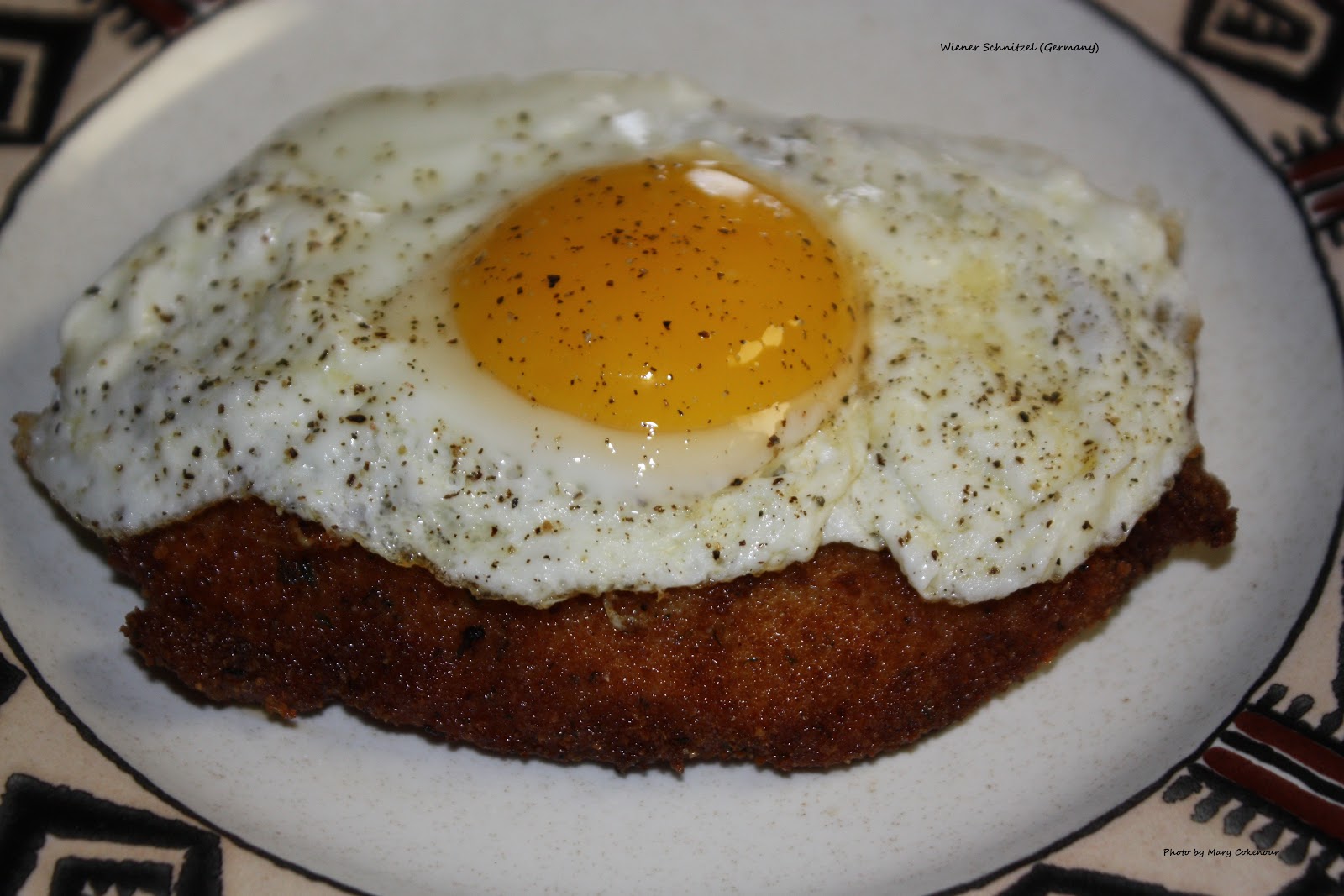 The second version is Jager Schnitzel, or "Hunter's Schnitzel", which is done up normally with pork. I'm suspecting this name of "Hunter's" alludes to the hunting of wild game such as boar. This dish is served with a creamy mushroom sauce. 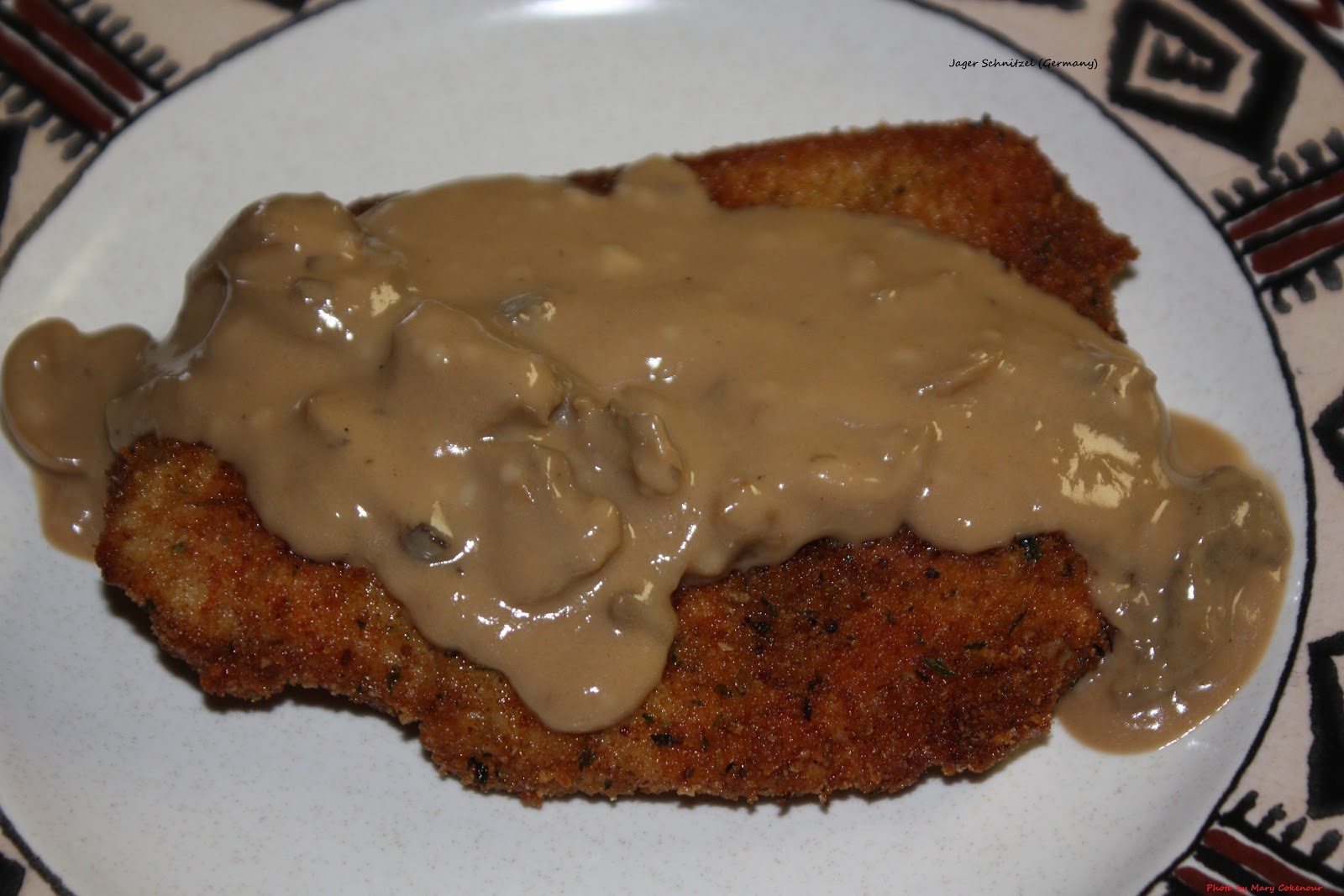 In a deep 10 inch skillet, heat oil on medium heat and saute mushrooms for 5 minutes; add beef stock and simmer for 20 minutes.  Stir occasionally to keep from boiling.  Reduce heat to low; whisk in cornstarch and sour cream.  Continue to whisk until sauce thickens; serve over fried cutlets.

Posted by Mary Cokenour at 9:12 AM 2 comments