Play with it and it will taste better.

Way back on January 20, 2011 I posted the recipe for a traditional Utah recipe, Funeral Potatoes. Not having the orange variety of Cheddar cheese, cornflakes or fresh potatoes available, and being too lazy to go to the store, I decided to try a few other ingredients and see what I could come up with. I must say, it was a very tasty experiment. 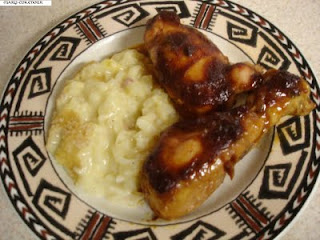 Put the potatoes into a large bowl, pour the cheese mixture in and mix thoroughly. Pour this mixture into a 2 qt baking dish (sprayed with nonstick cooking spray); cover with plastic wrap and refrigerate overnight.

Next day, remove from refrigerator and let it sit on counter for a half hour. Preheat oven to 350F; remove plastic wrap, sprinkle plain dried bread crumbs over top, cover with aluminum foil and bake for one hour. Remove foil, bake additional 15 minutes; let rest for 10 minutes before serving.