Being Bananas and Nuts Can Be Fulfilling.

Groucho Marx, A Night at the Opera

Ah, the Marx Brothers, four brothers (Groucho, Chico, Harpo and Zeppo) who made five hilarious movies together, before Zeppo decided that his life’s goal was to be a successful businessman.  Although the other three brothers continued on to make more movies, it was only Groucho who continued on, into radio and television, with his show, “You Bet Your Life”.

The banana, and its peel, was often used as a gag in movies; who has not seen the classic slipping on the banana peel fall?  In Horse Feathers, Chico and Harpo throw banana peels across a football field, slowing down the opposing team as they slipped and fell.  In Duck Soup, Harpo is so busy chowing down on a banana, he successfully does not get married, due to not being able to say his vows.

There is something to be said about the old comedy classics such as the Marx Brothers, Abbott and Costello, Laurel and Hardy, Bowery Boys and the Little Rascals, to name a few.  Their movies and shows were done during hardship eras of the United States; bringing joyous laughter to help forget the sorrows, even if for a short time.  Still having difficulty dealing with the pandemic?  Have a laugh fest night watching these old comedies; belly laughs always feel better than belly aches.

Which brings me to, “Fruits and nuts were comparing themselves one day.  Cauliflower and Walnut said, “We look like brains, so are very smart.”  Broccoli said, “I look like a tree, so am sturdy and strong.”  Banana said, “Nevermind, can we change the subject.””  So yes, bananas can be compared to fingers (I bet you thought I was going to say something else), and that is exactly why they are called bananas.  Arabs adopted the name banan, the Arabic word for finger; bananas grow in hands, or what we call bunches, and were smaller in size.

Bananas are packed with potassium, B6 (great for brain nourishment) and 12% of daily fiber; however, also contain mega-carbohydrates and natural sugar.  High amounts of ethylene cause the yellow pigments in banana skins to decay into brown spots, a process called enzymatic browning.  Wrapping the stems in plastic, or hanging them by the stem and away from other fruits, can slow the browning process.  Peel the bananas, sprinkle lemon juice on them, and then pop them into the refrigerator to keep the “meat” from browning too quickly.  Or, take the whole bananas (minus peels), wrap in plastic and pop into the freezer individually; think of it as a banana popsicle.  Personally, after the peels begin to brown, I mush the banana pulp up, measure out into one cup portions, wrap in plastic, freeze and save for baking.

One of our favorite baked good is either banana nut muffins or breads.  I enjoy trying out new recipes which have options of using different nuts, or added in fruits like cranberries or blueberries.  One recipe I tried added in lemon juice, and the breads came out very sour tasting, so I do not recommend that.  The recipe made three breads, and I shared two with the tasters agreeing with our assessment, just too sour.

Now, of course, the addition of white and brown sugars is going to up the carbs, so consider using baking sugar substitutes like Truvia and Swerve.  I have even used these products for cookies, pies, cakes, even cheesecakes, and no one could tell I did not use real sugar!   Swerve even has a substitute for confectioner’s (powdered) sugar which tastes authentic; and neither brand has a bitter aftertaste. 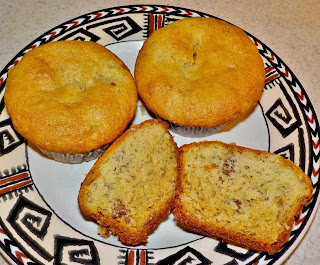 In another bowl, combine flour, baking soda, baking powder and walnuts.  Add to banana mixture; stir just until moist.  Do not overmix.

I doubled up on this recipe to make 12 muffins, and used brown sugar to give the muffins a rich, darker coloring. 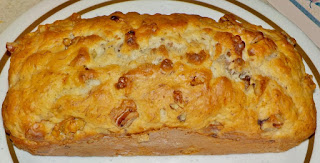 With the bread, this recipe can make one loaf, and if using white sugar, the interior coloring will be much lighter than with brown sugar.  Want a bit more flavor, add a teaspoon of cinnamon to the batter. 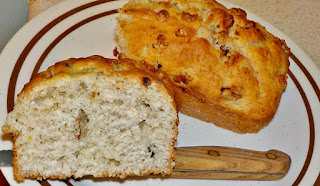 Go nuts!  Go bananas!  Go crazy with laughter!  You will be amazed at how much of your personal pain will diminish.