For two days we had snowfall here in Monticello, Utah. Now anyone who lives in an area that has snowfall has, at one time or another, did the classic stick out the tongue and try to catch snowflakes on it. Come on now, you know you have, especially when you were a child, and I bet you still try it out as an adult. What about making a snowball and putting it in the freezer? Then when summertime came, you looked for it planning to surprise someone when they get hit with it?

When it comes to "eating" snow, the first thing you might think about is the snow cone; shaved or pulverized ice with flavoring poured over it and served in a paper cone. There is a particular type of "cookie" though that you can place in your mouth and let it melt into sugary goodness; or you can mash it up to use as a topping and it will resemble snow. That cookie is called a meringue; made mostly from egg whites and sugar, then baked in the oven at a very low temperature before letting it finish off as the oven cools. Meringue cookies can be made in a vast variety of color and flavor combinations; eaten as is, used as a garnish, even tweeked into a cake called a "Pavlova" which is then topped with whipped cream and fresh berries.

If you're worried about the amount of sugar needed to make meringue cookies, don't! The Splenda brand of sugar substitute and the natural herb Stevia can be used instead; while one cup of Splenda equals one cup of sugar, only one teaspoon of Stevia equals one cup of sugar. You'll also have to use a higher temperature for the baking part of the recipe; basically it's 225F for sugar, 300F for Splenda and 350F for Stevia. 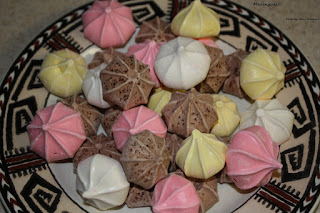 This is going to be a basic recipe for vanilla meringues; you can make different flavored meringues by substituting other flavored extracts for the vanilla. If you want chocolate meringues, add a tablespoon of unsweetened cocoa powder; also add one cup of mini chocolate chips for a double chocolate experience.   To make colored meringues, use drops of food coloring; for example, a few drops of red for pink meringues, but add strawberry extract for that extra flavor boost.   When adding items such as mini chips or shredded coconut, gently fold into the stiffened egg whites so as to not break them.

Beat egg whites in large, clean, metal bowl with electric mixer on medium speed until frothy; add cream of tartar and beat until soft peaks form. Increase speed to medium-high; add sugar, one tablespoon at a time, beating until sugar is dissolved and stiff peaks form.

Drop by rounded teaspoons about one inch apart onto two large baking sheets sprayed with nonstick baking spray; or use a piping bag with decorative tip to form cookies as they are piped onto the baking sheets.

Bake both sheets of meringues for 45 minutes; turn oven off. Leave meringues in the oven for one hour, or until completely cooled. Amount will depend on size of meringues being made; typically 6 dozen if dropping by teaspoon full.