Ah, reading; a combination of eye stimulation leading upwards to the synapses of the brain, and creating, not just pleasure, but knowledge.  In my humble opinion, cellphones, tablets and computers should no longer be allowed for school usage.  Instead, let the children go back to using paper, pencils, notebooks and books, and do actual manual homework.  Let us bring back stimulation to the senses, and development of the synapses and nerve network of the brain.  Lecture over.

A classic in literature is The Count of Monte Cristo by Alexander Dumas (he also wrote The Three Musketeers).  Basic synopsis, Dantes (main character) is imprisoned on the island of Chateau d'If for 13 years, where he plots revenge against those who betrayed him. With help from another prisoner, he escapes the island and proceeds to transform himself into the wealthy Count of Monte Cristo as part of his plan to exact revenge.  There are elements of betrayal, mystery, suspense, vengeance, love, relief and justice; a constant barrage hitting the reader throughout the story.

There has been remake after remake of this novel in film; the best depends upon style, adherence to the story, actors/actresses, musical score and many other features.  Like The Three Musketeers, this novel is a popular classic.

So, how did it become a sandwich?  Around 1910, a popular sandwich, served in Parisian cafes, was called Croque Monsieur, a grilled cheese sandwich containing Gruyere cheese and lean ham, between two slices of crust-less bread, and fried in clarified butter.  In 1912, the first silent film of The Count of Monte Cristo came out.  What better way to honor a French classic (the novel), then to rename another French classic (the sandwich) after it?

Of course, after the film came to the United States, cookbooks began featuring the sandwich, and chefs played with the ingredient content.  In the 1950s, the inclusion of sliced turkey made an appearance.  It was in 1966 that the Monte Cristo sandwich made its appearance, on the menus, at the Blue Bayou and Tahitian Terrace restaurants, in the New Orleans’s Square, of California’s Disneyland.

When explaining what the sandwich is, I usually say, “Think of it as a grilled cheese sandwich, loaded with meat, and cooked up like French toast.”  It is often served with a dusting of powdered sugar, plus a side of a berry jam, or maple syrup.  The bread often used is brioche or challah which are rich in butter, and have a sweet flavor.  Personally, I opt out of powdered sugar, jam and syrup, as the sandwich is buttery sweet as is; that does not mean you should not adventure with it yourself!

Make the sandwich, curl up with a copy of the novel, and give your senses, and brain, pure enjoyment. 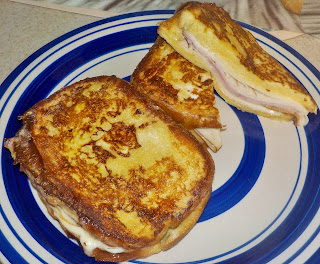 4 slices bread (brioche or challah are best, but Sara Lee Butter Bread is a good option)

Berry jam such as strawberry, raspberry or currant (optional)

In a wide bowl, 1-2 inches depth, whisk eggs, milk, and salt together. 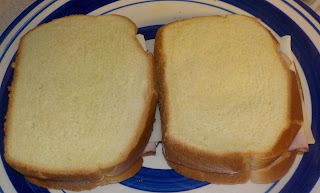 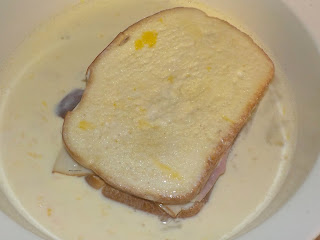 Melt butter in a large skillet over medium low heat.  Dip each sandwich in the egg mixture; turning to coat both sides.  Add the sandwiches to the hot skillet and cook until golden brown on both sides.  Place lid on skillet, for one minute, to ensure cheese melts and any egg mixture cooks thoroughly. 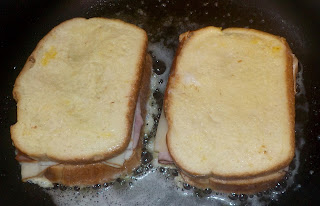 Optional: sprinkle with powdered sugar and serve with a side of berry jam, or maple syrup.