Spiff Up Those Harvested Garden Crops.

August, a time to begin harvesting the bounty of the gardens, and having in mind to store and/or share.  For some gardeners, this may be a second coming for crops such as tomatoes, squashes, peppers, and other hardy vegetables.  Potatoes, onions and garlic are dug up and placed in root cellars; or heavy duty containers layered with straw.  Herbs have been clipped, tied, labeled and hung upside down for drying; their aromatic scents soothing the mind, body and soul.

However, that does not mean that the enticement to eat is thinking about hibernation.  The colors of vegetables tickle the mind with recipe ideas.  The tomato fruit ripened sweet, begging to be sliced and eaten.  Perhaps layered upon toasted rustic bread, smeared with garlic and paired with Buffalo mozzarella and savory leaves of basil.

So comes an introduction to another Italian dish, Pizzaiola.  “Pizza” is within the name, but the inclusion of tomatoes, garlic and onions is as far as it goes.  Hailing from Campania, Naples, Pizzaiola features a Neapolitan style of cooking, focusing on cheaper cuts of meat.  The meat is sliced, or cut into pieces or strips, and cooked slowly in a sauce of tomatoes, olive oil and oregano; some versions include garlic, capers, peppers and basil. It is a way of making a hardy meal with what little you have to work with. So on to my story... 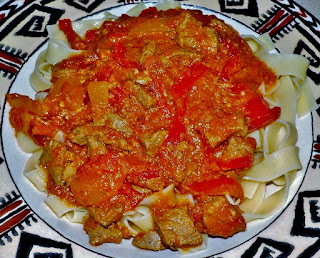 I have made this dish during my first marriage, but my ex-husband always hated it.  Funny thing about him was, his ancestry was Italian and he disliked Italian foods.  Should have known right then there was something not quite right about him; never trust an Italian that does not enjoy food of his own heritage.  However, that is water under the bridge, and my second husband, Roy has enjoyed all I have made.  Well, except for Eggplant Parmigiana which we both dislike.  Oh, I will make it for those who ask for it, I do not discriminate when it comes to culinary cultures. 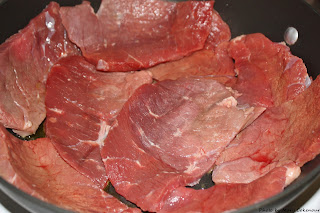 Anyway, back to the Pizzaiola which I typically make with thinly sliced chuck steak which is cheaper, but also fattier in texture.  To tenderize, lightly sprinkle salt, ground black pepper and red wine vinegar (two tablespoons) over the sliced meat (two pounds).  Wrap in plastic and refrigerate overnight.

Defrosted was a one quart container of vegetarian pasta sauce containing a pureed mixture of tomatoes, eggplant (see, it has its uses), zucchini, red bell peppers, garlic, onions and Italian herbs.  However, the garden has been harvested; hitting the vegetable bin: tomatoes, onions, zucchini, mushrooms (store bought) and green bell peppers. The colors would be amazing in the skillet, simmering in my rich sauce with slices of steak!

Now let’s put this masterpiece together, shall we? 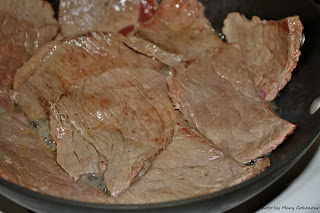 Carefully unwrap the meat on a large plate, or juices will be running all over your counter.  Using a large, deep skillet, add two tablespoons of olive oil, high heat, and sear the meat on both sides.   If you happen to use a leaner cut of beef, it is not very fatty, so leave it in just long enough to get the sear, but not cook it completely. Fattier meats will take a bit longer and you want to discard the melted fat, or you'll end up with an oil slick on your sauce. Yuck! 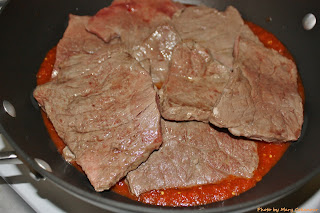 Give the skillet a wipe down with a paper towel; now spread two cups of sauce in the pan and lay the beef on top of the sauce. 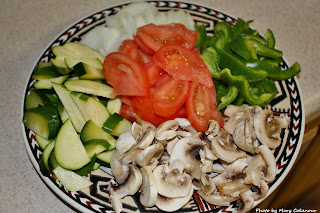 Typically I would just use sliced onions, but this time I was going for the whole color palette. Two tomatoes cut into wedges, 1/4 lb. of sliced white mushrooms, two sliced zucchini, one julienned green bell pepper, and one sliced large onion. There was no need for extra minced garlic or Italian herbs as it was already in my sauce. Yes, yes, some of these vegetables were already in the vegetarian pasta sauce, but they had been cooked down and pureed. We were going for texture here. Spread the vegetables over the steak. 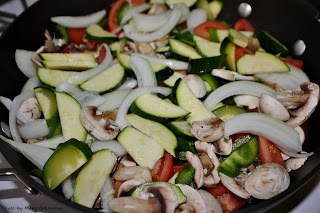 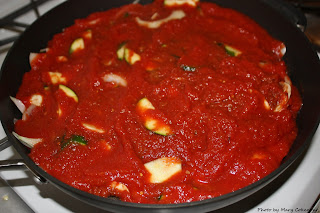 Spread remaining sauce over all and work it between the vegetables with a spoon. 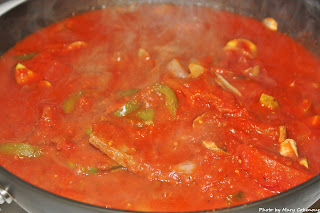 Cover the skillet with a lid, set the heat on medium-low and let it cook for two hours. Occasionally stir the sauce throughout the vegetables and meat; if the sauce is bubbling hard and splattering, reduce the heat to low. Since it will be cooking for two hours, you do not have to rush to make your pasta, but have it ready once the Pizzaiola is done. 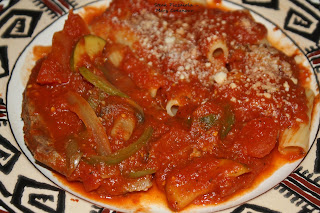 Usually the Pizzaiola is served over Rigatoni; this tubular pasta with ridges catches onto, and holds the sauce so well.  Use a slotted spoon to remove the meat and as much of the veggies as you can to a serving platter. Take your cooked pasta and immerse it into the sauce remaining in the skillet and let it cook together for about five minutes. This will allow the pasta to pick up the flavors from the sauce.

There should be eight servings to this meal, however, Roy overindulged and doubled up on his plate.  I just love that man, and he so loves my cooking.  Watching him eat, and the pleasure on his face, it just fills my heart with love and joy.

Anyway, if you want to impress your family and/or guests, consider making this Italian dish.

Thinking to yourself, how do I make this a more romantic meal for two?  Embark on a new adventure into Pizzaiola, making it a luxurious cruise using London broil. The evening before,   cut the London broil into one inch pieces, seasoned with salt, ground black pepper and a sprinkling (two tablespoons) of red wine, instead of red wine vinegar.  Encased in plastic wrap, the meat marinates overnight, the red wine infusing a heady flavor, and tenderizing as well.   Spoon the Pizzaiola over long, flat strands of Tagliatelle, and perhaps have a Lady and the Tramp moment. Do not forget the candlelight!

Posted by Mary Cokenour at 9:13 AM 0 comments