Have you ever been to an Italian wedding, or should I say an Italian-American wedding? They are usually on the grand scale where the food seems to take center stage more than the bride and groom themselves. I've been to many in my lifetime, but I have to admit that soup was frequently an uninvited guest. So where did the idea of "Italian Wedding Soup" come from then? 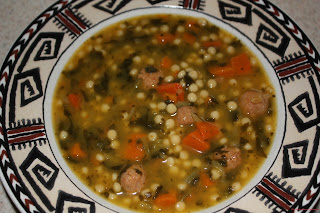 Italian Wedding Soup has its origins in the United States, but is definitely influenced by such Italian soup varieties as Tuscan Soup or Minestrone. The Italian phrase "minestra maritata", translated to "married soup", has been misconstrued into making us believe that this is a typical item served at Italian wedding feasts. Actually the phrase refers to the perfect "marriage" of vegetables to meat or poultry, and can be applied to almost any soup in general if you think about it.

Typically, the Italian wedding soups we see served in restaurants, or marketed in cans by Progresso and Campbells, has miniature meatballs, diced vegetables and orzo in a thin to semi-thick broth.  In fact I've posted my own version which I call simply Meatball Soup, but I use cubed potatoes instead of orzo as my filler. Another version I have eaten was called "Escarole Soup" which was served at Easter time containing mainly escarole and shredded chicken in a seasoned broth.  That is the wonder of this soup; tiny meatballs, sausage or chicken, with or without pasta or beans, with or without a leafy vegetables such as spinach, kale or escarole....no version is wrong.

Clicking on Tuscan Soup or Meatball Soup will bring you to my posted recipes.  For the Meatball Soup, leaving out the potatoes and adding 2 cups of a leafy vegetable (spinach, kale or escarole) and 1 cup of orzo will get you to what is in the photo above.  The orzo goes into the soup pot uncooked of course and gets cooked during the simmering process.   For my meatballs, I use a mixture of ground beef and ground turkey; seems to give the meatballs a smoother, more comforting mouth feel than when only beef is used.  A hint if you intend on making a version with shredded chicken in it; melt some mozzarella over the soup before serving and it becomes absolutely decadent.

Have fun when making your own version of Italian Wedding Soup.  Enjoy!